2013: Ukrainian diaspora: all eyes on Ukraine 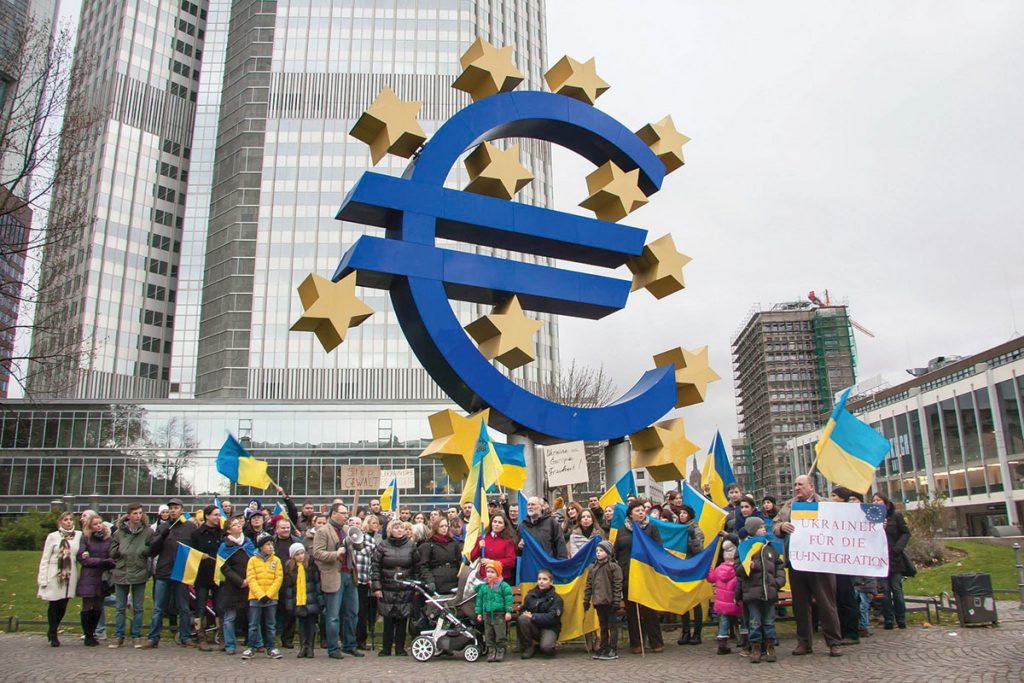 Oleksiy Yemelyanenko
Participants of the demonstration held in Frankfurt, Germany, on December 1 in support of Ukraine’s Euro-Maidan.

The year 2013 brought the Ukrainian diaspora together on numerous occasions; most recently, to stand in solidarity with Ukrainians protesting at the Euro-Maidan in Kyiv beginning in November. Euro-Maidan actions sprang up spontaneously around the globe in places such as Stockholm, Rome, Frankfurt, London, Oslo, Paris, Munich, Hamburg, Brussels, as well as in cities in Spain, Portugal, Australia, Moldova, Georgia, Poland, the Baltic states and, of course, numerous cities across Canada and the United States. According to various media sources, such protests took place in about 50 cities.

The Ukrainian Weekly was flooded with reactions in November in response to the Ukrainian government’s decision to stop working on the EU Association Agreement.

The Association of Ukrainians in Great Britain stated: “The decision is a betrayal of European aspirations of the majority of Ukrainian people. “ The Ukrainian Congress Committee (UCCA) wrote: “The UCCA is deeply concerned with the future trajectory of Ukraine and it not being aligned with European values.” The Ukrainian Canadian Congress (UCC) stated: “This unilateral decision by the government of Ukraine does not conform to the European hopes and aspirations of the Ukrainian people, puts a stop to reform and the path of European integration and the modernization of the Ukrainian economy to put it in line with international standards.” The Australian Federation of Ukrainian organizations responded to the decision by stating, “President Yanukovych had the opportunity to make history and bring Ukraine into Europe. Instead, he has de facto approved the current situation in Ukraine of denial of human and cultural rights, and endemic corruption.”

On November 30, The Weekly again shared statements from many diaspora organizations speaking out against violence against the peaceful protesters of Euro-Maidan in Kyiv. Among the statements, the World Federation of Ukrainian Women’s Organizations (WFUWO) expressed outrage regarding “the numerous acts of violence on the part of law enforcement against the youth, students and participants of the peaceful protest, including a beating of more than 40 Ukrainian and foreign journalists.” The Ukrainian American Bar Association called upon the Ukrainian legal community, especially the judiciary, “to stand straight and reaffirm their allegiance to the Ukrainian nation and the principle of the rule of law and justice.” The Council of Bishops from the Ukrainian Orthodox Church wrote, “The authorities must respect the protesters who have simply exercised their political and constitutional – and most importantly – God-given rights to peacefully gather in protest and demonstration.” And finally, the Ukrainian National Association stated, “We ask the American government to support the democratic movement in Ukraine and ask that the U.S. impose targeted economic sanctions, including the freezing of assets and restrictions on visas against those individuals responsible for human rights abuses in Ukraine.”

From the beginning of 2013 the Ukrainian World Congress (UWC) had been particularly active on the issue of Euro-integration for Ukraine. The UWC is the international coordinating body for Ukrainian communities in the diaspora representing the interests of over 20 million Ukrainians in 33 countries. This year its president, Eugene Czolij, traveled to multiple countries to discuss issues facing Ukraine today. Among his stops were Germany, Poland, Estonia, Lithuania, Italy and France. In late February, Mr. Czolij traveled to Belgium to meet with high-ranking officials of the European Union (EU) to discuss the importance of signing the EU-Ukraine Association Agreement. There the EU officials expressed their support for Ukraine’s Euro-integration, stressing, however, that Ukraine’s authorities must take concrete steps to similarly demonstrate their commitment to the EU.

In early March, Mr. Czolij visited the U.S. capital to meet with U.S. officials, diplomats of several countries and representatives of American analytical institutions to discuss the issues of Ukraine’s democratization and Europeanization, underscoring their importance to Kyiv as well as to the strategic interests of both Europe and the United States. Mr. Czolij stressed that the EU Association Agreement would provide a stimulus for democratic, social and economic progress in Ukraine. At the same time, it would prevent Ukraine from being pulled into the Eurasian Union, which poses the threat of creating a new Soviet Union.

In May, The Weekly reported on the UWC’s selection of a logo for the 80th anniversary commemorations of the Holodomor. Created by Oleh Lesiuk, a Canadian artist of Ukrainian descent, the logo depicted five stalks of wheat delicately bound with a black ribbon. The wheat serves as a reminder of the devastation perpetrated by the totalitarian Soviet regime and symbolizes Ukraine’s determination in the struggle to live and prosper.

In June, Mr. Czolij spoke at a community meeting at the Ukrainian Youth Center in Montreal. The focus of his address was once again the significance of Ukraine’s Euro-integration in securing Ukraine’s independence. On June 22, the UWC president touched on these same issues at a National Leadership Reception sponsored by the Ukrainian Canadian Congress in Vancouver, British Columbia.

One of the highlights of the year for the UWC was the 10th Ukrainian World Congress held in Lviv on August 20-22 with 208 delegates representing 27 countries participating in its deliberations. The delegates were joined by 350 guests who traveled from around the world, as well as all regions of Ukraine, to observe the congress proceedings. The UWC’s motto this year was “Contra Spem Spero.” (Hope against Hope) These words, penned by the renowned Ukrainian poet Lesia Ukrainka, symbolized the faith of the 20-million-strong diaspora in Ukraine’s better future despite the many challenges ahead.

The 10th Ukrainian World Congress was dedicated to the memory of the victims of the Holodomor and began with a procession and memorial service at the Taras Shevchenko monument in the city’s main square. Representatives of Ukraine’s governing authorities and leaders of the opposition, most notably, Vitali Klitschko, Arseniy Yatsenyuk, Yuriy Lutsenko and Oleh Tiahnybok were present at the congress. Vice Prime Minister Oleksander Vilkul and Verkhovna Rada Vice-Chairman Ruslan Koshulynskyi represented the government of Ukraine at the opening session.

The congress also received a special message from imprisoned opposition leader Yulia Tymoshenko, in which she wrote: “Right now there is no greater priority than the signing of an agreement between Ukraine and the European Union on political association and a comprehensive free trade area. For me this isn’t a matter of my liberty or imprisonment, it’s a matter of the existence of our country, because joining the European Union will guarantee our independence and protect Ukraine from returning to a new empire.”

A few days after the UWC sessions, newly re-elected Mr. Czolij met with President Viktor Yanukovych. The Ukrainian president commented, “It is very important that foreign Ukrainians united in the [Ukrainian World] Congress have an opportunity not only to experience the situation in Ukraine, but also to have certain influence.”

The year was also action-packed for the World Federation of Ukrainian Women’s Organizations. On March 4 a delegation of 14 women from WFUWO, led by its president, Orysia Sushko, attended the 57th session of the Commission on the Status of Women (CSW) at the United Nations headquarters in New York. The organizing theme for this year’s session was “The prevention and elimination of all forms of violence against women and girls.”

The mission of the WFUWO is to support the dignity and integrity of women of Ukraine and Ukrainian women in émigré communities by supporting adherence to international standards of human rights, raising public awareness of problems and violations, maintaining the Ukrainian language and culture, cultivating awareness of Ukrainian history, family and social traditions, as well as supporting modern Ukraine’s development into an independent and stable democracy with respect for the rule of law. Established 65 years ago in Philadelphia, the WFUWO is now based in Toronto and unites 27 organizations from 17 countries.

Later in 2013, in August, the WFUWO held a successful annual meeting at the Lviv Polytechnic National University. Twenty-five delegates and guests of 12 WFUWO member organizations participated in the meeting, as well as 30 members of women’s organizations in Ukraine. They were invited to share information on topics of interest to all women and to learn more about the WFUWO’s multifaceted activities. One focus of the conference was a roundtable discussion about current issues women are facing and possible solutions.

In June, delegates representing national bodies of Plast Ukrainian Scouting Organization from around the world gathered in Whippany, N.J., for the18th Conference of Ukrainian Plast Organizations (known in Ukrainian as KUPO). Delegates heard reports about Plast activities, approved decisions that affect the scouting organization’s work worldwide and elected leadership for the next term. A special focus was the recently celebrated Plast centennial, which was marked in 2012 in all countries where Plast is active. Also discussed was the possibility of creating Plast groups in various countries such as Ireland, Spain, Italy and Portugal, where many Ukrainian émigrés live today, and Estonia, Latvia, Romania, Serbia and Bulgaria, where there is a significant Ukrainian diaspora. Plast has more than 5,000 members in Ukraine, where it has grown by 21 percent since 2009, and nearly 9,000 worldwide. The newly elected leadership of Plast was split almost equally between Ukraine and the diaspora.

In July, The Weekly reported on the Ukrainian Diaspora Studies Initiative at the Canadian Institute of Ukrainian Studies (CIUS), which received materials relating to the history of Ukrainian life in the Far East, a gift from Nicholas and Pat Melnik. Among the donated artifacts were priceless photographs of individuals and Ukrainian community life in China; personal documents; correspondence between members of Ukrainian organizations in North American and Europe and representatives of Ukrainian communities in Tientsin and Shanghai, China (from 1930s to 1947); and individual issues of newspapers in China and the Russian Far East.

These materials constitute important sources for the study of the once vibrant Ukrainian community in China and its ties to the diaspora in other parts of the world. According to an estimate, there were once 100,000 Ukrainians living in China. Mr. Melnik was born in Shanghai in 1935, and emigrated to North America in 1948. The CIUS Initiative noted: “We are extremely indebted to the Melniks for having kept these materials in good condition over the decades and for their efforts in finding repositories that can continue to preserve them for future generations.”

That Ukrainians were and are active around the globe was evident also in news about on St. Jude Ukrainian Orthodox Mission in Tokyo, a small mission of the Ukrainian Orthodox Church – Kyiv Patriarchate. The pastor of St. Jude’s is U.S.-born Father Paul Koroluk, who insists that mission is the outcome of the dedicated work of the faithful. St. Jude Mission is committed to its Ukrainian roots and traditions, yet balances them with openness to people of all cultures. The Rev. Koroluk is proud of a recent accomplishment of the mission: the first modern Japanese translation of the Liturgy of St. John Chrysostom.

The Rev. Koroluk stated, “Although we were founded by Ukrainians, and try as hard as we can to be true to our roots, we are definitely a Church in Japan – a Japanese mission. We are multilingual and multicultural. One part of our mission is to make sure that there is a home where Ukrainians living in Japan will feel safe and comfortable, without having to abandon a part of themselves.”