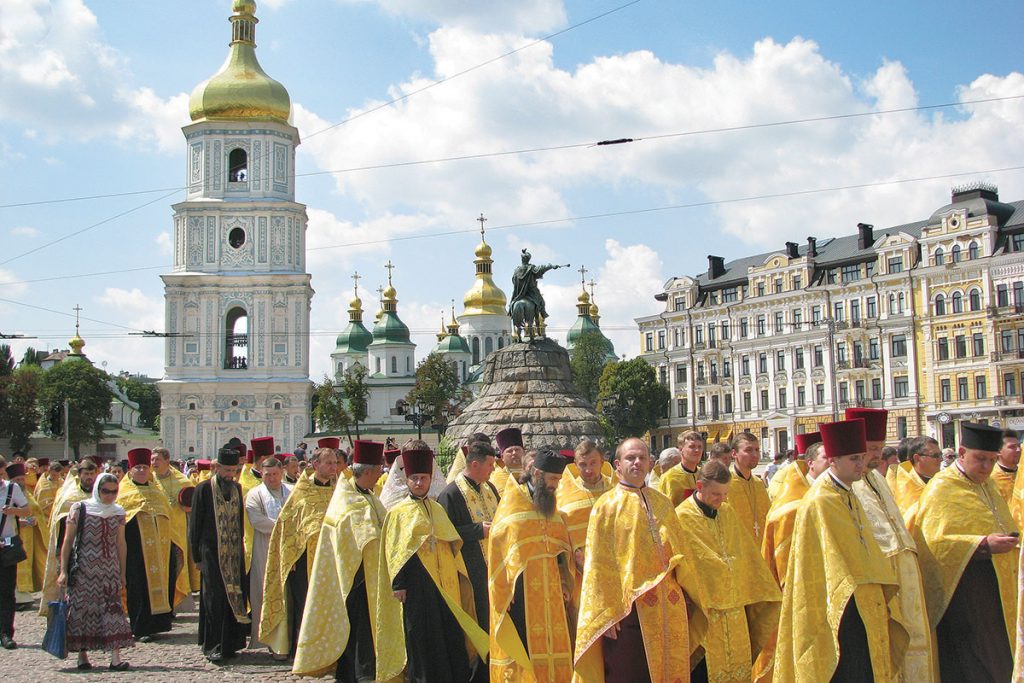 Zenon Zawada
Priests of the Ukrainian Orthodox Church – Kyiv Patriarchate walk past St. Sophia Cathedral in the July 28 pro- cession to commemorate the 1,025th anniversary of the baptism of Kyivan Rus’.

Church news in 2013 was kicked off on January 19 when Pope Benedict XVI, as announced by Archbishop Luigi Ventura, apostolic nuncio to France, elevated two new Ukrainian Catholic exarchates in Great Britain and France to eparchies. Thus, the Eparchy of the Holy Family was established in London and the Eparchy of St. Volodymyr the Great in Paris. Bishop Hlib Lonchyna has served as the exarch for Great Britain and was elevated to eparchial bishop of London and Bishop Gudziak, exarch of France, was elevated to eparchial bishop of Paris. The two eparchies include tens of priests and tens of thousands of faithful across Great Britain, France, Belgium, Luxembourg, the Netherlands and Switzerland.

Cardinal Lubomyr Husar, the former primate of the Ukrainian Greek-Catholic Church, celebrated his 80th birthday on February 26, with a hierarchical divine liturgy celebrated at St. George Ukrainian Catholic Cathedral in Lviv by Patriarch Sviatoslav Shevchuk. On February 28 a prayer service was held in Kyiv at the Patriarchal Cathedral of the Resurrection of  Christ to mark the Cardinal’s birthday.

On March 13, Patriarch Sviatoslav commented on newly elected Pope Francis and his ties to Ukrainian Catholics, including serving the Eastern-rite divine liturgy with the Rev. Stepan Chmil in Rome and later being involved in the Rev. Chmil’s beatification process. Pope Francis was archbishop of Buenos Aires, Argentina, when Bishop Sviatoslav, now patriarch, was stationed in Argentina. As a young bishop, Patriarch Sviatoslav was guided by the archbishop, who was then known as Cardinal Jorge Mario Bergoglio. Under his guidance, the cardinal showed his support for Ukrainian Catholics in Argentina and his humble ways. Prior to the new pope’s election, Patriarch Sviatoslav celebrated a divine liturgy at the Ukrainian Church of Ss. Sergius and Bacchus in Rome, a gift from Pope Urban VIII to the Ukrainian people, during the conclave of cardinals following Pope Benedict’s announcement of his retirement.

On April 20 Patriarch Sviatoslav, head of the Ukrainian Greek-Catholic Church (UGCC), and Bishop Gudziak, head of the UGCC’s Department of Foreign Relations, met with Ecumenical Patriarch Bartholomew of Constantinople at his residence in Istanbul, Turkey. The trip was part of Ukraine marking the 1,025th anniversary of the Baptism of Kyiv-Rus’. In an effort to strengthen ties between the Orthodox and Catholic Churches in Ukraine, Patriarch Sviatoslav recommended the renewal of the Kyiv Study Group, which included theologians and scholars of the Ukrainian Orthodox Churches in the U.S. and Canada and those of the UGCC.

On May 26 Ukrainian Catholics in Paraguay enthroned Bishop Daniel Kozlinskyi as apostolic visitator for Ukrainian Greek-Catholics in Paraguay at the Roman Catholic Cathedral of the Annunciation of the Blessed Virgin in Encarnacion, Paraguay. The liturgy was concelebrated by Bishop Kozlinskyi and Bishop Ignacio Gorgoza Izaguirre, the local Roman Catholic eparch, Msgr. Mislav Khodzhych, the Rev. Volodymyr Fylypiv and priests from the two rites. This was the first time that a Byzatine-rite divine liturgy was celebrated in the city’s Roman Catholic cathedral. A reception followed the enthronement, with a cultural program held in the local center of the education organization Prosvita.

On May 10-11, members of the Ukrainian Catholic Education Foundation, the fund-raising arm of the Ukrainian Catholic University in Lviv, met in Chicago to discuss the opening of a new building on the university’s campus at Stryisky Park, to re-cap the fund-raising efforts of the past year and to plan future events. The UCU has announced that a formal partnership was signed between UCU and the Ukrainian Free University in Munich and the University of Winnipeg. Other presentations highlighted other expansion projects for UCU and pilgrimage trips.

Dr. Leon Chameides, a retired physician and Holocaust survivor, visited St. Michael the Archangel Ukrainian Catholic Church in Hartford, Conn., on June 2. His recently published memoir “Strangers in Many Lands” recounted his wartime experience and how he was sheltered by Metropolitan Andrey Sheptytsky at the Univ Monastery near Lviv, where he spent two years in hiding from the Nazis. He was the son of one of the leading rabbis of Lviv and most of his family were killed during the Holocaust. Dr. Chameides was spared their fate thanks to the foresight of his father and the network of Ukrainian Catholic clergy and activists. Several other clergy have been recognized by Yad Vashem and the Vatican for their works in saving Jews from the Nazis, but Metropolitan Sheptytsky’s work has yet to be recognized by either group. Dr. Chameides has testified before the Canadian Parliament, and has been joined by Chief Rabbi Yaakov Bliech of Kyiv and Patriarch Sviatoslav in speaking about Sheptytsky’s legacy.

The UOC-U.S.A.’s two-week mission trip to the Znamianka Orphanage in the Kirovohrad Oblast and the LOGOS Center homeless shelter in Kyiv concluded on June 14. The 11-member team was led by Bishop Daniel, Olga Coffey and Ivanna Wronsky. The team delivered more than 35 suitcases filled with humanitarian aid and toys to the orphanage, and purchased 375 pounds of meat for the facility. Bishop Daniel presented a $5,000 check to the LOGOS Center, coordinated by the St. Andrew Society of the UOC-U.S.A., and donated a heated tent for additional housing for the homeless.

On July 26 Russian Orthodox Patriarch Kirill visited Kyiv for the 1,025th anniversary celebrations of the Baptism of Kyiv-Rus’. The invitation-only moleben was held on St. Volodymyr Hill on the Dnipro River and included Russian and Ukrainian presidents as well as nine Orthodox patriarchs. Patriarch Kirill brought the relics of St. Volodymyr the Great to Kyiv, which are kept at the Kremlin in Moscow. The largest pieces of the relics were given to Moscow’s counterparts in Kyiv. An eight-foot tall X-shaped cross in honor of St. Andrew the First-Called was also brought to Kyiv by Patriarch Kirill for pilgrims to venerate. A Sunday divine liturgy was celebrated by Pariarch Kirill at St. Volodymyr Cathedral with approximately 20,000 in attendance. The visit of the Russian patriarch was protested by Svoboda and the National Rukh of Ukraine parties at European Square near the Dnipro Hotel.

In August, The Weekly reported about a book that Cardinal Jorge Mario Bergoglio, now known as Pope Francis, wrote in 2010. The Spanish-language book “On Heaven and Earth: Pope Francis on Faith, Family and the Church in the 21st Century,” which was re-released in 2013 (co-authored by Rabbi Abraham Skorka, and translated by Alejandro Bermudez and Howard Goodman), mentions the Holodomor among the three greatest genocides of the 20th century, including the Armenian Genocide of 1915 by the Turks and the Holocaust.

More than 20,000 pilgrims attended the consecration of the Patriarchal Cathedral of the Resurrection of Christ on August 17-18 in Kyiv, led by Patriarch Sviatoslav. The state-of-the-art church features a 24-hour Internet broadcasting site (www.ugcc.tv) and contemporary architecture. The construction of the cathedral (estimated at $12 million) marked a shift for the center of the Church, which was based in Lviv at St. George Cathedral for 380 years. During the pilgrimage, a weeklong Synod of Bishops of the Ukrainian Greek-Catholic Church was held; its central theme was “New Evangelism.” The consecration also coincided with the 10th Ukrainian World Congress on August 20-22 in Lviv and celebrations marking the 1,025th anniversary of the baptism of Ukraine.

A new 43,000-square-foot, four-story academic building at the Ukrainian Catholic University in Lviv was opened on September 3. The building houses the school’s Institute of Leadership and Management, School of Bioethics, faculties of history and humanities, and the Lviv Business School and its Idea Lab. This was the second major new construction project on the UCU campus in Lviv, and there are plans for a modern library and a church dedicated to 20th century martyrs and a pastoral center. That same day, Bishop Gudziak, who served as the university’s rector, was appointed as president of the university. The Rev. Bohdan Prakh was named the school’s rector.

On September 15 the Ukrainian Catholic University dedicated its Boston Seminar Room (formerly Room 306) in the new academic building on the university’s campus in Lviv. The room was funded by the Boston Chapter of the Friends of UCU, and features a plaque acknowledging the support of the Greater Boston community. A weeklong trip was organized for representatives from the Boston Chapter, who toured the Lviv area sites, including museums, churches and monasteries.

On September 27 the Ukrainian Eparchy of St. Volodymyr in Paris purchased the church near St. Vincent Abbey which Queen Anna Yaroslavna of France founded in 1060. Senlis, located 45 kilometers outside of Paris, is where the daughter of Grand Prince Yaroslav the Wise lived in the 11th century. The church is planned to house the Anna Yaroslavna Cultural Center, to represent and promote Ukrainian culture and Ukrainian-European cooperation. The church, which was purchased for 203,000 euros, opened its doors to the public with a hierarchical divine liturgy on November 16. The next day, a Holodomor memorial service was held at Notre Dame Cathedral in Paris on November 17. Nearly $1.5 million is needed to complete the restoration of the church in Senlis.

The UOC-U.S.A. held its 20th Regular Sobor on October 17-20 in South Bound Brook, N.J. The triennial gathering of clergy and faithful is a forum for the discussion of the progress of the Church’s various ministries and to set the course for its future direction; this year’s theme was “Am I My Brother’s Keeper?” A new award was inaugurated at the Sobor, The Great Benefactor – Blahodiynyk – of the Ukrainian Orthodox Church, and was presented to the Very Rev. William Diakiw, Emil Skocypec, Valentyna Kuzmycz, Nadia Mirchuk and Dr. Anatolij Lysyj. A new icon, “The South Bound Brook Icon of the Offering of First-Fruits” by iconographer Cheryl Pituch was gifted to the Church and blessed by the hierachs. It is now featured in the rotunda of the Consistory building. Copies of the icon have been made for presentation in educational programs in the Church’s Office of Stewardship and Development. A farewell divine liturgy on October 20 with 300 people in attendance concluded the Sobor weekend.

The Anti-Defamation League (ADL) honored Metropolitan Sheptytsky for his heroism in sheltering Jews from the Nazis during the Holocaust on October 31. During the league’s annual meeting, at a luncheon attended by more than 200 people at the Grand Hyatt Hotel in New York, Metropolitan Sheptytsky was posthumously awarded the Jan Karski Courage to Care Award by Abraham Foxman, national director for the ADL. The metropolitan’s grandnephew, Prof. Jerzy Weyman, who traveled from Poland, accepted the award on behalf of the family. Bishop Pual Chomnycky read a letter from Patriarch Sviatoslav, who thanked the ADL for bestowing the honor on Metropolitan Sheptytsky. The Ukrainian Jewish Encounter (UJE) continues to work with Chief Rabbi Yaakov Bliech of Kyiv and James Temerty in promoting the beatification of Metropolitan Sheptytsky by the Vatican. The UJE is privately organized, founded in 2008 by Mr. Temerty, and engages Ukrainians of Jewish, Christian and other heritages in Ukraine and Israel and the diaspora, working with scholars, civic leaders, artists, governments and the broader public in an effort to promote stronger and deeper relations between the two peoples.