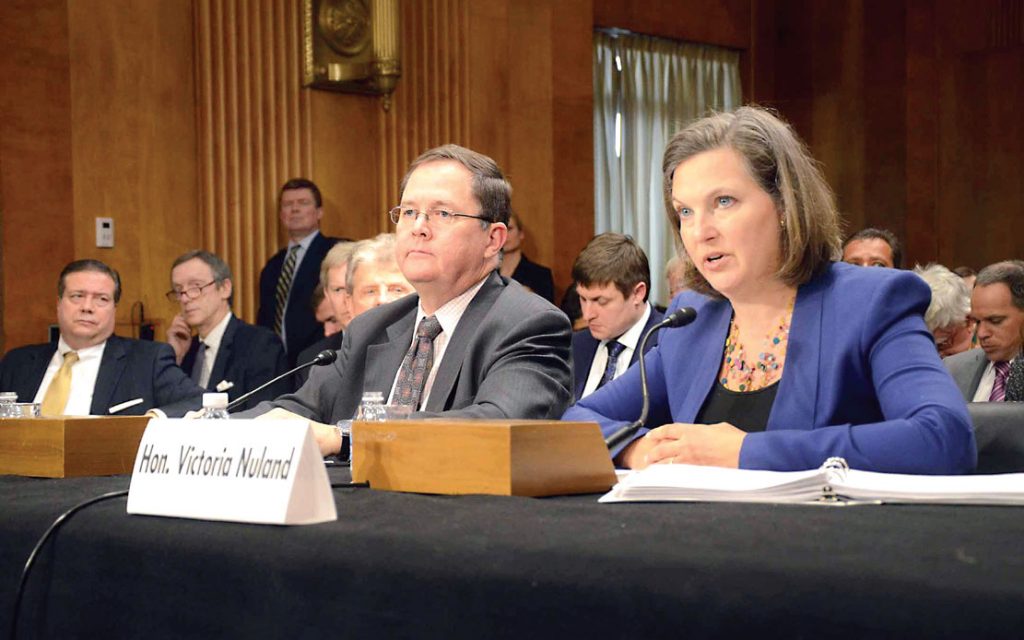 On July 18 at the Security Council she spoke of the downing of Malaysia Airlines Flight 17, expressing condolences and underscoring that “a full, credible and unimpeded international investigation must begin immediately.” She said MH17, carrying 298 people “was likely downed by a surface-to-air missile, an SA-11, operated from a separatist-held location in eastern Ukraine” and pointed out that “Because of the technical complexity of the SA-11, it is unlikely that the separatists could effectively operate the system without assistance from knowledgeable personnel. Thus, we cannot rule out technical assistance from Russian personnel in operating the systems.” Furthermore, she said, “This also follows a pattern of actions by Russian-backed separatists. On June 13, separatists shot down a Ukrainian transport plane, carrying 40 paratroopers and nine crew. On June 24, as this [Security] Council was meeting to welcome Ukraine’s unilateral ceasefire, we received word that separatists downed a Ukrainian helicopter, killing all nine on board. On July 14, separatists claimed credit for the downing of a Ukrainian military cargo plane, flying at 6,000 meters, and on July 16, they claimed credit for the downing of a Ukrainian fighter jet.” She noted: “The context for yesterday’s horror is clear: separatist forces – backed by the Russian government – continue to destabilize Ukraine and undermine the efforts of Ukraine’s elected leaders to build a democratic Ukraine that is stable, unified, secure and able to determine its own future.”

In that same address on July 18 she cited the case of “Ukrainian pilot Nadiya Savchenko, who has long had a distinguished career in the Ukrainian military, was taken by separatists in mid-June. She is now being held – where? In a prison in Voronezh, Russia. According to the Ukrainian government, she was transferred to Russia by separatists.”

On August 28, at what she said was “our 24th session to try to rein in Russia’s aggressive acts in Ukraine,” Ambassador Power noted that on August 26, after President Putin met with President Poroshenko in Minsk and spoke of the need to end the bloodshed in Ukraine, more Russian forces were deployed in Ukraine. “Yet the same day, satellite imagery shows Russian combat units – combat units – southeast of Donetsk, in eastern Ukraine. That same day in Luhansk, Ukraine detained regular Russian Army personnel from the 9th Brigade. In response, Russia claimed the soldiers had wandered into Ukrainian territory ‘by mistake.’ This, supposedly, in a time of conflict along one of the most carefully watched borders in the world.”

Secretary of State Kerry also was busy with developments in Ukraine. He visited Kyiv on March 4 to demonstrate U.S. support for Ukraine and its new leaders, meeting with Prime Minister Arseniy Yatsenyuk and acting President Oleksander Turchynov. He visited the Fallen Heroes Shrine that had emerged on Instytutska Street in central Kyiv, placing a candle and flowers at the memorial. Mr. Kerry also announced an immediate $1 billion loan guarantee to support Ukraine’s recovery. “We are currently working with the U.S. Treasury Department and others to lay out a broader, more comprehensive plan,” he said. “We will provide the best expertise available to help Ukraine’s economy and financial institutions repair themselves.”

In related news, the U.S. Embassies in Kyiv and Moscow, and the State Department on March 5 issued documents countering Russian propaganda and disinformation about developments in Ukraine. One document set the record straight on the legitimacy of Ukraine’s government, and the other rebutted 10 false claims made by Russian President Putin. In July, the State Department followed up with a fact sheet on “Russia’s Continuing Support for Armed Separatists in Ukraine and Ukraine’s Efforts Toward Peace, Unity and Stability.”

President Obama and Secretary Kerry met with Ukraine’s Prime Minister Yatsenyuk when he visited Washington on March 12-13. Accompanied by Foreign Affairs Minister Andriy Deshchytsia and Ukraine’s Ambassador to the U.S. Olexander Motsyk, he also had meetings with Vice-President Biden, Treasury Secretary Jacob Lew, House Majority Leader John Boehner and House Minority Leader Nancy Pelosi, before heading off to New York for meetings at the United Nations, as well as an address before the Security Council on March 13.

On March 17, President Obama stated unequivocally that “the future of Ukraine must be decided by the people of Ukraine. That means Ukraine’s sovereignty and territorial integrity must be respected, and international law must be upheld. And so, Russia’s decision to send troops into Crimea has rightly drawn global condemnation.” Furthermore, he said he told President Putin that “the referendum in Crimea was a clear violation of the Ukrainian constitution and international law, and it will not be recognized by the international community,” and he announced the imposition of sanctions on specific individuals responsible for undermining the sovereignty, territorial integrity and government of Ukraine, as well as the authorization of sanctions on Russian officials – entities operating in the arms sector in Russia and individuals who provide material support to senior officials of the Russian government. “And if Russia continues to interfere in Ukraine, we stand ready to impose further sanctions,” he stated. “…throughout this process, we’re going to stand firm in our unwavering support for Ukraine. …the United States stands with the people of Ukraine and their right to determine their own destiny. We’re going to keep working with Congress and our international partners to offer Ukraine the economic support that it needs to weather this crisis and to improve the daily lives of the Ukrainian people.”

Ten days later, on March 27, the Senate unanimously approved, via voice vote, an aid package for Ukraine that included $1 billion in loan guarantees and some $150 million in direct assistance. At the same time, the House of Representatives approved a similar package by a vote of 399 to 19. Then, on April 1, the House passed the Support for the Sovereignty, Integrity, Democracy and Economic Stability of Ukraine Act of 2014, the same bill the Senate had passed the previous week, by a vote of 378 for and 34 against. “With Russian forces massing on Ukraine’s borders, tension and fear is spreading throughout the region, and our legislation sends a clear signal – that Congress will not stand for further violations,” said House Foreign Affairs Committee ranking member Rep. Engel.

Vice-President Biden visited Kyiv on April 21-22, telling the people of Ukraine they “should have the right to choose their own future” and declaring the United States’ readiness to assist Ukraine, which he said faces “humiliating threats” and “very daunting problems,” in seizing a chance to create national unity. “As you all know well, we have a significant Ukrainian American population,” Mr. Biden told Ukraine’s national deputies. “We stand with you. And it is not just a foreign policy judgment, it is a personal – it’s an emotional commitment, as well, by millions of Americans.” Mr. Biden also told his audiences in Kyiv that the U.S. stands ready to help Ukraine’s economy but that Ukraine must step up efforts to root out abuses within its political system and “fight the cancer of corruption.” Noting that the country was facing unrest and uncertainty, Mr. Biden said that “this is a second opportunity to make good on the original promise made by the Orange Revolution. This is a genuine opportunity to get right what is always difficult to do the first time when coming out from under the oppression or control of another power.” Referring to the upcoming presidential election, he added, “you have an opportunity, a chance to bring about an era of reform and democratic renewal that you all hoped for two, five, 10, 15 years ago to lay the groundwork for an even more united and more prosperous Ukraine.”

The vice-president was the highest-ranking U.S. official to visit Kyiv since Russia’s annexation of Crimea. He met with acting President Turchynov and Prime Minister Yatsenyuk, as well as with civil society leaders in Kyiv to discuss their key role in supporting Ukraine’s democratic institutions. Mr. Biden announced a new package of U.S. assistance totaling $50 million to help Ukraine pursue political and economic reform and strengthen the partnership between the United States and Ukraine. Included in that amount was $11.4 million to help conduct the presidential election in Ukraine, as well as an increase of $8 million in non-lethal security aid to Ukraine’s armed forces and border guards (a package worth $10 million had been announced earlier). In addition, he said the U.S. would provide expertise to help Ukraine reduce its reliance on Russian energy supplies.

On April 28, the U.S. announced new sanctions in response to “Russia’s continued illegal intervention in Ukraine and provocative acts that undermine Ukraine’s democracy and threaten its peace, security, stability, sovereignty and territorial integrity,” as noted in a statement released by the White House Office of the Press Secretary. The U.S. noted that Russia had refused to follow through on its commitments made at talks in Geneva that brought together the U.S., the European Union, Ukraine and Russia. As the year wore on and Russia continued its aggression, the U.S. announced more and more sanctions. Among them: in mid-September, debt financing restrictions for sanctioned banks were tightened, and more Russian financial institutions and companies, including energy companies and defense technology firms, were added to the list of those sanctioned. At the end of the year, on December 17, President Obama issued an executive order banning U.S. exports of goods, technology or services to Ukraine’s Crimea region. He also authorized the Treasury Department to impose sanctions on individuals and companies operating in the region. In announcing the new measures, the U.S. president called on Russia to end its annexation of Crimea.

During the third week of April, Ukraine’s Vice-Minister of Foreign Affairs Danylo Lubkivsky visited Washington and New York to discuss the current situation in his country with U.S. and U.N. officials, representatives of the Ukrainian American community, Jewish American organizations and other interested parties. His main message was that Russia’s policy toward Ukraine was now showing its true colors – “completely chauvinistic and aggressive and unacceptable in a community of civilized nations.” This, he said, is a major problem not only for Ukraine for the whole word. Another prominent visitor arrived in mid-August, Mustafa Nayyem, a Ukrainian journalist and political analyst who called for the people of Ukraine to come out onto the Maidan in November 2013 after President Yanukovych rejected the Association Agreement with the European Union, spoke at the National Endowment for Democracy. He said the biggest challenge to Ukraine’s future was not the war in eastern Ukraine but corruption, and Ukrainians will have to recognize and face that challenge – the sooner, the better. Mr. Nayyem, who later in the year was elected to the Verkhovna Rada, also had scheduled meetings at the International Republican Institute and the National Democratic Institute, the State Department, the U.S. Agency for International Development and at the Helsinki Commission, as well as with staff members of congressional committees on foreign affairs.