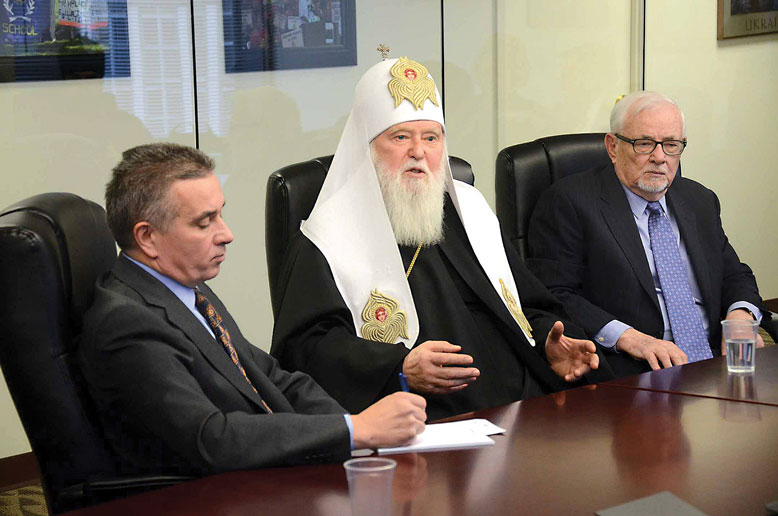 USUF
Ukrainian Orthodox Patriarch Filaret shares his views on current developments in Ukraine during a discussion session at the U.S.-Ukraine Foundation in Washington on February 6. Seated next to him are Ihor Gawdiak of the Ukrainian American Coordinating Council (right) and interpreter Peter Voitsekhovsky (left).

Ukrainian Churches faced new challenges during 2014, but new hope too, in the face of Moscow-orchestrated aggression toward the Ukrainian Orthodox Church – Kyiv Patriarchate (UOC-KP) and the Ukrainian Greek-Catholic Church (UGCC).

Patriarch Sviatoslav of the UGCC told reporters on January 13 of a letter from Ukraine’s Ministry of Culture on the termination of its registration based on its involvement in the Euro-Maidan protests. The ministry said the UGCC had violated the law on freedom of conscience and religious organizations for holding religious activities on Independence Square. Patriarch Sviatoslav said that the Church was not taking part in political events, but that it could “not stay apart when the faithful ask for spiritual care.”

Patriarch Filaret of the UOC-KP on January 21 called on President Viktor Yanukovych and the opposition to start direct talks. “…The Church calls on the head of state and the opposition to immediately start direct and, most importantly, fruitful negotiations to achieve a way out of the crisis.”  The patriarch reminded both sides of their responsibility for the use of force.

Patriarch Sviatoslav and Patriarch Filaret were among 20 representatives of Ukraine that attended the National Prayer Breakfast in Washington on February 6. More than 3,000 joined President Barack Obama for the event. The two Ukrainian Church leaders met with members of Congress, organizations and U.S. government officials to express their concern with the downturn of events in Ukraine under President Yanukovych and the need to support Ukraine’s Euro-Maidan movement. Patriarch Sviatoslav stressed the need for unity among the Ukrainian Churches during the crisis.

The UOC-Moscow Patriarchate (UOC-MP) voted on February 24 at its Synod to elect Metropolitan Onufriy (Berezovsky), titular bishop of Chernivtsi and Bukovyna, to the post of locum tenens of the UOC-MP. The new head of the Church replaced ailing Metropolitan Volodymyr (Sabodan). During a prayer service on Independence Square on February 22, leaders of most of the Churches of Ukraine were present, except the UOC-MP, which was represented by an archpriest. During the Synod, which condemned the Ukrainian government’s use of force against protesters in Kyiv, the attending clergy promoted unity among the Orthodox Churches of Ukraine, including the UOC-KP and the Ukrainian Autocephalous Orthodox Church.

An online documentary on the life of Cardinal Lubomyr Husar had launched its fund-raising project, with filming set to being in April. At the time, they had collected $2,310. Filming locations included Italy, Ukraine, Germany, North America and Austria. The film was released on August 24, 2014, with the online documentary including more in-depth material.

The UOC-KP launched “Support the Ukrainian Army” initiative on March 15 with an opening donation of $50,000 to Ukraine’s Ministry of Defense. Patriarch Filaret said that among the military units are priests and bishops who are trying to “lift up the mood and spirit of the military.”

The UOC-KP faithful in Crimea – estimated to number 220,000 – had been served by 15 priests in 20 churches. Many of the priests and faithful had fled the peninsula prior to the Russian annexation because the Church had not conformed with Russian laws.  UOC-MP priests, accompanied by Russian soldiers, would force UOC-KP Churches to close or take them over. Crimean Tatars, who are also under threat from the Moscow authorities, offered that the UOC-KP could hold services in their mosques.

Patriarch Sviatoslav enthroned Bishop Vasyl Ivasiuk, former exarch of Odesa-Crimea, as the new eparch of Kolomyia-Chernivtsi on March 22 in Kolomyia, Ivano-Frankivsk Oblast. Services were held at the Cathedral of the Presentation of Christ.

Pope Francis approved the creation of a new exarchate in Kharkiv for the UGCC, as announced by the Vatican on April 2. Previously the Kharkiv, Sumy and Poltava regions were under the Donetsk Exarchate, which includes Donetsk, Zaporizhzhia, Dniropetrovsk and Luhansk. Bishop Vasyl Tuchapets was appointed as exarch of Kharkiv. Bishop Stepan Menyok is exarch of Donetsk. The Vatican also approved on May 12 the creation of a UGCC Metropolitanate in Brazil, with the seat in Curitiba and the elevation of the Eparchy of St. John the Baptist in Brazil to an archeparchy. Bishop Volymyr Kovbych was named the first archbishop-metropolitan. Pope Francis’s announcement also included the creation of the Eparchy of the Immaculate Conception in Prudentopolis, with Bishop Myron Mazur as its head.

Patriarch Sviatoslav blessed the largest bell of the Patriarchal Cathedral of the Resurrection of Christ in Kyiv on April 7, on the feast of the Annunciation of the Virgin Mary. The bell, which weighs nearly four tons, bears the name of the Archangel Michael. The bell was made by the Royal Dutch belfry thanks to donations from around the world.

The annual St. Thomas Sunday Pilgrimage known as Providna Nedillia attracted thousands to the Metropolia Center of the Ukrainian Orthodox Church of the U.S.A. (UOC-U.S.A.) in South Bound Brook, N.J., on April 26-27. During an outdoor prayer service following Sunday’s divine liturgy, Metropolitan  Antony and Bishop Daniel led prayers at the Memorial Cross in St. Andrew Cemetery for the repose of the victims of Chornobyl, those who lost their lives during the Euro-Maidan protests, those killed in the Holodomor of 1932-1933, as well as all who served in the armed forces of Ukraine and the U.S.A.

The death on July 5 of Metropolitan Volodymyr of the UOC-MP at the age of 78 was seen as a failure of Moscow Patriarch Kirill in Ukraine.  The passing of the longtime head of the UOC-MP since 1992, who twice was almost elected Patriarch of Russia, was seen as the death of Moscow’s influence in Ukraine and across the post-Soviet space. President Poroshenko commented during the memorial service in Kyiv, “Ukraine has lost a great Ukrainian citizen.”

Patriarch Filaret commented on August 4 that the Russian Orthodox Church (ROC) was helping the terrorists in Donbas. The patriarch stated: “We are not the aggressors, we have not attacked Moscow and Russia, and Russia sent its weapons to Ukraine, Russia invaded our land – Crimea, although Russia was a guarantor of the inviolability of Ukrainian territory… But the truth is on our side, and God is with us.”

The Rev. Dr. Ivan Kaszczak released a book titled “Metropolitan Andrei Sheptytsky and the Establishment of the Ukrainian Catholic Church in the United States” in late 2013, and its release was noted in 2014 in a book note published on August 31. The book chronicles the development of the Church from its beginnings in North America, later under the leadership of Bishop Soter Stephen Ortynsky, concluding with the Church under Bishops Constantine Bohachevsky and Basil Tkach. It was originally written as a masters’ degree thesis when the Rev. Kaszczak was studying at Oblate College in Washington.

Bishop Daniel of the UOC-U.S.A., with the help of Metropolitan Makariy of the Lviv Archdiocese of the Ukrainian Autocephalous Orthodox Church, visited the Military Medical Clinic Center of the Western Region in Lviv in August. During his visit, the bishop met with Col. Ivan Hayda, director of the facility and one of the chief physicians. The center had 400 wounded soldiers at the time, but was in need of modern medical equipment. An initiative by the UOC-U.S.A. with support from the U.S. community had raised $100,000 to aid Ukrainian refugees and wounded soldiers, and to assist families of fallen heroes of the Maidan.

The UGCC, during its Synod on Briukhovychi, near Lviv, on September 7-14, released a statement calling the world’s attention to the crisis in Ukraine. Russian intimidation and military force, the Kremlin propaganda machine, the shock after the downing of Malaysia Flight 17 was more evidence of Russian tactics. “Stop the bloodshed in Ukraine!” the statement appealed. The statement continued: “Today, silence or inaction, reluctance to recognize the gravity of the situation that has arisen in our country cannot only turn everyone into a mute or indifferent witness, but also into an accomplice of the sin of murder which cries to heaven for justice as the Scripture says: ‘What have you done? The voice of your brother’s blood is crying to me from the ground’ (Genesis 4:10).”

The Ukrainian Catholic University (UCU) and the Ukrainian Catholic Education Foundation (UCEF) launched the $65.5 million Comprehensive Campaign to complete the university’s campus in Stryisky Park in Lviv. Fund-raising for “A New Generation for a  New Ukraine” began its efforts on November 1 in Toronto, followed by stops in New York, Cleveland, Montreal, Chicago, Calgary, London and Kyiv. The initiative had already collected 70 percent of the target amount at more than $45 million. The UCU was able to complete its new Multi-Purpose Academic Building and a state-of-the-art residential college (Collegium) with new housing, a dining hall, faculty offices and lecture halls for students, faculty and resident advisers.

St. John the Baptist Ukrainian Catholic Church in Fall River, Mass., celebrated the parish’s centennial on October 5 with a divine liturgy celebrated by Bishop Chomnycky. A celebratory banquet was held at nearby Magoni’s Restaurant. Founded by Ukrainians from the Austro-Hungarian region of Ukraine, the parish has continued to function even as parishioner numbers have fallen.