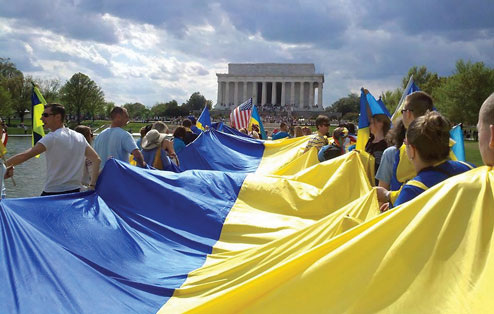 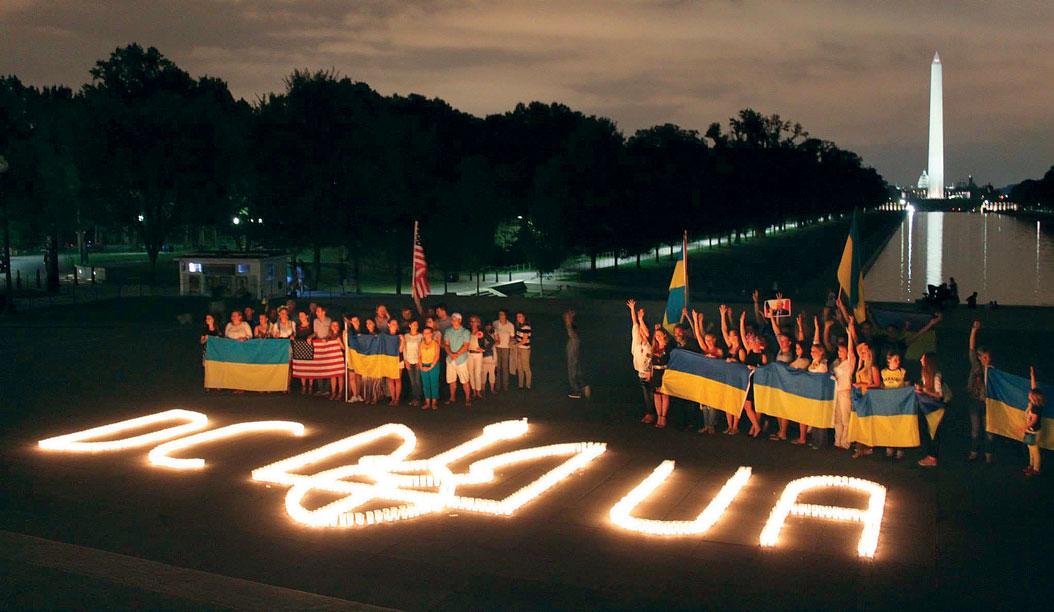 On May 26, the UCCA released its preliminary observations, stating, “the May 25 elections met international standards for free and fair elections and accurately reflect the will of the Ukrainian electorate.” Despite minor infractions in a few instances, the “voting process was conducted in a peaceful and transparent and democratic manner.” UCCA election observers were deployed to 600 polling stations across the Cherkasy, Dnipropetrovsk, Ivano-Frankivsk, Kharkiv, Kherson, Kyiv, Lviv, Mykolaiv, Odesa, Poltava, Sumy, Zakarpattia, Zaporizhia and Zhytomyr oblasts, as well as at Ukraine’s diplomatic posts in the U.S.

In the east of Ukraine, the UCCA statement condemned the Soviet-style methods used by Russian-backed militants, but applauded the efforts of residents of Donetsk and Luhansk oblasts, as well as the thousands of Crimean residents, including Crimean Tatars, who cast ballots in the presidential election. The efforts of the CEC and the Ukrainian government to ensure that the elections took place were noted.

Ms. Olexy recalled her experience as an election observer and as co-chair of the IEOM for UCCA. With Independence Square still scarred by the remnants of the Euro-Maidan events and the images of the fallen heroes of Ukraine as a backdrop for an election, this time was different, she said. The potential for trouble was everywhere and it was real, but so was the potential for change in a country that had enough of the status quo. However, Ukrainians held the presidential elections in a peaceful and democratic manner in the face of Russian aggression – and determined a president in the first round. Ms. Olexy cited the work of the CEC, the government of Ukraine and the election observers who worked to ensure the triumph of democracy.

Detroit-area Ukrainians met with Sen. Debbie Stabenow (D-Mich.) on March 18 at her Detroit office to discuss the situation in Ukraine. Sen. Stabenow listened to the community’s concerns and recommendations for a plan of action by the U.S. government. On March 9, Ukrainians of New Haven met with Rep. DeLauro at St. Michael Ukrainian Catholic Church, and urged the congresswoman to support tougher sanctions against the Russian government and its leading oligarchs who support Russian aggression in Ukraine.

The Ukrainian American Bar Association (UABA) released a statement on April 9 urging immediate military assistance to Ukraine by the U.S. and NATO allies. Items that were recommended for shipment to Ukraine included anti-tank and anti-aircraft equipment, border control equipment, communications gear, mine-clearing equipment vehicles, ammunition, fuel and medical gear. “Shame on the U.S. for being fooled once, by believing that Russia did not have designs on Crimea,” and “we should not allow Russia to fool us again with respect to its subordination or invasion of the rest of Ukraine.” In the volatile climate of international terrorism, the UABA underscored that the U.S. cannot appear to be weak, even temporarily, as Russian aggression threatens U.S. national security and the lack of response threatens U.S. credibility.

Sen. Benjamin Cardin (D-Md.), chairman of the U.S. Helsinki Commission and a senior member of the Senate Foreign Relations Committee, met with Ukrainian Americans from Maryland on April 14 in Washington to discuss the situation in Ukraine. Community members called for continued humanitarian support, tougher sanctions against the Russian aggressor and its oligarchs, the need for energy diversification in Ukraine, as well as military support for Ukraine’s defensive capabilities. The senator said he supported non-lethal assistance for Ukraine’s military and focused on ensuring the transparency and fairness of the upcoming presidential election on May 25.

The Shevchenko Scientific Society in New York hosted a Razom roundtable on April 5 to discuss the role of Ukrainians beyond the borders of Ukraine during the crisis. Razom was formed just a few months prior, at the end of 2013, after its president, Lyuba Shipovich, and future members had met at protests across the East Coast. The organization has grown to include a global network of volunteers engaged in fund-raising, media campaigning, investigating corrupt activities, as well as working with government representatives and human rights organizations.

On April 15 Rep. Chris Gibson (R-N.Y.) met with constituents at Holy Trinity Ukrainian Catholic Church in Kerhonkson, N.Y. More than 50 members of the community discussed the situation in Ukraine and how the U.S. can deter Russian aggression with sanctions and military aid. Concerns were also voiced for the persecution of the Catholic faith in Crimea and eastern Ukraine by Russia.

Ukrainians converged in solidarity on May 3 at the White House in Washington for the “World united in support of Ukraine” rally. Speakers included journalist Myroslava Gongadze, George Pazuniak of the UABA, Dr. Christine Hoshovsky of the Rochester Ukrainian Group, Orest Deychakiwsky of the U.S. Commission on Organization on Security and Cooperation in Europe. The rally continued with a march to the Lincoln Memorial, where participants formed a human “Chain of Unity.” Out of this event, the coordinators formed an NGO called Ukraine Abroad to serve the Ukrainian American community and to promote a free and united Ukraine.

Ukraine’s Embassy in the U.S. hosted a roundtable meeting on how to help Ukraine on June 16 in Washington. Ambassador Olexander Motsyk stressed the need for: 1) getting political, financial, military, expert and humanitarian assistance; 2) initiating sanctions to stop Russian aggression; 3) promoting international cooperation in the area of trade and investment; and 4) helping to bring about reform in Ukraine’s social-economic sectors and its integration into Europe with the help of international organizations. UNIS Director Michael Sawkiw Jr. stressed the need to be precise and to prioritize, with military aid and defense programs. Nadia Diuk of the National Endowment for Democracy highlighted the need to identify short- and long-term goals. Many of these ideas, added Ms. Olexy of the UCCA, could be used in the approaching Ukrainian Days advocacy event in Washington that was held on July 16.

Sen. Menendez met with Ukrainian pop star and Euro-Maidan stalwart Ruslana at his Newark office to recognize her work during the protests in Kyiv and to confer with New Jersey Ukrainian Americans in learning more about the community’s concerns. In attendance were Walter Zarycky of the Center for U.S.-Ukraine Relations, Roma Lisovich, treasurer of the UNA; Yuriy Symczyk, UNA fraternal coordinator; Ms. Olexy, president of UCCA; and Michael Koziupa of Selfreliance Ukrainian American Federal Credit Union in Whippany, N.J. The representatives argued for greater humanitarian assistance, as well as military aid for Ukraine. Sen. Menendez explained the difficulties these efforts are meeting in Washington.

Following the downing of Malaysia Airlines Flight 17 by Russian-backed militants in eastern Ukraine, protests erupted in reaction to the disaster that claimed 298 lives. On July 17 Prof. Serhii Plokhii of Harvard University spoke as a guest on the WBZ Radio program with Dan Rea. Dr. Plokhii stated: “It is clear that the Malaysian plane was shot down by a Buk missile released by pro-Russia terrorists in eastern Ukraine, and that there were at least three Russian advisors with them. Ukrainian President Petro Poroshenko has said that he has the names of the three and he would not do so if he was not sure of his information.” The following day, on July 18, the community gathered on Boston Common for a two-hour long silent candlelight vigil to mourn the victims. On July 20, the Boston branch of the UCCA requested requiem services to be held across Massachusetts and Rhode Island for the MH17 victims and for all victims of the latest Russian aggression in Ukraine.

In Pittsburgh, Prof. Adriana Helbig on July 21 declared a week-long hunger strike to call attention to the events in Ukraine. In Philadelphia on July 18, Ukrainians took to the streets with Ukrainian flags and placards as they demonstrated on Benjamin Franklin Parkway. While in Washington, Ukrainian Americans gathered at the Embassy of the Netherlands to offer solidarity on July 18 with flowers, candles and cards left at the Embassy. One card by “Iryna” simply stated, “Ukraine mourns with Holland.”

In an effort to secure more defensive aid for Ukraine, co-chairs of the Congressional Ukrainian Caucus, Reps. Jim Gerlach (R-Pa.), Sander Levin (D-Mich.) and Marcy Kaptur (D-Ohio), introduced H.R. 5190, the Ukraine Security Assistance Act, on July 24. The bill authorized the president to assess Ukraine’s military, intelligence and security needs, and provide adequate and necessary assistance in protect Ukrainian democracy and sovereignty. The legislation was supported by the UCCA, the U.S.-Ukraine Business Council and the Ukrainian Federation of America. Mr. Sawkiw, director of UNIS, added, “Furthermore, the UCCA urges the United States to impose harsher sectoral sanctions on Russia, and for President Barack Obama, as leader of the democratic free world, to utilize all of his effforts to persuade the leadership of Europe to match U.S. resolve.”

The UCCA urged Ukrainians in the U.S. to press the U.S. government to grant Ukraine Major Non-NATO Ally (MNNA) status during its efforts to support Ukraine in its conflict with Russia. President Petro Poroshenko made the request for MNNA status while speaking live on CNN on July 21. The military and financial advantages of Ukraine be granted MNNA status would expedite the lease of military equipment through U.S. funding, anti-terrorism cooperation, exemption from the U.S. Arms Export Control Act, the purchase of depleted uranium anti-tank munitions, priority deliver of military equipment and supplies, the basing of Department of Defense reserve stockpiles, cooperative research with the DOD, bidding on certain DOD contracts, as well as reciprocal training. The MNNA status (which 15 countries currently have) does not entail a security commitment from the U.S. or NATO, but is a means by which the U.S. can assist Ukraine to defend itself.