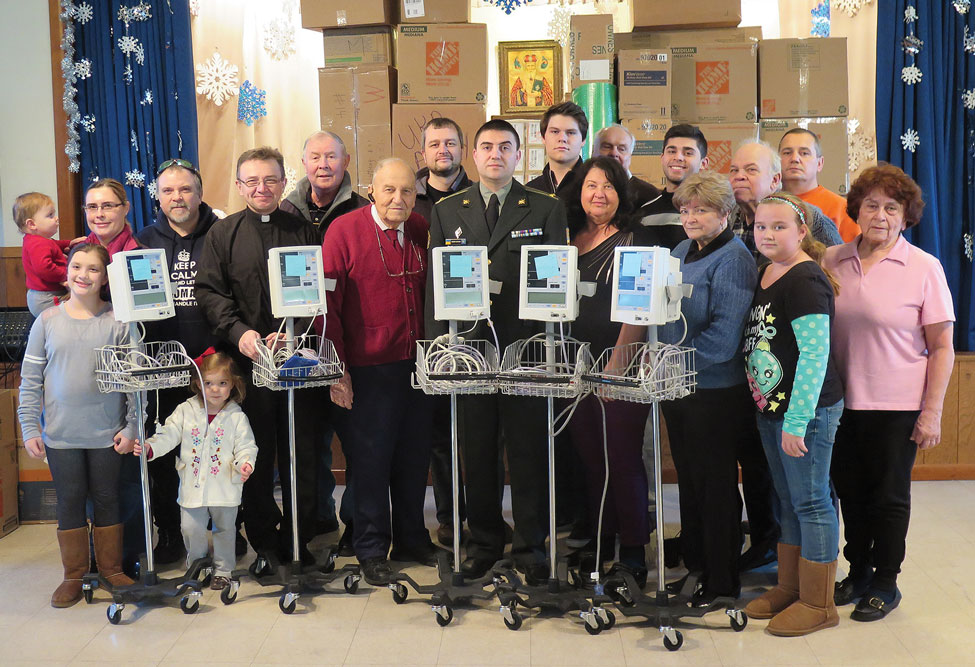 Roman Karpishka Jr.
Local volunteers with Lt.-Col. Ihor Dzera of the Ukrainian armed forces (center), who said he is most thankful for the assistance his close military colleagues will receive from the diaspora. These volunteers, and others, sent 50 boxes of medical and humanitarian aid to Ukrainian soldiers in the Donbas.

ALBANY, N.Y. – The Ukrainian community of the greater Albany area – Watervliet, Cohoes, Amsterdam and Troy, N.Y. – gathered winter clothing and medical supplies for Ukraine’s soldiers. Over 50 boxes were prepared, labeled and packed by volunteers from five parishes for air transport from New York City to Kyiv.

They were sent to the military hospital in Kyiv, as well as to the eastern regions of Ukraine, where patriotic forces are bravely withstanding warfare on a daily basis. The shipment was expected to be delivered by January 7 (Julian calendar Christmas) and in time for the year’s coldest months.

Ukrainians of the Albany area said they would like to encourage other communities to send humanitarian and medical assistance in the coming days to equal or surpass the contributions of their small community of under 3,000 people.

Community members also expressed special thanks to Dr. Andrij Baran of Saratoga, N.Y., president of the greater Albany branch of the Ukrainian Congress Committee of America, for obtaining massive supplies of needed medical equipment for the front in eastern Ukraine. They also thanked Meest for providing transport to New York City and Ukraine International Airlines for transport from New York to Kyiv.