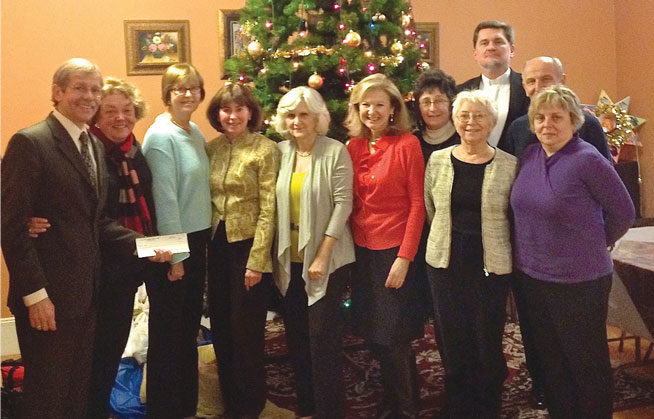 BOSTON – The Friends of the Ukrainian Catholic University (UCU) Boston Branch began the new year with a planning meeting on January 4 to formulate goals and to develop a series of fund-raising events in support of its current project to raise $100,000 to endow a lectureship in UCU’s Business School’s new Good Governance Program.

They also turned over a check for $3,000 that had been given by a parishioner of Christ the King Ukrainian Catholic Church for the program to Alex Kuzma, chief development officer of the Ukrainian Catholic Educational Foundation, who had come to Boston to attend the meeting, participate in the planning and give an overview of the international fund-raising accomplishments for UCU in 2014.

The group has been very active in its support of the Ukrainian Catholic University in Lviv and raised more than $75,000 for a room in the new administration building, which was officially dedicated as the Boston Seminar Room last year.

The Good Governance Program was developed in response to last winter’s Revolution of Dignity with its demand to an end to systemic corruption in all levels of government and its calls for the introduction of transparency. Its statement of purpose says: “A new country needs leaders of quality. As a result a program with an innovative approach to government administration ‘good governance’ was carefully crafted to prepare a new type of manager, one who understands and knows how to introduce needed changes during crisis conditions while practicing ethical principles and values with the ultimate goal of the good of society.”

One of the main strategic goals of the program is the formation of a community of graduates with the appropriate knowledge and worldview throughout the country who can support each other and make changes in society that are really noticeable and effective.

Commenting on the program Sophia Opatska, dean of UCU’s Lviv Business School, said, “Good governance as an attitude and practice is extremely important for reform and positive change in Ukraine. The Revolution of Dignity reawakened impulses in Ukrainian society toward participatory democracy, respect for human dignity, as well as personal responsibility for the future of the society and the country. That is why the university has developed this program for public servants: to help them understand their role and mission; to develop their skills and professionalism; and to build a nationwide network of moral, ethical government administrators working for the good of the people of Ukraine.”

Among the fund-raising events that Friends of UCU-Boston has planned for 2015 are a lecture by the Rev. Yuri Avakumov, professor of theology at Notre Dame University and noted specialist in studies of Metropolitan Andrey Sheptytsky; a “Pops” style concert on the grounds of Christ the King Ukrainian Catholic Parish; and a tour to Ukraine visiting Lviv and UCU, as well as Chernivtsi and both the Ukrainian and Romanian portions of Bukovyna.

Donations for the “Good Governance” lectureship can be forwarded to Friends of UCU, c/o Christ the King Ukrainian Catholic Church Rectory, 146 Forest Hills St., Jamaica Plain, MA 02130. The notation “Good Governance” should be made in the memo portion of the check.