Documents reveal information on Ukrainian heroes of the French Resistance 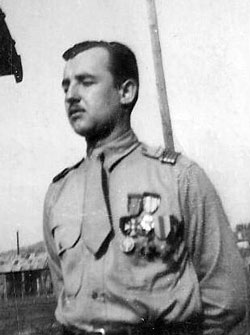 TORONTO – Former Hamilton Spectator photographer Leon Hloba, 88, died in Dundas, Ontario, back on December 31, 2012. When his surviving sister Zhenia Maslany opened his safety deposit box, she found documents that confirmed some of the stories about her brother during World War II. He had not talked about that time, but the documents prove that he led a group of Ukrainian soldiers to mutiny against their German overseers and then to become part of the French Resistance.

Ms. Maslany, with her niece Nadia Klein, brought the documents to the Ukrainian Canadian Research and Documentation Center (UCRDC) – whose archives hold a lot of material relating to Ukrainians in the second world war – on November 20, 2013, so that their significance could be deciphered.

The story began in 1942, in German-occupied Ukraine. The Germans formed guard units from the local population to protect military and transportation sites from Soviet partisans. But by 1944, when the German army was facing a manpower shortage, the units were redesigned as self-defense battalions and reorganized into the 30th Waffen Grenadier Division of the SS – a German infantry division. This division was formed largely from Belarusian, Russian and Ukrainian personnel. Although all key command positions were occupied by Germans, two battalions were headed by Ukrainians. Maj. Leon Hloba became the nominal commander of the 102nd Battalion and Capt. Negrebetzki headed the 118th Battalion.

By mid-August 1944, the U.S. 3rd Army was advancing eastward in France, and the division was moved from Ukraine by rail to southeastern France to ease the way of the Germans by dealing with French partisans – Forces Françaises de l’Intérieur (FFI).

Deployment to France placed the Ukrainians in a dilemma. Although they were prepared to fight Soviet forces, they did not want to engage with Western Allies. Both Ukrainian commanders decided to mutiny and take their battalions over to the Western Allies. They made contact with the FFI and agreed that they would come over to the French side. On August 27, catching the Germans totally by surprise, the Ukrainians of the 102nd Battalion shot their German officers – 24 mounted officers and 70 NCOs. In the 118th Battalion, 24 German officers and NCOs were similarly wiped out. 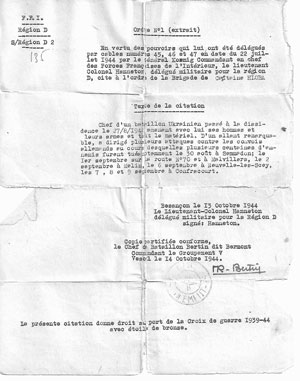 When the London headquarters of the U.S. Office of Strategic Services (OSS) received word that a large force of “Russians” had mutinied in eastern France and was now fighting with the FFI, they parachuted a team – codenamed Marcel-Proust – to assess the situation. It was commanded by Lt. Col. Waller B. Booth, who would later write the book “Mission Marcel-Proust” (1972) about Allied cooperation with the French Resistance. The book included information about the Ukrainian mutiny and the role of Maj. Hloba.

On September 14, 1944, the 1st French Army, with the help of 1st BUK, linked up with Gen. George Patton’s forces. Hloba and two of his platoon commanders were decorated with the Croix de Guerre.

Although by the end of September 1944 combat operations in eastern France were effectively over, the fate of the Ukrainians was uncertain because, according to the Yalta Agreement, they were subject to repatriation to the USSR. It was the help of the French, who enrolled the entire battalion into the French Foreign Legion, and the intervention of Col. Booth, who vouched for the Ukrainians’ help in the Allied cause, that saved them from repatriation.

The documents that the family brought to the UCRDC, included copies of 11 instructions to the Ukrainian battalions from the FFI; confirmation of the awarding of the Croix de Guerre to Maj. Hloba and two of his platoon commanders. There were four letters from Booth to Hloba concerning Hloba’s character and service to the Allied cause, as well as seven documents of the International Refugee Organization dealing with the processing of Hloba’s immigration to Canada in 1951.

The documents were scanned by the UCRDC and are now available to anyone wanting to research the topic of Ukrainians in France in World War II.

Background information on the Ukrainian battalions in France is taken from Ronald B. Sorobey’s “Ukrainians Fight for France” (available on http://forum.ottawa-litopys.org/france/sorobey.htm) and Waller B. Booth’s book “Mission Marcel-Proust” (1972).