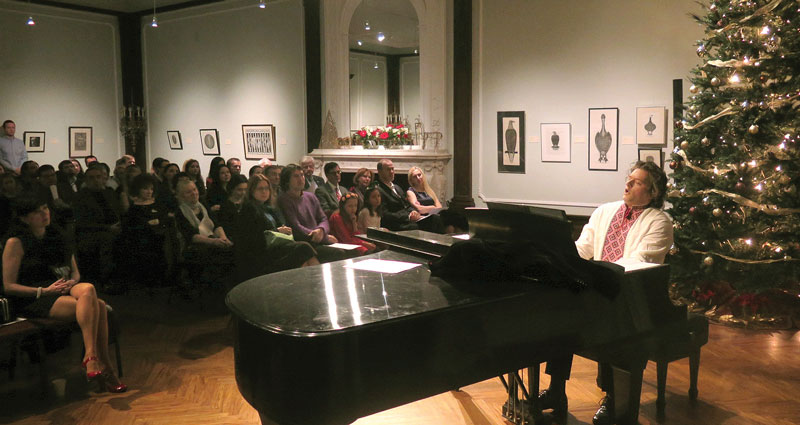 Marco Shmerykowsky
Pianist and tenor singer Taras Chmil performs at the Yalynka Christmas celebration that was held at theUkrainian Institute of America.

The event, which has become known as “the best Christmas party in New York City” attracted more than 300 guests to the festivities on December 13, 2014.

Brief introductions and words of welcome were delivered by Ivan Durbak, UESA’s New York Chapter program director, who introduced the evening’s performer, tenor Taras Chmil. An accomplished pianist and singer, Mr. Chmil has sung with the Toronto City Opera (2009) and since 2008 he has been working with the Canadian Opera Company Chorus. In 2015, Mr. Chmil is set to compete in the New Jersey Association of Versimo Opera finals (February) and is scheduled to sing as Cavaradossi in Chelsea Opera’s “Tosca” (May).

Following Mr. Chmil’s performance, Mr. Durbak introduced Lada Rosylsky of the Ukrainian Freedom Fund (UFF), an NGO that has raised more than $333,000 and has delivered first aid, medial and protective material in the defense of Ukraine against Kremlin-backed militants. The UFF (http:///ukrfreedomfund.org) is registered in Kyiv as an official NGO and is endorsed by the National Security and Defense Council of Ukraine, the U.S.-Ukraine Business Council and the EU-Ukraine Business Council.

Wasyl Krawec of Yonkers Miasarnia, who for many years has offered his excellent and varied menu for various UESA New York events, supplied the Yalynka with tasty selections.

As the night continued, the Ukrainian Institute of America continued to fill as professionals, young and old, arrived with their family and friends. New friendships and connections were made and old ones were reinvigorated.

As always, the die-hard Yalynka attendees had such a good time that it was nearly impossible to convince them that this year’s event had to come to an end. On the bright side, however, the next UESA/UMANA event is never too far away.