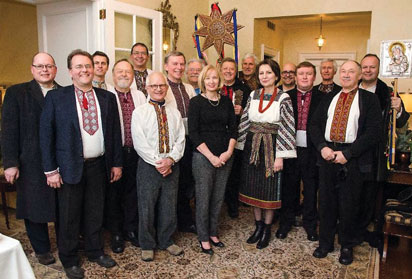 UCC
Ukrainian Canadian carolers at the residence of the prime minister of Canada. Seen in the center is Prime Minister Stephen Harper’s wife, Laureen Harper.

At the beginning of the Ukrainian Christmas season (January 7 to 19, according to the Julian calendar), a group of carolers composed of members of Ottawa’s Akord Ukrainian Men’s choir performed a series of carols in Ukrainian.

Weathering bone-chilling weather in Ottawa, the carolers arrived at 24 Sussex at 6 p.m. They greeted Laureen Harper with the traditional Ukrainian Christmas greeting, “Khrystos Narodyvsia,” and then asked “Do you welcome carolers?” Mrs. Harper invited the group into her home and the carolers sang “Dobryi Vechir Tobi.” The carolers then performed “Po Vsiomu Svitu Stala Novуna” (Throughout the World, a New Event).

This was followed by a traditional Ukrainian Christmas greeting, a “vinshuvannia,” recited in English by Michael Reshitnyk.

The caroling was organized by the National Office of the Ukrainian Canadian Congress.