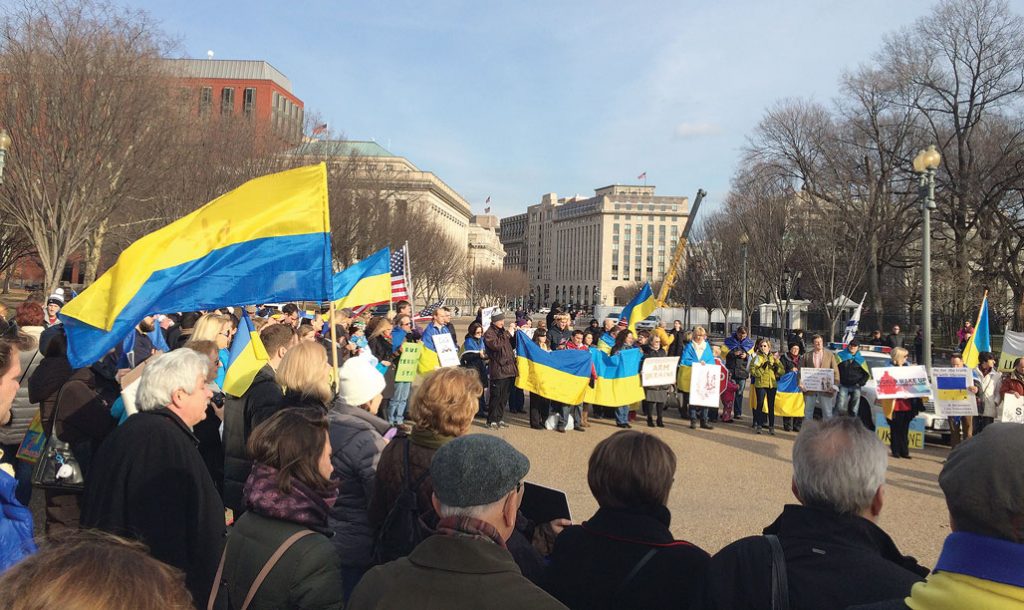 Paul Hadzewycz
With American and Ukrainian flags and anti-Putin placards in hand, Ukrainian demonstrators gather in front of the White House on January 25.

WASHINGTON – Hundreds of Ukrainian Americans came together at three events here to honor Ukraine’s historic struggle for its unity and independence, and to express their support for Ukraine’s current fight against Russia’s attempt to undermine it again.

The series of gatherings began on Friday, January 23, when the Embassy of Ukraine hosted an evening reception honoring Ukraine’s historic 1919 “Day of Unity.” It was followed by two demonstrations: in front of the White House on Sunday afternoon, January 25, in support of Ukraine’s current fight against Russian aggression, and on Monday, January 26, in front of the Russian Embassy, demanding the release of Nadiya Savchenko, the Ukrainian military pilot imprisoned in Russia who has been on a hunger strike since mid-December.

In his remarks at the Day of Unity reception at the embassy, Ambassador Alexander Motsyk noted that the January 22, 1919, signing of the “Akt Sobornosty,” which for the first time united the eastern and western parts of Ukraine into one country, was the realization of a centuries-old dream of the Ukrainian people. Unfortunately it didn’t last long, he added, and Russia brought eastern Ukraine back under its control.

And now, he said, two decades after the fall of the Soviet Union in 1991, when Ukraine regained its independence, it is once again the subject of Russian aggression, with Moscow’s annexation of Crimea and participation in the separatist fighting in Ukraine’s eastern regions.

Russian President Vladimir Putin does not want to see a united, democratic Ukraine, Ambassador Mostyk said. He wants it to be a part of a new Russian empire.

The ambassador said he was certain that even though the process will be difficult, with the assistance of the United States and the European Union, Ukraine will overcome this aggression, and he expressed Ukraine’s gratitude to these countries and international organizations and institutions for their assistance. He said the United States was a leader in this effort.

On a surprisingly warm and sunny Sunday afternoon, more than 100 Ukrainian demonstrators gathered in front of the White House, carrying Ukrainian and American flags and placards protesting Russian aggression in Ukraine, demanding the release of Lt. Savchenko and calling on President Barack Obama (who was away visiting to India) to implement the Ukraine Freedom Support Act passed by Congress by providing Ukraine with lethal military aid and placing stronger sanctions on Russia.

These demands were expressed in remarks by leaders of Razom and other Ukrainian organizations participating in the demonstration and repeatedly chanted by those attending the event. Among the slogans chanted were: “Arm Ukraine, save the world,” “Arm Ukraine, stop terror,” “Fewer words, more action” and “Stop Putin now.”

The Monday afternoon protest in front of the Russian Embassy demanding the release of Lt. Savchenko was apparently affected by the strong winter storm warning for the region. A small group of about a dozen warmly dressed protesters marched for more than an hour in front of the Embassy’s main entrance on what was billed worldwide as Free Savchenko Day.