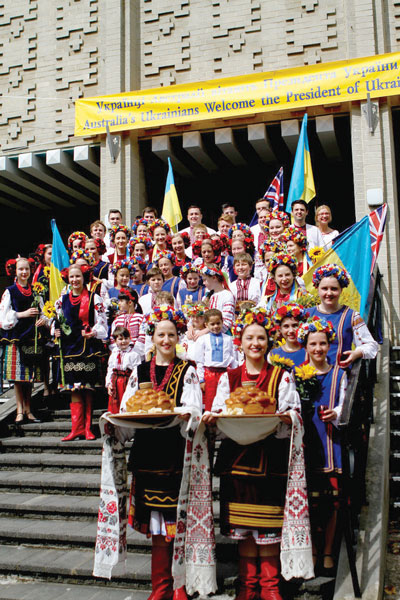 Diaspora Ukrainians around the globe mobilized in 2014 to support Ukraine in myriad ways – from protesting in front of government buildings, to sending medical supplies to Ukrainian troops and participating in roundtable discussions on the conflict in Ukraine. It was a busy year to be Ukrainian.

In early February, the Munich Security Conference took place with Ukrainian opposition leaders Vitali Klitschko and Arseniy Yatsenyuk in attendance and meeting with Western leaders. About 500 Ukrainians and their supporters from various cities in Germany gathered on February 1 in support of Ukraine’s Maidan movement at the Sendlinger Tor (Gate) in downtown Munich. This was one of many demonstrations held that winter across Ukrainian diaspora communities.

Later that month, on February 27, in honor of the 200th anniversary of Ukrainian poet Taras Shevchenko’s birth, the Ukrainian World Congress (UWC) and the World Federation of Ukrainian Women’s Organizations (WFUWO) presented a program to bring attention to Shevchenko’s efforts in defense of the Ukrainian language, as well as to champion human rights for Ukrainian people at the annual International Mother Language Day at the United Nations. One of the key organizers of the event, Dr. Martha Kebalo, explained, “While the reason for the recognition of Mother Language Day is close to our hearts, this is the first year Ukrainians [were]the organizers of such an event at the United Nations. We know that there is much interest in our program and that the U.N. Secretary General Ban Ki-moon is keenly aware of events in Ukraine, as is the United Nations press corps.” According to her, this event was a good opportunity to place the long history of the Ukrainian struggle for democracy and the dignity of the Ukrainian language in context. International Mother Language Day was established in 1999 to promote awareness of linguistic and cultural diversity and multiculturalism.

Also in 2014, Plast Ukrainian Scouting Organization proudly reported that it now has a new scout group in Sweden. Ukrainian immigrants in Sweden eagerly gathered to mark the first meeting of the group on April 12, where the young members took the Plast oath and received their scout neckerchiefs. The idea to bring together Ukrainians living in Stockholm came from Motria Jaremko, a Plast member from the United States, who is currently living in Sweden with her family.

The Ukrainian World Congress also had quite a busy year. On May 26, it released a statement on its preliminary observations of the presidential elections in Ukraine. It reported that international standards for conduct of democratic elections had been met. The UWC International Election Observation Mission’s 236 observers traveled to Ukraine from 22 countries. They monitored the vote in over 1,700 electoral precincts in 39 Ukrainian cities. The conclusions of the UWC mission were based upon direct observations by its short-term observers and meetings held with officials from state institutions, representatives of political parties, the media, civil society and the international community. According to the UWC report, although there were minor infractions and shortcomings, they did not impact the election results. The government of Ukraine made an effort to ensure that the May 25 elections would be transparent and conducted on the highest level, the UWC stated.

A few months later, the director of humanitarian missions at the UWC, Ulana Suprun, spent a week coordinating combat medical training at a Ukrainian fighter base in the Dnipropetrovsk Oblast as part of the Patriot Defence Program launched in early May. This initiative provides Ukrainian soldiers and fighters with improved First Aid Kits and Combat Lifesaver Training that the Ukrainian military didn’t provide. With the Ukrainian government practically bankrupt after the corruption of the administration of former President Viktor Yanukovych, Ukraine’s armed forces were in catastrophic shape and found themselves unprepared for a Russian military invasion in March. Soldiers lacked the basic necessities for fighting a war, such as night-vision scopes, bulletproof vests, helmets, tents, sleeping bags, shovels, flashlights, boots and even camouflage clothing. Other organizations, including the Organization for the Defense of Four Freedoms for Ukraine (ODFFU), the United Ukrainian American Relief Committee (UUARC) and many smaller groups, as well as individual donors also raised money for medical supplies for Ukraine.

In July, the Weekly featured a story about the inspiring Niepubliczna Szkola Podstawowa in Mokre, Poland, where students attending kindergarten through sixth grade receive curricular instruction in both Polish and Ukrainian. The heart and soul of this multicultural school is the Rev. Julian Felenczak, who hails from the village of Bortne in Gorlice County of the Lemko region. The school population consists of 30 Polish, 30 Ukrainian and 30 mixed Polish-Ukrainian students. Although the study of Ukrainian is optional, at least 50 percent of the students from Polish families elect to study it. The school is working to raise funds to maintain the school facilities and continue to cultivate multicultural education in southeast Poland.

Also noteworthy this summer was the WFUWO’s support of the United Nations campaign against human trafficking. In an effort to increase awareness of this issue, the United Nations designated July 30 as the first World Day against Trafficking in Persons, promoting the message of the Blue Heart Campaign International. The goal of this multi-year awareness campaign is to stop the trafficking of millions of women, men and children victims – a form of modern slavery – by encouraging people to take action to prevent this crime.

The WFUWO has been a partner of the Blue Heart Campaign since its inception in 2008. In promoting the Blue Heart Campaign, the WFUWO joined forces with Canadian Member of Parliament Joy Smith, the award-winning journalist Victor Malarek and Rachel Durschlag, the executive director of Chicago Alliance Against Sexual Exploitation. Human trafficking is a global problem, and in Ukraine it remains particularly acute. Despite significant efforts on the part of the Ukrainian government to eliminate human trafficking, according to a 2013 report produced by the research institute CARIM-East and financed by the European Union, Ukraine does not yet fully correspond to even minimum world standards in this field.

On July 10-12, the WFUWO’s annual meeting, held this time in Paris, was attended by 35 delegates and guests representing eight countries. WFUWO President Orysia Sushko presented a detailed report of the past year’s activities, which was accepted and received with enthusiasm. During the formal portion of the meeting, two new organizations submitted their intention to become members of the WFUWO and were approved: Ukrainians of the Netherlands and Ukraine Plus from Italy. As a result, the WFUWO now consists of 29 organizations from 18 countries. Established in 1948 in Philadelphia, the WFUWO represents a spectrum of women’s organizations pursuing civic, religious, cultural, educational, immigration and humanitarian goals.

Also in July, Dr. Sofia Fedyna, president of the World Federation of Ukrainian Lemko Unions (SFULO), held a lecture in Passaic, N.J., on “Ukraine after the Maidan” and “The Lemko Region in the Global Context.” Dr. Fedyna, an assistant professor of international relations and diplomatic service at Lviv’s Ivan Franko University, took an active part in the protests in Lviv. Her lecture, attended by approximately 100 people, was held within the framework of the new “Lemko Coffee Talk” series organized by the Organization for the Defense of Lemkivshchyna. Dr. Fedyna called on all Lemkos to come together during this critical time in Ukraine’s history. She told her audience, “Right now, the most important place from where our roots cannot be torn, is in our hearts. And around ourselves we can build up our culture and our traditions, while at the same time enriching each country where we live. In Canada and the United States, you know what is meant by the statement ‘we are rich in our diversity.’ ”

On August 24, Ukrainians worldwide celebrated and commemorated Ukrainian Independence Day – even in Hong Kong. A short new item submitted to The Weekly reported that about 30 people living or working in Hong Kong (many of whom are from Ukraine) celebrated the event with a Ukrainian shashlyk-inspired Hong Kong-style barbecue. The evening included singing and entertainment and a local fund-raising effort for supplies for the Ukrainian armed forces.

This fall, Russia’s role in the ongoing crisis in Ukraine took center stage in Brisbane Australia, at the summit of the Group of 20 (G-20), even though it was not a topic on the official agenda. On November 15-16, during the meeting of the world’s largest economies – 19 countries plus the European Union – Canada’s Prime Minister Harper was quoted by Canadian media as saying to Russian President Vladimir Putin, “Well, I guess I’ll shake your hand, but I only have one thing to say to you: you need to get out of Ukraine.”

Ukrainian Australians and their supporters, who held a “Protest Against Putin” at King George Square outside Brisbane City Hall on November 15, underlined this message. The president of the Australian Federation of Ukrainian Organizations, Stefan Romaniw, said, “We say to Putin: we democratic Australians are disgusted by your presence in Australia. We condemn your tyrant terrorism – be it your invasions of smaller countries, your responsibility for those who destroyed MH17 and took Australian lives, your provocative naval activity and your disregard for human rights.” In the aftermath of the summit in Brisbane, Mr. Romaniw called on G-20 leaders to match their strong anti-Putin rhetoric with strong anti-Putin action by providing military assistance for Ukraine’s self-defense. “Ukraine’s fight is the world’s fight – and the world needs to invest in defending itself from Putin’s neo-imperial ambitions and aggression,” Mr. Romaniw stated.

Also in November, the United Nations NGO Committee on the Status of Women (CSW) in Geneva hosted an NGO Forum that immediately preceded the United Nation’s Economic Commission of Europe (ECE) conference. Close to 700 representatives of 350 non-governmental organizations from 56 countries of the ECE region convened for the NGO Forum to assess the progress made in implementing the promises made to the women of the world in the Beijing Platform for Action 1995, as it nears its 20-year mark. Ukraine and many countries that are home to the Ukrainian diaspora are included in the region embraced by the ECE. The WFUWO was among the forum’s participants.

At the forum, 16 thematic roundtables were arranged to correspond to the Beijing Platform’s 12 critical areas of concern for women (Poverty; Education and Training; Health; Violence against Women; Women and Armed Conflict; Economy; Power and Decision-Making; Advancement of Women; Human Rights of Women; Women and the Media; Women and the Environment; The Girl Child). Participants in the roundtables from Ukraine and the Ukrainian diaspora included Natalia Karbowska of the Ukrainians Women’s Fund in Kyiv and Kateryna Levchenko of La Strada-Ukraine, who spoke about women in power and decision-making, and women in armed conflict. Oleksandra Kunovska Mondoux, the WFUWO’s main representative to the U.N. in Geneva, addressed the topic of women and the media. At the conclusion of the meeting, the Geneva NGO Forum on Beijing +20 UN ECE Review published its Declaration and Recommendations with the motto “Every Woman, Every Right, Every Minute: Everyone is Responsible and the Time is Now.”

A day later, Ukraine’s government delegation at the U.N. ECE Beijing +20 Regional Review included Minister of Social Policy Liudmyla Denisova. She spoke frankly during her presentation about the conflict in Ukraine, as well as the current Ukrainian government’s commitment to gender equality. She made a special point of describing Ukraine’s current challenges, especially as they relate to safeguarding women and children, many of whom are suffering from complex life circumstances in the conflict zones of the country’s southeast territories controlled by illegally armed groups. The dire situation in Ukraine evoked sympathetic references from the president of the NGO CSW Geneva, and the undersecretary general and executive director of U.N. Women, as well as overt support from the participants of the conference.

Finally, in mid-December, members of the Ukrainian community in Melbourne, Australia, welcomed Ukrainian President Petro Poroshenko and Australian Prime Minister Tony Abbott in their midst, and prayed for peace and unity in Ukraine during the president’s visit .