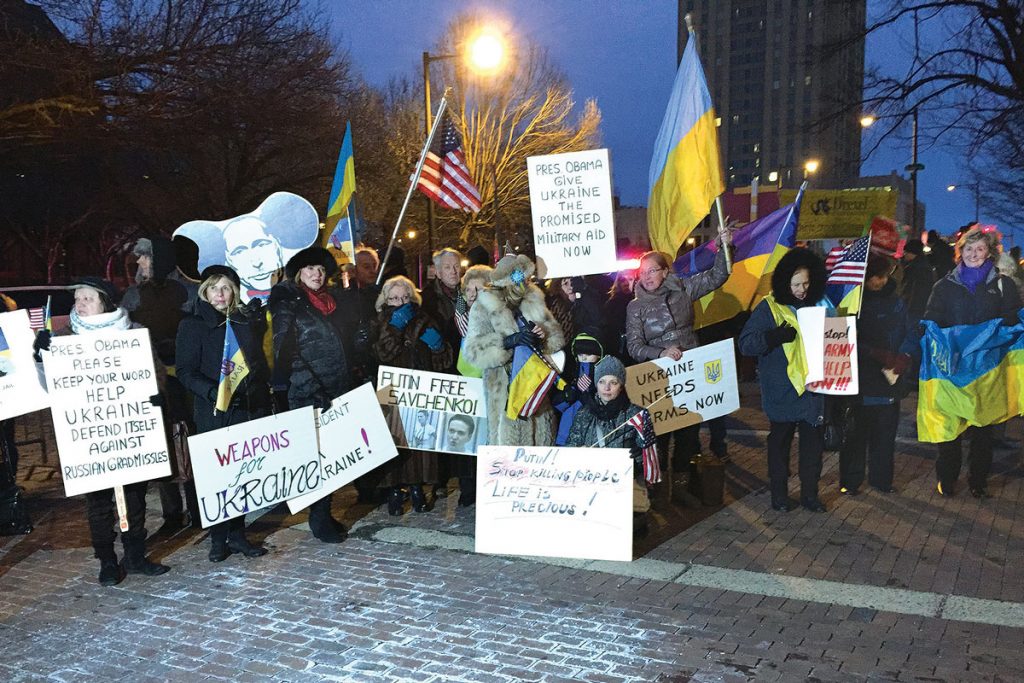 PHILADELPHIA – Seventy-five Ukrainian Americans rallied on Thursday, January 29, by the Society Hill Sheraton in Philadelphia to demand arms for Ukraine. The occasion for the demonstration was a visit by President Barack Obama, who had come to Philadelphia to attend a dinner of the Democratic Party leadership.

The demonstrators came armed with megaphones, Ukrainian blue-and-yellow flags and placards to voice their demands to President Obama. “President Obama Arm Ukraine,” “Arms for Ukraine,” “Free Savchenko” and “Stop Putin” were among the messages conveyed.

Standing from 5 p.m. to 7 p.m. in bone-chilling temperatures, the demonstrators chanted their demands for aid to Ukraine. The action was organized by the Ukrainian Human Rights Committee.

Marta Fedoriw, who said, “I drove almost two hours to take part in this demonstration because I believe that every little bit we can do to focus on Ukraine is important.”

Larrisa Kyj said, “I came to demand that President Obama act in his executive position and carry out the resolution passed by both the Senate and the House which provides for military aid for Ukraine.”

Among the demonstrators were a group of young professionals.

Nina Popel, a young Ukrainian American attorney, commented: “I continue to read the troubling reports coming out of Ukraine, so it was important for me to participate in the demonstration to express my support for the people of Ukraine, to show solidarity with their cause and to increase awareness about the situation in eastern Ukraine.”

“Wars are often impersonal,” said Bohdan Pechenyak, “But, this war became truly personal for me on October 19, 2014, when I learned that Victor Gurniak, a friend, a truly wonderful person, a creative positive individual was killed. Victor worked as a photo correspondent, and with his friends co-founded a photo agency, LUFA.” Expressing his reason for demonstrating, Mr. Pechenyak said,” I continue to be engaged as I am because of people like Victor Gurniak, because of Ukrainians who deserve to live a decent, dignified, free life in their own country, without violent aggression from outside.”

The youngest demonstrator 5-year-old Matvii, who was bundled up against the bitter cold and came with his grandparents Vera and Roman Andryczyk, clutched a small Ukrainian flag in one hand and a small American flag in the other. Matvii waved the flags and joined in the chanting with the participants of the demonstration.

The demonstration was carried live on the 6 p.m. news. The Philadelphia Inquirer in its cover story of President Obama’s visit to Philadelphia, wrote about the demonstration outside the hotel: “Ulana Mazurkevich, president of the organization Ukrainian Human Rights Committee, stood amid protesters waving blue-and-yellow Ukrainian flags and shouting ‘Arms for Ukraine’ into a megaphone. …He should authorize the Ukrainian Freedom Support Act, Mazurkevich said of the president.”