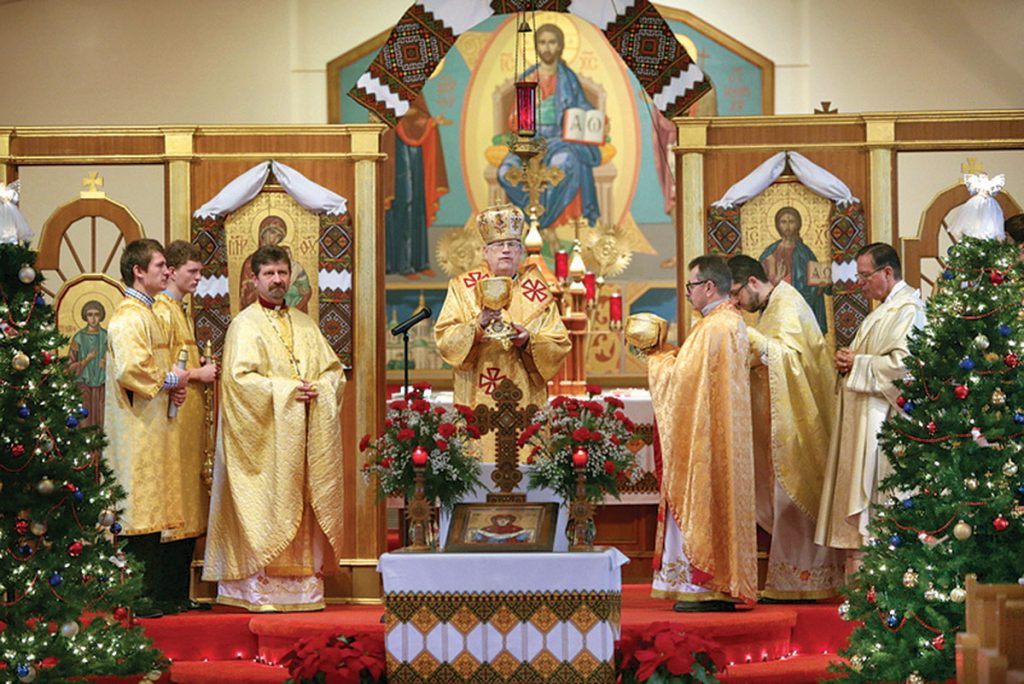 HOUSTON – Clergy, parishioners and friends gathered on Sunday December 21, 2014, at Protection of the Mother of God (Pokrova) Ukrainian Catholic Church in Houston to celebrate the 25th anniversary of the Priesthood of the Rev. Mykola Dovzhuk.

Bishop Seminack was escorted by altar servers Andrew Spring and Joseph Kuchta from the rectory to the church entrance, where he was greeted by the clergy and parishioners.  After being presented with the traditional greeting of bread and salt by Parish Council Vice-President Danylo Dankovich, Bishop Seminack led the clergy and parishioners into church and the divine liturgy commenced.

At the conclusion of the liturgy the bishop bestowed Father Dovzhuk with a cross in recognition of his 25 years of service to the Ukrainian Catholic Church.  “Axios, Axios” was exclaimed by the congregation as the cross was bestowed.

Bishop Seminack, Father Dovzhuk and the visiting clergy were greeted with applause upon entering the parish hall and were escorted to the head table.  Master of Ceremonies Eugene A. Kuchta provided welcoming remarks, and Bishop Seminack delivered the invocation.

Letters and greetings from those who were not able to attend were read and gifts from Pokrova’s altar servers and high school/junior college religious study class were presented to Father Dovzhuk.  Visiting clergy extended their greetings and best wishes with a gift of an Icon of Ss. Cyril and Methodius presented by the Rev. Chovanec.  Bishop Seminack then delivered the keynote address.

A champagne toast in Father Dovzhuk’s honor was delivered by Mr. Dankowich, followed by the singing of “Mnohaya Lita” and the presentation of the parishioners’ gift – an embroidered icon of the Last Supper.

The banquet concluded with Father Dovzhuk expressing his most sincere thank you to all who made the 25th anniversary of his priesthood memorable.