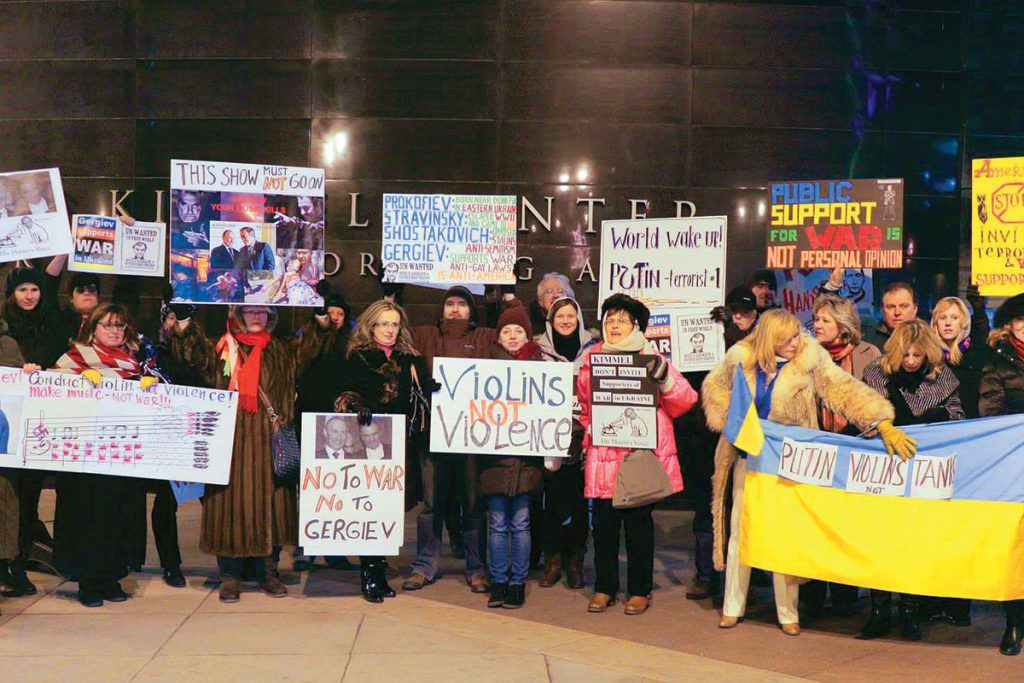 PHILADELPHIA – Nearly 50 people stood in subfreezing weather for two nights outside the Kimmel Center for the Performing Arts, Philadelphia’s premier concert venue, to protest Russian conductor Valery Gergiev’s engagement with the Philadelphia Orchestra on February 12 and 13.

Demonstrators distributed several hundred specially prepared “programs” that included information on Mr. Gergiev and the war in Ukraine, and said: “While you enjoy the concert, we ask you to consider ‘Should artists who support violence and war be welcome on the world’s best concert stages?’“ It also quoted Latvian violinist and conductor Gidon Kremer: “We – artists, cultural figures – must remain peacemakers.”

Concert-goers were generally receptive, and many said they were unaware of Mr. Gergiev’s views and glad to be informed. A few decided not to attend the performance. The local ABC television station and the Philadelphia Inquirer covered the protest.

Allison Vulgamore, Philadelphia Orchestra president and CEO, came outside on both nights and had a friendly exchange with protesters. She was sympathetic to their message and asked for extra flyers to take backstage for the musicians.

Protests have accompanied nearly all of Mr. Gergiev’s U.S. appearances. He is one of the prominent Russian artists who signed an open letter in March 2014 to “firmly declare our support of the position of the president of the Russian Federation in regards to Ukraine and Crimea.”

Two banks that are principal partners of the Mariinsky Foundation of America (sponsor of Mr. Gergiev’s U.S. tour) are currently under U.S. sanctions.

The Philadelphia action was organized by Razom (Together) for Ukraine Philadelphia, which has held dozens of rallies and other events in Philadelphia since November 2013. It was co-sponsored by Arts Against Aggression, a group that formed online, whose mission statement says: “We call upon institutions to review their policies and to consider the appropriateness of allowing vocal supporters of aggression to perform on their stages.”