Chicagoans remember heroes of the Maidan 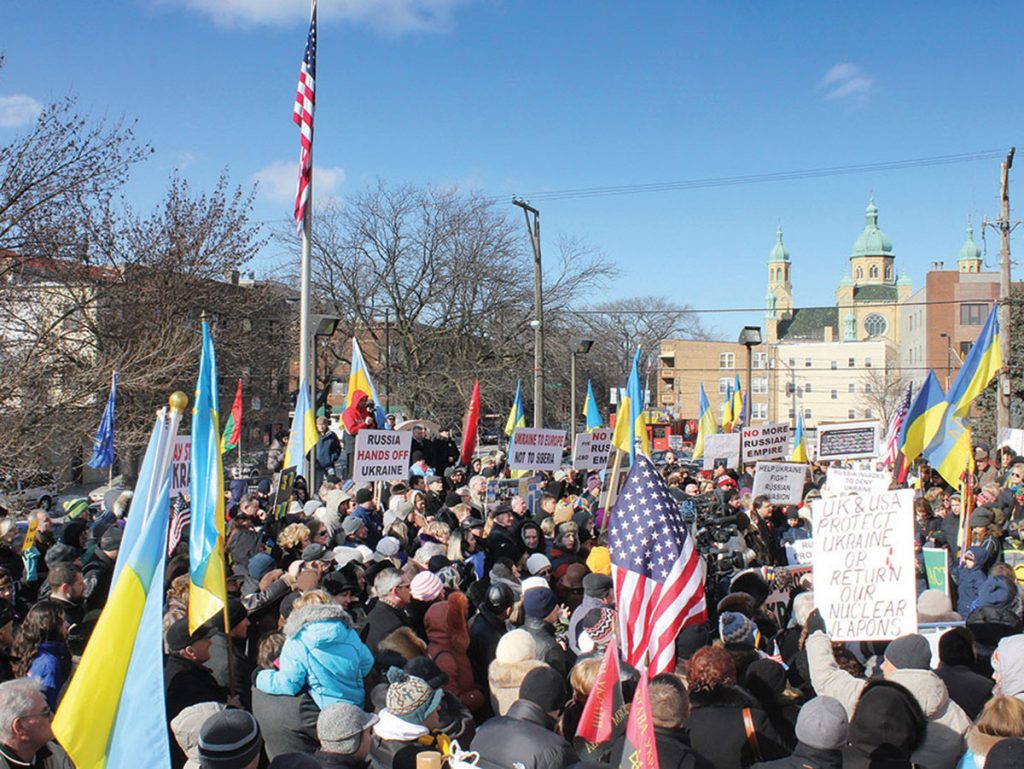 Vasyl Stetsiuk
The Chicago vigil in memory of the Heavenly Brigade.

CHICAGO – On a bitterly cold Sunday, February 22, hundreds gathered in Chicago’s Ukrainian Village to commemorate the fallen heroes of the Heavenly Brigade and to show their support for Ukraine.
The vigil started with a memorial service at Ss. Volodymyr and Olha Church in memory of the Heavenly Brigade. The dean of the Chicago Ukrainian Catholic Diocese, the Rev. Vasyl Salkovski, along with the priests of the Ukrainian Orthodox and Catholic Churches, led the service. The Rev. Myron Panchuk delivered the keynote address, in which he recited the names of the over 100 fallen heroes killed on the Maidan in Kyiv a year ago.
After the memorial service, people went out onto the plaza in front of the church, where representatives of Ukrainian organizations in Chicago, including the Ukrainian Congress Committee of America – Illinois Division and Orange Wave, organized presentations and a gathering with Sen. Richard Durbin, co-chair of the Senate Ukraine Caucus. The caucus was recently created to formally address and take positions on Ukrainian issues in Congress.

Sen. Durbin spoke dynamically, expressing solidarity with the government and people of Ukraine in opposing Russia’s military invasion and in favor of providing U.S. military assistance to Ukraine. He acknowledged that Ukrainians are fighting not only for their freedom, but for democratic values and peace for all. Ukrainians are fighting against terrorism – the terrorism sponsored by Vladimir Putin, he added.
Representatives of the Lithuanian, Georgian and other ethnic communities also joined in. People who participated in the Maidan were present at the vigil as well. They underscored that remaining indifferent is impossible and dangerous. After all, despite being far from Ukraine, activists in the diaspora have been very engaged. Proof of their involvement is evident in the work of numerous humanitarian and support funds, as well as the multitude of donations made through the sacrifice of individuals and organizations.
Upon the conclusion of the vigil, there was a meeting of the Ukrainian community with the former president of Lithuania, Prof. Vytautas Landsbergis. The meeting was sponsored by the Consulate of Ukraine in Chicago. Prof. Landsbergis spoke about the formation of Lithuania as an independent state and how his people fought for their freedom. He said he sees many parallels between Lithuania’s situation and Ukraine’s fight for its freedom today, and understands the multitude of challenges Ukraine faces.
Prof. Landsbergis stressed that the struggle Ukraine faces is difficult because it is not just a war, but because it is a political war. What is most troubling is that the rest of the world understands this and yet still tries to remain neutral, as other nations are afraid to take the first step, since that step will not only be against Russia, but against everyone who supports Russia.

It is likely that, for Ukraine to get the support it needs, may require establishing that the Russian-Ukrainian War of 2014-2015 is a war on terrorism. Ukrainians are not fighting each other, as Russian propaganda would like everyone to believe; in fact, they are fighting against Russian-funded terrorism, he noted.
Over these past several days, in nearly every corner of the world, similar commemorations and vigils for the fallen heroes of the Heavenly Brigade were held.