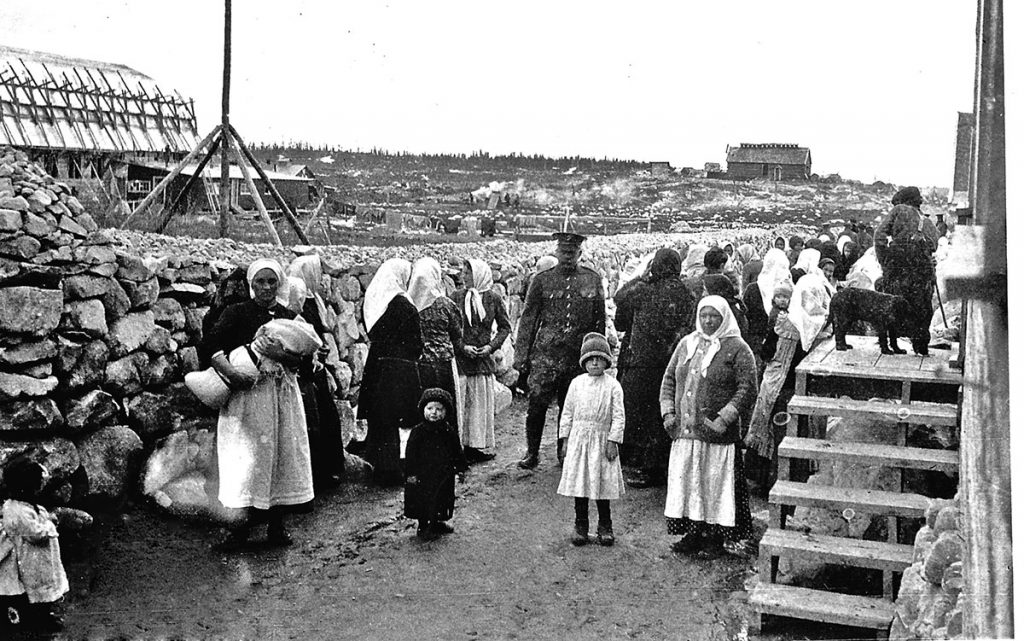 Ukrainian Weekly Editor | The Ukrainian Weekly | Subscription
Women and children interned at Spirit Lake, circa 1915, from Yuriy Luhovy’s documentary “Freedom Had a Price.”

MONTREAL – This year, Spirit Lake Internment Interpretative Center at La Ferme, Quebec, 340 miles north of Montreal, is marking the 100th anniversary of the opening of Spirit Lake internment camp, the second largest of the 24 internment camps established across Canada during World War I at the time of Canada’s First National Internment Operations (1914-1920).

One of the first to mention the internment of Ukrainians at Spirit Lake was Casimir Johan Myrvitsky, in his article written in Ukrainian, titled “Memoir of a Pioneer,” published in the 50th Anniversary Jubilee Book of St. Michael’s Ukrainian Catholic Church in Montreal. He wrote, “…World War I, which started in 1914, Ukrainians remembered well, not only in Montreal, but all of Canada …our people suffered: many lost their jobs, others were taken to internment camps at Spirit Lake …where our people worked as forced labor for 25 cents a day, clearing forests…”

Now in its fifth year of operation, Spirit Lake Internment Interpretative Center (SLIIC) was established on the original grounds of the internment site. With 20,000 visitors to date, a feature of the Spirit Lake Center is its outstanding outreach educational program, which has now developed partnerships with Quebec school boards in Amos and surrounding area, as well as with school boards in Ontario.

Group visits for students and teachers are booked well in advance with Spirit Lake, with workshops conducted at the center. Volunteers from the center also go out to high schools and have workshops in school auditoriums. Since this school year began in September 2014, 1,300 students have visited the center.

On March 29, a gala ceremony will take place in which Spirit Lake volunteer board members, with James Slobodian as board chairperson, will be presented with another award, this one from the English Association of Quebec, Neighbors, in recognition of the center’s work in furthering awareness of Quebec’s heritage and ensuring that the telling of the internment story and history of Quebec is passed on to future generations.

Spirit Lake Internment Interpretative Center’s museum, open all year to visitors with guided tours in French, English or Ukrainian, was established with the help of a major grant released in installments over five years, from Canada’s First National Internment Recognition Fund established by the federal government within the Taras Shevchenko Foundation, as well as support from Caisse Populaire Desjardins Ukrainienne de Montréal and others. A series of commemorative events will take place throughout the year.

For further information please see www.campspiritlake.ca and www.yluhovy.com (for documentaries on internment and a seven-part series on the official opening of Spirit Lake Center).