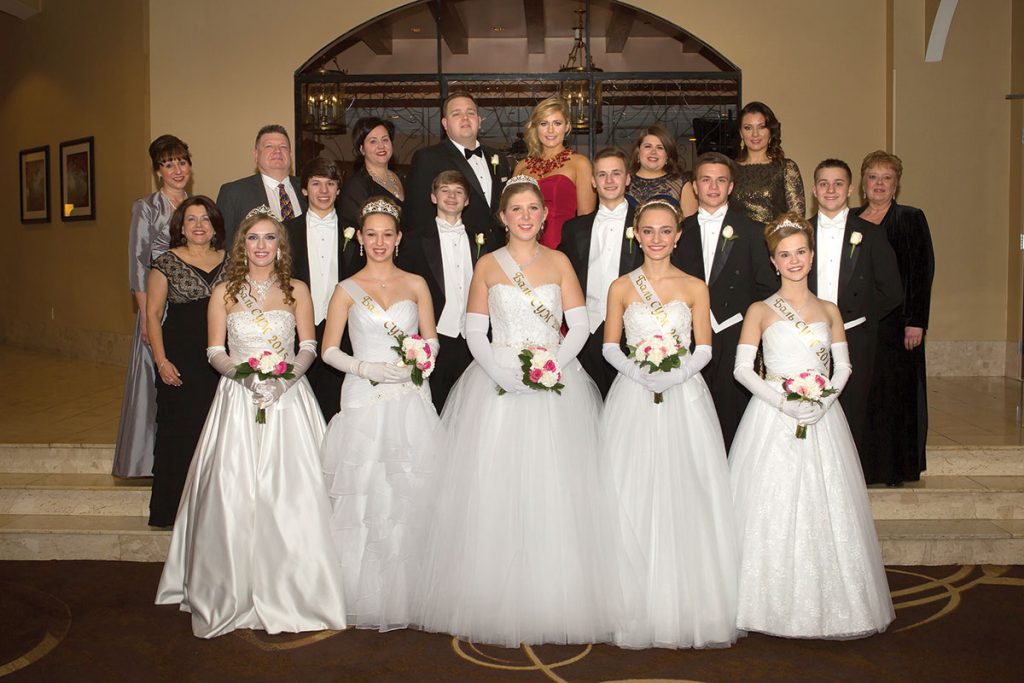 PARSIPPANY, N.J. – On February 14, the Ukrainian American Youth Association (UAYA) hosted its 51st annual Debutante Ball. Five young women made their debut before a ballroom of friends, family and guests.

This ball, held under the auspices of the UAYA National Executive, is a longstanding tradition among the UAYA community of the Northeast. The debutante ball has its roots in European court custom, as young women were introduced to adult society on their 16th birthday. This tradition came to the United States in the 19th century and in the 20th century, various Ukrainian American organizations began to organize their own balls. This year’s debutantes joined a group of almost 800 others who have previously participated in this rite of passage.

The evening began with a cocktail hour before guests were ushered into the ballroom for the presentation. Natalka Horbachevsky, co-chairwoman of the organizing committee, welcomed the guests to the formal portion of the evening.

The presentation of debutantes this year was arranged by UAYA members Yuriy Symczyk and Ulana Blahy, who served as master and mistress of ceremonies. As the guests looked on, Mr. Symczyk and Ms. Blahy introduced the debutantes one by one. Each girl, in a long white gown and elbow-length gloves, walked to the back of the dance floor, greeting her parents and receiving her bouquet. Then, met by her chosen escort in white tie attire, the debutante turned and slowly circled the floor before the guests as the emcees read out her academic accomplishments, activities and hobbies, highlighting in particular her involvement in UAYA and the Ukrainian American community. Each debutante then curtsied before the crowd, ending her independent presentation and signifying her official debut.

After the presentation, Yuriy Mykytyn, president of the UAYA National Executive, welcomed everyone to the celebratory occasion. Speaking to the debutantes directly, Mr. Mykytyn encouraged their continued participation in UAYA, particularly encouraging them to support Ukraine in its fight for freedom and to emulate the ideals of bravery, dignity and love of Ukrainian patriot Nadiya Savchenko in their daily lives.

Next, Inna Lemyzhanska read the oath that is read every year by a selected debutante, noting, as Mr. Mykytyn did, the importance of supporting men and women of the Ukrainian armed forces and of using Ms. Savchenko as a role model in their daily lives.

The last portion of the formal program was the beautiful waltz, performed by the debutantes and their escorts, choreographed by Hryhoriy Momot. Following this, the debutantes’ fathers took their daughters to dance, marking the end of the presentation itself. After a prayer led by the Rev. Vasyl Patera, the guests then sat down for dinner. Dinner was accompanied by piano music provided by Andrij Stasiw.

The “zabava” began after dinner and the bands Hrim and Zvook, from New York and Montreal, respectively, traded off playing and kept the crowd dancing non-stop. The kolomiyka, as usual, was one of the highlights of the evening, and the dance floor stayed packed until the early hours of the morning.