At U.N., Ukrainian women speak about consequences of Russia’s aggression 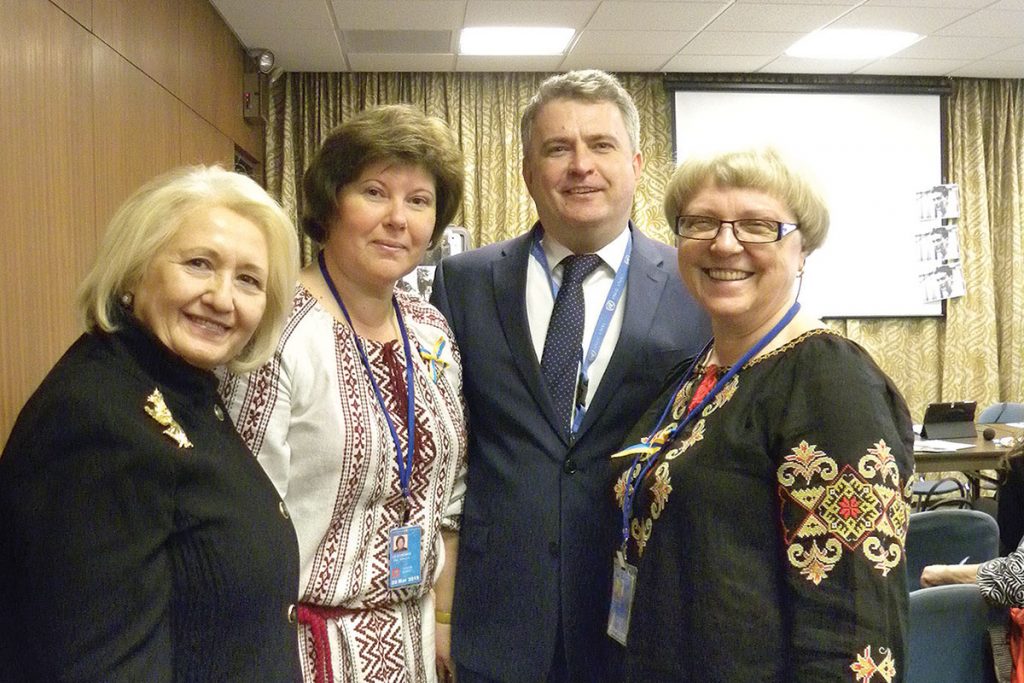 Levchenko/Kyiv
At the March 10 panel on “Women in Ukraine : The Right to Peace and Security and Sustainable Development for All” (from left) are: Melanne Verveer, Kateryna Levchenko, Serhiy Kyslytsia and Olena Suslova.

UNITED NATIONS – The annual U.N. Commission on the Status of Women (CSW), this year organized under the theme Beijing+20, was held March 9-20 in New York City and focused on progress made worldwide towards meeting goals identified at the landmark Fourth World Women’s Conference in 1995 in Beijing.

For Ukrainian women, the 1995 Beijing Conference holds a unique place of significance. This event was the first time that women from Ukraine’s diaspora, who were being represented by the World Federation of Ukrainian Women’s Organizations (WFUWO), had an opportunity to work alongside women from a newly independent Ukraine. It was an uplifting and memorable experience. Together they began to address issues important to Ukraine’s women, such as maternal and child health 10 years after the Chornobyl disaster and the nascent challenge of trafficking of Ukraine’s women.

Now in 2015, 20 years later, with Ukraine facing aggressive violation of its territorial integrity, profound threats to national and cultural identity and purposeful political and economic destabilization from the Russian Federation, the WFUWO made a concerted effort this spring to ensure that Ukraine’s representatives be given ample opportunities to present at this international event at the United Nations headquarters. WFUWO worked to ensure a visible Ukrainian presence at the CSW, and to provide Ukraine’s women forums to speak openly and bluntly about the violation of their rights to peace and security, as well as about their deteriorating conditions under the strain of Ukraine’s defensive military response.

The opening event of this year’s CSW, organized by U.N. Women, fell on March 8, International Women’s Day. WFUWO President Orysia Sushko along with the WFWUO’s U.N. representatives and a large delegation of women from Ukraine’s NGOs, joined in a march of several thousand through Manhattan to Times Square. Expressing support for the well-being of all women in the world, Ukrainian women also carried banners in protest against Russia’s war in Ukraine and distributed literature explaining the courage of Lt. Nadiya Savchenko and her hunger strike to draw attention to Russia’s violations of all norms.

During the two-week CSW, WFUWO programming priorities focused on a few key issues: revealing the dramatic effects of Vladimir Putin’s aggression on Ukraine’s population; providing a strong showing of support for Ukraine’s indigenous Crimean Tatar community displaced in large numbers after Russia’s invasion of Ukraine’s Crimean peninsula; engaging in a frank discussion of the barbaric wartime violence against women in eastern Ukraine that has been little acknowledged or verbalized; and promoting awareness of the dire need to protect the most  vulnerable and marginalized in Ukraine, those  who find themselves in need of medical care while being isolated or displaced by the conflict.

On March 9, at the Permanent Mission of Ukraine to the United Nations, guests were greeted by Ambassador Yuri Sergeyev at the opening of an exhibit of photos titled “Women and Conflict in Ukraine.” The exhibit was composed of several dozen photographs depicting Ukraine’s women in different roles during these challenging times for Ukraine. When the exhibit was originally displayed in Kyiv in December, Ukraine’s First Lady Maryna Poroshenko commented, “These photos depict women’s strengths and weaknesses, courage and vulnerabilities, worries and pain. All the women are very different, but similar in one main aspect – they do not surrender to difficulties.”

Also on March 9, WFUWO members and representatives from Ukraine’s delegation attended a panel sponsored by organizations from Russia. The panelists described the obstacles faced by civil society advocates in Russia from an unresponsive and oppressive government. Then, in response to laments by Russian representatives about the disintegration of Russia’s empire, the WFUWO U.N. representation made a passionate appeal, as members of the audience, for the Russian NGO representatives to acknowledge the deleterious effects in the region caused by the aggressive imperialism of their government and military action against Ukraine, including the illegal annexation of Crimea.

The panel “Women in Ukraine: The Right to Peace and Security and Sustainable Development for All” was presented to a capacity crowd at the U.N. Church Center on March 10. The WFUWO-sponsored event was moderated by attorney Kateryna Levchenko of the anti-trafficking organization LaStrada and included Olena Suslova of the Women’s Information and Consultative Center; Dr. Liudmyla Porokhniak Hanowska, physician and president of the National Council of Women of Ukraine; Serhij Kyslytsia, vice-minister of foreign affairs of Ukraine and chair of the Council of Europe’s Gender Equality Commission; and Irina Lutsenko, Ukrainian national deputy. Audience members, including special guest Melanne Verveer, former U.S. ambassador-at-large for global women’s issues, received unfiltered, first-hand accounts of conditions on the front in the war with Russia, the strain of caring for hundreds of thousands of internally displaced persons, and the arbitrary and barbaric violence of pro-Russian insurgents towards Ukrainian POWS and the general population.

Afterwards, Ms. Lutsenko joined Verkhovna Rada National Deputies Svitlana Zalishchuk, Maria Ionova and Irena Herashchenko at a press conference for the U.N. press corps sponsored by the Permanent Mission of Ukraine to focus on the consequences of Russia’s war in Ukraine.

WFUWO’s March 12 panel titled “One Step Back? Positive Women Speak About Beijing and Coping with Challenges to Women’s Health in Times of Conflict” was held at the Armenian Convention Center, also with a large audience attending. Ukraine is one of the newest members of the growing number of ongoing conflict zones in the world and panelists highlighted the fact that one of the most serious obstacles to the implementation of the Beijing platform is the serious destruction of a nation’s infrastructure – economic, political, social – brought about by war. Years of progress, and decades of effort could be undermined or destroyed in a matter of months, they underscored.

Leading members of the Ukrainian NGO Positive Women,  Ukraine’s premier provider of services to the community of persons living with HIV/AIDS – Iryna Borushek, Olena Stryzhak, Svitlana Moroz, and Alina Yaroslavska – were joined by Ayla Bakkallli, a representative of the Crimean Tatars. All spoke of the strain of providing services to the ill, disabled, elderly and internally displaced persons during times of conflict. They presented strong statistical evidence that the conflict created by Russia is directly responsible for the burgeoning of HIV infection in Ukraine, which even before the conflict was at the epicenter of HIV/AIDS growth in the region.

A consistent message throughout the week was that, whereas many international analysts believe Russia is capturing Ukraine’s territory to expand, build and protect itself, Russian policy was not about any of those goals, but was primarily aimed at destroying Ukraine. Besides the destruction that comes with a military invasion, the crippling of Ukraine’s still fragile infrastructure is also part of the strategy, presenters noted.

The CSW also gave Ukrainian women an opportunity to speak about the gender-based violence that is rampant in the conflict zone. The war zone sexual violence and sexualized torture of women and children as well as men, is horrific. A documentary film, based on interviews with four women affected by such violence was produced at the initiative of Dr. Lada Roslycky by Ukraine Today Television. Titled “Tortured Femininity,” the film premiered in Ukraine on March 13.. On March 14, Dr. Roslycky, newly appointed to the position of director of strategic communications at Ukraine Today, and Tatyana Pushnova, the Ukraine Today producer responsible for the film, were at The Ukrainian Museum in New York for the WFUWO-organized viewing of the film and discussion. Dontesk residents Svitlana Moroz and Olena Chervonik, curator of the Izolyatsiya – Platform for Cultural Initiatives, spoke about their experiences in the eastern oblast war zone.

A reception, hosted by WFUWO to commemorate Ukrainian participation in the 1995 Beijing Conference followed the film and discussion. WFUWO representatives active in the U.N. were honored, as were two women who were among those participating in Beijing:  Iryna Kurowyckyj of New York City, who in 1995 was the vice-president of the Ukrainian National Women’s League of America (UNWLA) and a representative of WFUWO at the U.N., and Olena Suslova of Kyiv, founder and CEO of the Women’s Information and Consultative Center. Among the guests at the reception was Elizabeth Newman, a vice-president at the International Council of Women, who thanked the Ukrainian women for their long and consistent work with the ICW (Mrs. Kurowyckyj is currently a representative of the ICW at the U.N.) and expressed sympathy for the suffering that has been inflicted upon Ukrainians.

In recognition of 10 years of dedicated leadership in the WFUWO at the U.N., President Sushko awarded Nadia Shmigel the WFUWO’s Princess Olha Award for Outstanding Service. “We are deeply grateful to you for your tremendous contribution to our organization, for your many years of hard work for the good of women in the diaspora and Ukraine,” she noted.

Also recognized for their significant contributions to the efforts of WFUWO’s U.N. representation were Hanya Krill and (in abstentia) Olya Stawnychy, who sent a greeting congratulating the WFUWO for championing the rights of women and children for decades.

The WFUWO expressed gratitude to Self-Reliance (NY) Federal Credit Union for its generous support of the WFUWO’s recent activities at the United Nations, as well as to Damian Kolodiy for videotaping and livestreaming the events of March 10, 12 and 14 (which can be viewed by searching YouTube for WFUWO.United Nations channel or visiting the WFUWO at the U.N. Facebook page).