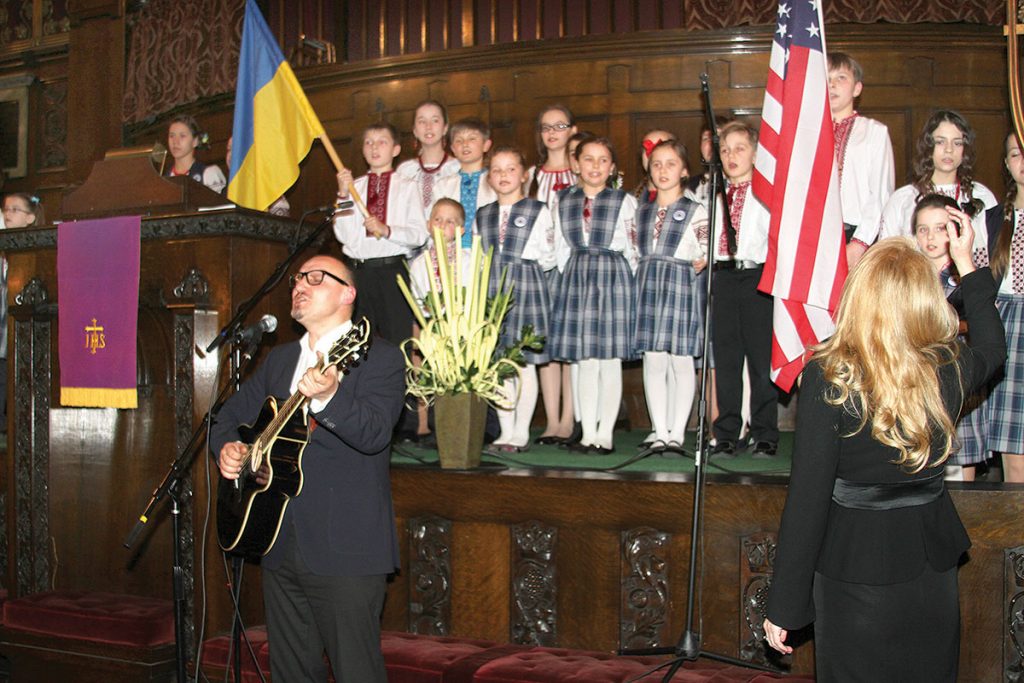 CHICAGO – The Second Presbyterian Church, in the heart of Chicago’s South Loop, hosted a fund-raising concert for Ukraine on March 28 to support humanitarian aid for families and children in Ukraine affected by the war. The concert was the idea of Kyiv native and violinist Maria Storm. The well-attended event was co-hosted by the Kyiv Committee of Chicago Sister Cities International, the U.S.-Ukraine Business Council and the Second Presbyterian Church of Chicago.

Opening comments were delivered by Kyiv Committee Chicago Sister Cities International Chair Vera Eliashevsky and Business Subcommittee Chair Lev Holubec. Present in the audience were a number of notable attendees, including the consul general of Lithuania in Chicago, Marijus Gudynas, and the consul general of Ukraine in Chicago, Andriy Pravednyk, whose closing remarks reaffirmed the importance of helping Ukraine overcome this socio-political crisis.

This event attracted an audience of multicultural music lovers interested in benefiting a humanitarian cause. Following the events of the Euro-Maidan – the Revolution of Dignity encompassing a period of protests that demanded closer European integration for Ukraine – the situation took a turn for the worse as Russian aggression sparked fighting in eastern Ukraine. This benefit concert was a remarkable opportunity to raise money for a nation in dire need of medical supplies, military equipment and international awareness.

The Second Presbyterian Church, a National Historical Landmark with an Arts and Crafts style sanctuary and 175 representations of angels throughout the majestic structure, was a truly inspiring location for this night of musical indulgence. The St. Nicholas Cathedral School Children’s Choir, under the direction of Irene Dychiy, opened the program with the American and Ukrainian national anthems.

Ms. Storm began the concert with and excerpt from Johann S. Bach’s “Chaconne.” Her performance sent the audience into a state of transcendence, and her heartfelt commentary about the war and Ukraine elicited an overwhelmingly positive response. Accompanied by her New York-based friend and pianist Emiko Sato, Ms. Storm followed with the first movement of Robert Schumann’s Sonata for Violin and Piano in A Minor, Op. 105, and Ernest Bloch’s “Nigun.” The Storm/Sato duo ended the first, classical half of the concert with Bela Bartok’s “Romanian Folk Dances,” a dramatic piece with Gypsy undertones.

Following a brief intermission, the latter half of the concert featured a more contemporary repertoire. Accompanied by guitarist Jessy Langen, Constance Volk’s powerful contralto further underscored the spiritual focus of the message about humanitarian aid. Ms. Volk’s covers of hits by Led Zeppelin and Maria McKee illustrated the power music has in connecting people – something that was evident throughout Ukraine’s Revolution of Dignity.

The audience was then treated to two-time Grammy-nominated rock and folk singer-songwriter Matthew Santos, whose ethereal vocals and simple acoustic guitar seemed to bring to life the angels of this beautiful church. In a soft-spoken voice Mr. Santos, a colleague of Ms. Storm, said “Music has the power to unite – no matter when or where, it is truly a universal language.”

The concert’s final section comprised an inspiring Ukrainian program introduced by St. Nicholas Cathedral School eighth grader Alex Tymouch reciting his poem “I Hope We Stop the Fire” – a tribute to the Revolution of Dignity and a young person’s expression of desire for peace in his native Ukraine.

A special guest, singer-songwriter Serhiy Fomenko of Kyiv, took to the stage, bringing audience members to tears with renditions of Ukrainian songs, including two selections to the words of Taras Shevchenko. Mr. Fomenko, known as Foma, was a key figure of the Maidan whose countless stage performances kept protesters hopeful.

Currently, he is the curator of the traveling exhibit titled “Maidan. Ukraine. Road to Freedom,” a collection of artifacts, photos and stories of the revolution. The intent is for this exhibit to travel the world and for people from all corners of the globe to become aware of Ukraine’s struggle for freedom.

Foma’s music engaged the audience even further as the program neared its conclusion. He was joined by the St. Nicholas Cathedral School Children’s Choir for a beautiful version of his song “Ne Spy, Moya Ridna Zemlia” (Do Not Sleep, My Native Land), marking the first time he has performed this piece with children. It was “one of the most special days of my life in the recent past,” he said as he turned to thank the children while the audience applauded vivaciously.

The epitome of the evening was the performance of “Plyve Kacha po Tysyni” by Trioda, a trio of male singers from Ternopil, Ukraine. This song, delivered as a funeral hymn for each of the Heavenly Hundred at the Maidan funeral in February 2014, has since become an international symbol of Ukraine’s current struggle for freedom.

In short, the evening was an incredible pro bono effort by musicians in support of a humanitarian cause. The concert’s proceeds will assist the Ukrainian Federation of America in continuing to provide relief in the form of food, water, clothing and medical supplies to families and children in Ukraine affected by the war.