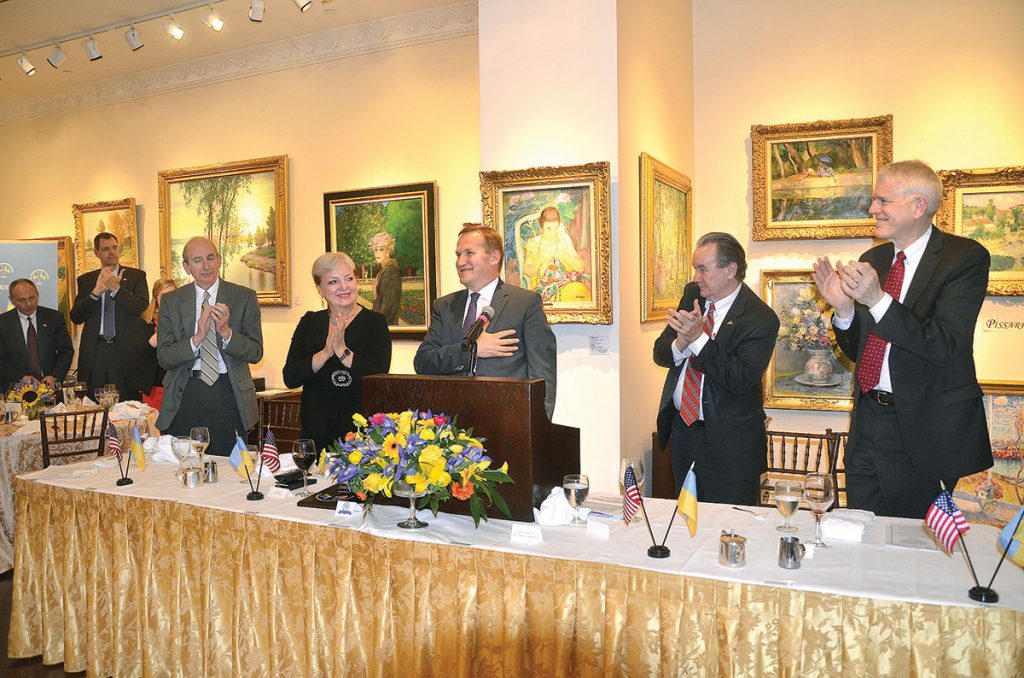 Yaro Bihun
Ambassador Olexander Motsyk (center) is applauded for his work for Ukraine during an appreciation dinner at Ritz-Carlton Guarisco Art Gallery sponsored by the U.S.-Ukraine Business Council. Standing next to him behind the head table are (from left): Roman Popadiuk, the first U.S. ambassador to Ukraine; Ambassador Motsyk’s wife, Natalia Terletska; USUBC President Morgan Williams; and Steven Pifer, the third U.S. ambassador to Ukraine.

WASHINGTON – Ambassador Olexander Motsyk, was honored here on April 16 with a “dinner of appreciation” organized by the U.S.-Ukraine Business Council at the conclusion of his five years of service as Ukraine’s ambassador to the United States.

The event, held in the Ritz-Carlton Guarisco Art Gallery, brought together more than 70 representatives of the U.S. government, prominent corporations, Washington think tanks and Ukrainian-American organizations, many of whom used the occasion to publicly express their gratitude for his service in helping improve U.S.-Ukraine relations.

Two former U.S. ambassadors to Ukraine – Roman Popadiuk and Steven Pifer – joined Ambassador Motsyk, his wife, Natalia Terletska, and USUBC President Morgan Williams at the head table of the event, and shared their views about his work and accomplishments while serving in Washington.

Mr. Popadiuk, the first U.S. ambassador to serve in Ukraine, pointed out that the last 18 months – which saw increased Russian aggression in Ukraine and the developing U.S. policy in response to it – brought into focus Ambassador Motsyk’s service here, his dedication, professionalism and skill in marshaling U.S. policy responses with the administration, on Capitol Hill and in reaching out to the American people.

Mr. Pifer, who was the third U.S. ambassador to serve in Ukraine, also noted the difficulties facing Ambassador Motsyk in his service here. The envoy came to Washington in 2010, when U.S. relations with Ukraine under President Viktor Yanukovych were not at their best, he said, and they worsened further during the Maidan protest crisis.

In his remarks, Mr. Motsyk admitted that his tenure as ambassador in Washington “really was quite difficult.” He was trying to dedicate his efforts in the interest of his country and its people, and to develop better relations with the United States, he said.

“Ukraine has to be a democratic country, a prosperous country, a country for its people, in which everybody would be proud to live,” he said, and added that he greatly appreciated having had a chance to be Ukraine’s ambassador to the United States – “this really great and amazing country.”

Ambassador Motsyk noted that the United States is not only leading in the support of Ukraine but pressuring the European Union and other countries of the world to be more helpful in this hard time.

Mr. Williams presented Ambassador Motsyk with the USUBC’s Distinguished Service Award for his work here and a small sculpture (from the White House Historical Association) depicting Present Lincoln and his son Tad in Richmond, Va., three days after the Confederacy surrendered, ending the Civil War leaving President Lincoln with the task of binding the nation’s wounds.

“Your country is having problems. Your country is at war,” Mr. Williams said. “As you go back, we hope that you will go in the spirit of Lincoln to bind up the wounds that Ukraine has suffered and to rebuild what has been destroyed,” he added.

The 204 members of USUBC include such corporations as Microsoft, Westinghouse, Coca-Cola, DuPont, SigmaBleyzer, Ukrainian International Airlines, as well as such organizations as The Ukrainian Museum, Ukrainian Freedom Fund and Ukrainian American Bar Association.

Mr. Motsyk is the sixth Ukrainian ambassador to serve in Washington since 1992. As noted on the Embassy’s official website, he is a career diplomat.  He was born in Rivne in 1955 and, after graduating from Kyiv’s Taras Shevchenko State University, majoring in international relations in 1981, he joined the Ministry of Foreign Affairs of Ukraine. In addition to serving in increasingly more responsible positions at the ministry, he has also served as ambassador to Turkey (1997-2001) and Poland (2006-2010).

The April 16 USUBC appreciation dinner took place two days after President Petro Poroshenko’s April 14 announcement about the conclusion of Ambassador Motsyk’s assignment here, although it had been organized earlier that month.

Ambassador Motsyk indicated in his remarks that he and his wife would be departing for Kyiv in 10 days.

His next assignment has not yet been announced, and neither has there been any official announcement about who will replace him in Washington. But there have been reports in the Ukrainian media that it may well be the deputy head of President Poroshenko’s administration, Valeriy Chaly, who visited the Embassy in Washington on April 3.