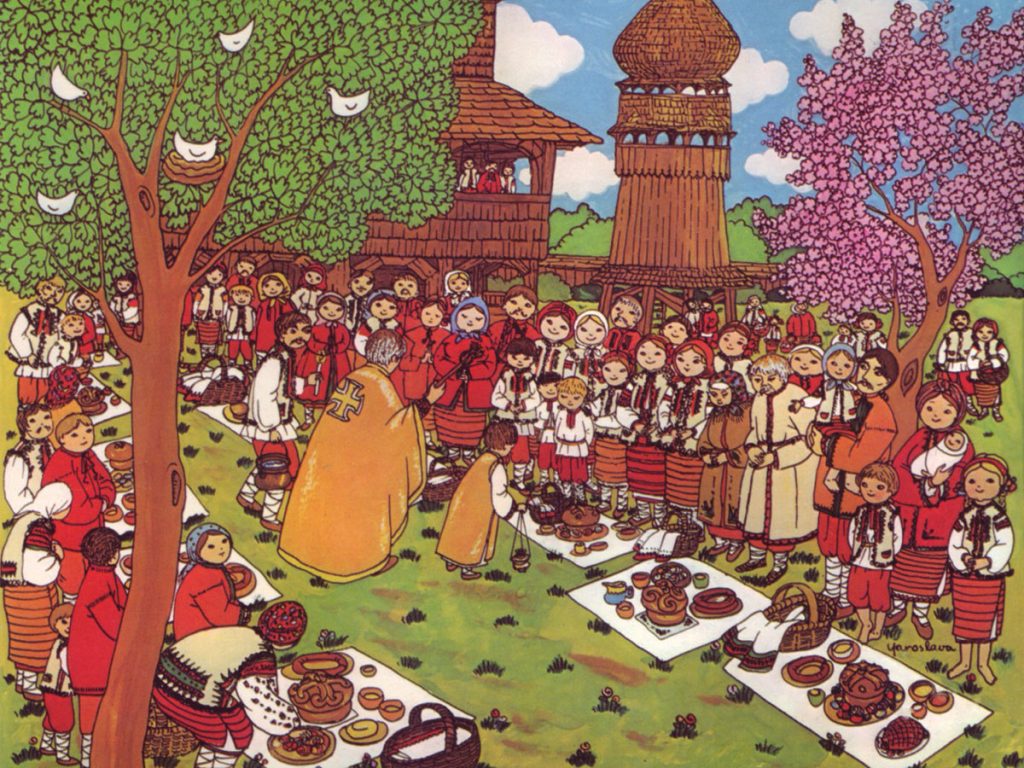 Ukrainian Weekly Editor | The Ukrainian Weekly | Subscription
“Easter Blessing,” a glasspainting by Yaroslava Surmach Mills, reproduced on a card published in 1980 by the Surma Book and Music Co.

Below is the Easter pastoral of the Ukrainian Catholic hierarchy of the U.S.A. to clergy, hieromonks and brothers, religious sisters, seminarians and beloved faithful.

Christ is Risen! Indeed He is Risen!

“Then (the women) went out and fled from the tomb, seized with trembling and bewilderment. They said nothing to anyone for they were afraid.” (Mk. 16:8)

When we read the Gospels, we can be surprised to learn that it is also those who are the closest companions of Christ who fled in terror. When Judas led the soldiers into the Garden of Gethsemane and betrayed his Master, it is the disciples who fled for their lives. Later, it is Peter, fearing a similar fate, who denied Jesus three times. And almost at the very end of the Gospel, following the crucifixion, death and resurrection of Jesus, it is the women who came to the tomb very early on that first Easter Sunday morning, whom we witness fleeing in fear and astonishment. Why did they flee? Were they afraid for their lives as were Peter and the other disciples?

Certainly, we must admire the tenacity of the faith of Mary Magdalene and the other women for coming to the tomb in the first place to anoint the body of Jesus. It is astonishing they did not let themselves become discouraged either by the fearful events they had just witnessed two days earlier or by the impossibility of what they planned to do. After all, how were they to get past the soldiers guarding the tomb and whose aid could they enlist to help them roll away the great stone at its entrance?

But God, in rewarding their faith, removed all obstacles – the soldiers are struck dumb and the stone is miraculously rolled away by an angel in the form of a young man who now sits at the head of the place where Jesus was laid. He tells them that Jesus is not there, that He is risen and that He will meet them and the disciples in Galilee. But instead of responding with joy to this unexpected announcement, the women are seized with fear and run off in haste.

Their reaction is not surprising because they had come to the tomb to pay their final respects to their Teacher, who had died a horrible death. They were taken aback to discover the grave empty and still more when they heard the message of the angel. And they were overcome with fear when they realized that the empty tomb had completely upended their world and challenged everything they thought they knew. If their eyes were not deceiving them and if what the young man in the tomb said was true, then the whole world had changed radically with Jesus’ resurrection, and that meant they had to change too. The women had come to the tomb to honor a man who had died. Instead, they were sent out to proclaim that he is very much alive. Little wonder they were afraid!

Once again this year, we have completed our Lenten journey of prayer and repentance and, having spiritually relived the final terrible days of Jesus’ earthly life in the liturgical services of Holy Week, we find ourselves, along with the pious women, kneeling at the foot of the empty tomb of Jesus.

How will we respond to the astonishing sight of the empty tomb and the words of the angel? Will we too run away in fear, unable to face a God who overturns our understanding of the world? Will we flee from the personal challenge that He presents to us? Or, will we come to the empty tomb and find our hope?

Whatever our hopes are – for reconciled relationships, for healing from physical illness or emotional hurts, for a closer relationship with God, for peace in our families, our parish communities, our country, for an end to the senseless spilling of blood in Ukraine and for the restoration of peace in our homeland – they are all found in the empty tomb. For God has reconciled everything to himself by making peace through the blood of the cross and through the crucified and resurrected Lord, the firstborn of the dead and the beginning of the new creation. (Col. 1:19, 20)

Today we celebrate the resurrection of the Messiah, the Son of God. We, like the women, must tremble with amazement when we approach the empty tomb. Christ is truly Risen! How wonderful it is when we meet the living God!

Our fervent prayer is that our Resurrected and Living Lord may bestow his peace and grace upon you and your loved ones, upon all our brothers and sisters scattered throughout the world and especially upon our beloved and suffering Ukraine.

Christ is Risen! Indeed He is Risen!