Protesters rally for arms for Ukraine in front of White House 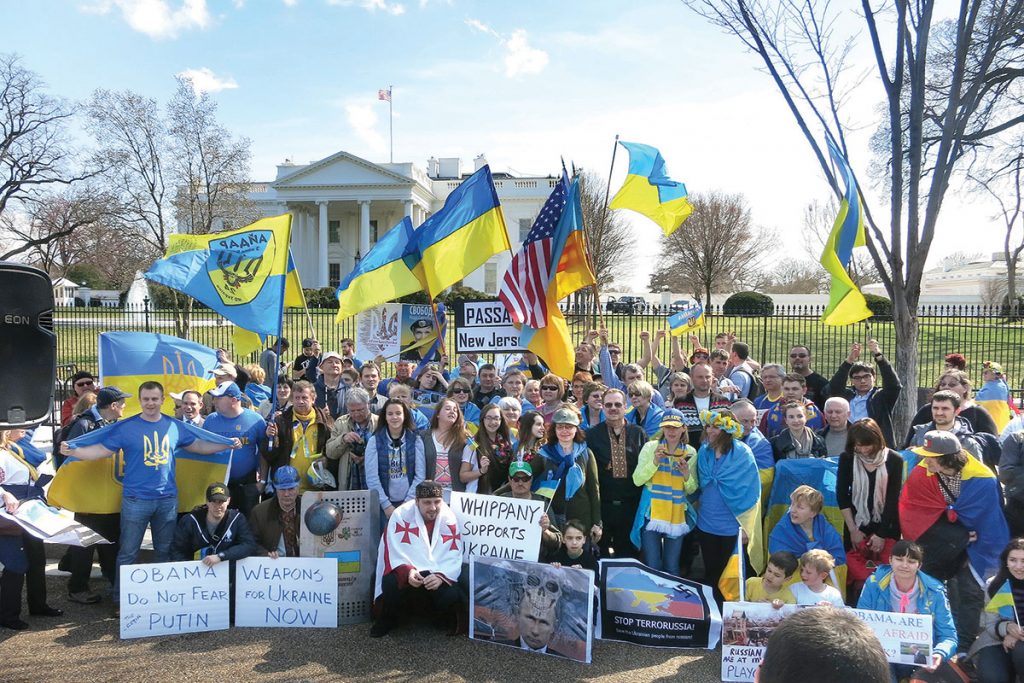 Matthew Dubas
Ukrainians are joined in front of the White House by Georgians, Latvians, Estonians, Lithuanians, Circassians and Poles with calls for the U.S. to arm Ukraine.

WASHINGTON – More than 300 people gathered on the plaza in front of the White House on March 26 to demand that the Obama administration send lethal defensive weapons to Ukraine. The protest attracted not only Ukrainians, but representatives of Latvia, Lithuania, Estonia, Belarus, Poland, Georgia, Armenia, as well as Circassians. Representing the Ukrainian community clergy, Bishop John Bura of the Ukrainian Catholic Church was in attendance.

First to the podium was Rep. Bill Pascrell (D-N.J.), a member of the Congressional Ukrainian Caucus, who spoke of the bipartisan support in Congress with the Ukraine Freedom Support Act (UFSA) that was unanimously passed by both the Senate and the House of Representatives in December. The world is awaiting President Obama to fulfill the terms of the UFSA, which he signed into law following its passage, Rep. Pascrell said.

Janusz Bugajski, senior fellow at the Center for European Policy Analysis (CEPA), offered his words of support for arming Ukraine.

Former U.S. Ambassador to Ukraine John Herbst noted Russian President Vladimir Putin’s continuation of Russian aggression toward Ukraine and Europe. “The White House does not understand the situation, that the Kremlin’s aggression must have a cost – more than sanctions. Ukraine’s military is under-armed and needs the authorized defensive lethal weapons.” Ambassador Herbst, who is director of the Dinu Patriciu Eurasia Center at the Atlantic Council, added that a new policy needs to be put in place, as the Atlantic Council recommended $1 billion of military aid over the next three years.

Lithuanian American Community, said that the Lithuanian people are 100 percent behind Ukraine. Ms. Vidutis informed protesters about the organization Blue-Yellow.lt, which has been working toward aiding Ukraine and highlighting its humanitarian needs, as well as countering the disinformation coming from Moscow. “Ukrainians have an ally in the Lithuanian president, Dalia Grybauskaite,” she said. Noting the $350 million in aid authorized by the USFA, she urged the people who support Ukraine’s democracy to contact their U.S. senators and congressmen, as well as the president.

Rep. Adam Smith (D-Wash.) on February 12, the bill has 33 co-sponsors, including Rep. Pascrell.  The resolution authorizes: “The secretary of defense, in coordination with the Secretary of State, to provide assistance (including training, equipment, lethal weapons of a defensive nature, logistics support, supplies and services) to the military and national security forces of Ukraine through September 30, 2017, to help Ukraine: (1) secure its sovereign territory against foreign aggressors, (2) protect the Ukrainian people from attacks posed by Russian-backed separatists, and (3) promote the conditions for a negotiated settlement to end the conflict.”

Information Service (UNIS), the Washington-based information arm of the Ukrainian Congress Committee of America (UCCA), thanked the Baltic countries for their support of Ukraine.

Lithuania’s Ambassador to the U.S. Zygimantas Pavilionis noted that there are many challenges to combating Russian aggression. “Russia,” he said, “is provoked by weakness.” But the costs, through sanctions, are increasing for Mr. Putin. There was a chance in 2008 for NATO enlargement to include Ukraine and Georgia, he added, but that was a missed opportunity, and now we need to find way to stop the advance of Russian tanks in Ukraine.

Ambassador of Georgia to the U.S. Archil Gegeshidze underscored Russia’s use of proxies in its acts of aggression, “we have already seen this move,” noting Russia’s invasion of Georgia and subsequent dismemberment in 2008. Georgia, he said, was punished by Russia for its choice to be closer to Europe and possibly NATO. Ambassador Gegeshidze highlighted the solidarity between Georgia and Ukraine, and thanked the Ukrainian government and its people for their support.

Ukraine’s military, Ambassador Gegeshidze continued, lacks resources, and “the fight for freedom is no fairy tale with a guaranteed happy ending, where good triumphs over evil. All of our efforts will be needed for freedom and prosperity.” The Kremlin’s policies, he said, threaten democracy all over the world that will require much effort and strategy in the response as the world stands by Ukraine.

Journalist Askold Krushelnytsky, who had returned from the frontlines after meeting with Ukrainian soldiers of the 37th unit of the Azov Volunteer Battalion, provided his assessment of the volunteers in contrast to the Russian regulars.

The Ukrainian volunteer battalion stationed in Zaporizhia, he said, has a localized membership that ranges in age from 19 to 63, some with Soviet military experience and some with absolutely zero battle or military experience. Members of the Aidar and Azov volunteer battalions are mostly Russophone, but see themselves as Ukrainians. There is a lack of respect for the shaky ceasefire from Russia that does not bode well, he added, but Ukraine has a strong will and a strong spirit, and he recommended that Ukraine’s Western allies could squeeze Russia further with a full embargo on all Russian exports. No one in Ukraine is asking for U.S. boots on the ground, he said, but Ukraine should be given arms to defend themselves against Russian aggression. These volunteer troops, he added, are very grateful to the diaspora support from all over the world.

After a few chants of “U.S.A., arm Ukraine,” Mr. Sawkiw reminded the audience of the terms of the Budapest Memorandum of 1994 that was supposed to be a guarantee of Ukraine’s territorial integrity and sovereignty after the country voluntarily gave up the third-largest nuclear arsenal in the world. U.S. assistance to the government of Ukraine is necessary in countering the destabilization of the Russian occupation in Ukraine, Georgia and Moldova, he added. A comprehensive effort is necessary to increase Ukraine’s military capabilities so that Ukraine can defend its sovereignty and ensure its territorial integrity. Section 3 of the Ukraine Freedom Support Act details such assistance.

Alice Kipel from the Belarus Association of the United States, as a member of the Central and East European Coalition (CEEC), offered its support for Ukraine, saying this is a global issue, and adding, “the Belarusian community continues to support the Ukrainian community work, as Belarus has the same democratic aspirations for Belarus.”

Marju Rink-Abel, president of the Estonian American National Council, also a member of the CEEC, noted that she was with Ukrainians last year in front of the White House to protest the invasion of Crimea by Russia. Nothing has happened to make things better, and in fact things have gotten worse. Congress has authorized President Barack Obama to provide arms to Ukraine, and yet he doesn’t do it, she said.

Mr. Sawkiw reminded protesters of the Congressional support for Ukraine during the Euro-Maidan protests, during the invasion of Crimea and Ukraine’s eastern regions, citing Sen. Robert Menendez (D-N.J.) and his efforts in the Senate Foreign Relations Committee and the Senate Armed Service Committee, which called for arms and humanitarian assistance for Ukraine.

The Ukrainian diaspora has been able to do much with the support from the Congressional Ukrainian Caucus, Mr. Sawkiw added.

Ausma Tomasevics of the American Latvian Association recommended that U.S. sanctions on Russia should continue, noting that Ukraine’s military needs assistance to defend itself against Russian aggression. Ukraine, he added, has been a reliable military ally in NATO operations and counterterrorism operations, and deserves U.S. support with defensive arms.

Mamuka Tsereteli of the Georgian Association of the United States noted that Russia is attempting to divide Ukraine and underscored Ukraine’s need to be able to defend itself.

Karl Altau of the Joint Baltic American National Committee explained how Russia as an energy supplier has played a role in Russia’s war against Ukraine. “We need to unceasingly petition for arms for Ukraine – e-mail your friends and relatives to make sure the message is heard loud and clear.”

Speaking from the Armenia Assembly of America, Brian Ardamy pledged his organization’s support to the people of Ukraine for their right to live in a democratic and independent state.

Yuriy Mykytyn, president of the national executive of the Ukrainian American Youth Association (UAYA), directed his comments at President Obama, “Why are you not sending arms to Ukraine as part of the Ukraine Freedom Support Act which you signed?”

Mr. Mykytyn also noted the U.S. failure to uphold the terms of the 1994 Budapest Memorandum. Mr. Mykytyn continued: “The Maidan, the Revolution of Dignity, was based on Ukraine’s desire to turn to Europe and finally rid itself of Russia’s centuries-old subjugation. We must continue to demand U.S. military assistance so that Ukraine can defend itself against Russia. We must continue contacting President Obama and Congress to achieve this goal.”

He added, “As members of the Ukrainian American youth, we are most concerned about Ukraine’s victims – the children of Ukraine who have lost their fathers in the war against Russia and have been displaced by the war.”

Ivan Rodichenko from the Kyiv Rus’ 25th Volunteer Battalion in Ukraine also spoke during the protest, thanking the diaspora – most notably the New York City branch of the UCCA – for its support of Ukraine’s volunteer forces.

Roman Volytsky, a Ukrainian patriotic supporter from New York state, reported on the needs of these volunteer battalions for humanitarian aid. Mr. Volytsky had brought with him a shield and painted helmets from the Euro-Maidan protests in 2014, explaining to the protesters the “heavy equipment” the protesters had then. He also explained the plight of the Aidar Volunteer Battalion, which his local community has been supporting with humanitarian assistance. Mr. Volytsky also underscored the case against Ukrainian pilot Nadiya Savchenko, who is being illegally imprisoned by Russia, and the need to continue to support her freedom.

“Our work is not done,” Mr. Sawkiw said, calling on participants to work with their communities, churches and organizations to appeal to President Obama to arm Ukraine with lethal defensive weapons that only the U.S. can offer. We need to continue to work with our congressmen and senators, and remember to send thanks to those who have continued to support us and to reach out to those who have not voted in favor to possibly inform them of the situation, he said.

Following the protest, participants from New Jersey attended a brief commemoration at the Taras Shevchenko monument in Washington, where they  laid flowers and sang Shevchenko’s poem “Testament.”