Shevchenko year is commemorated in Manitoba 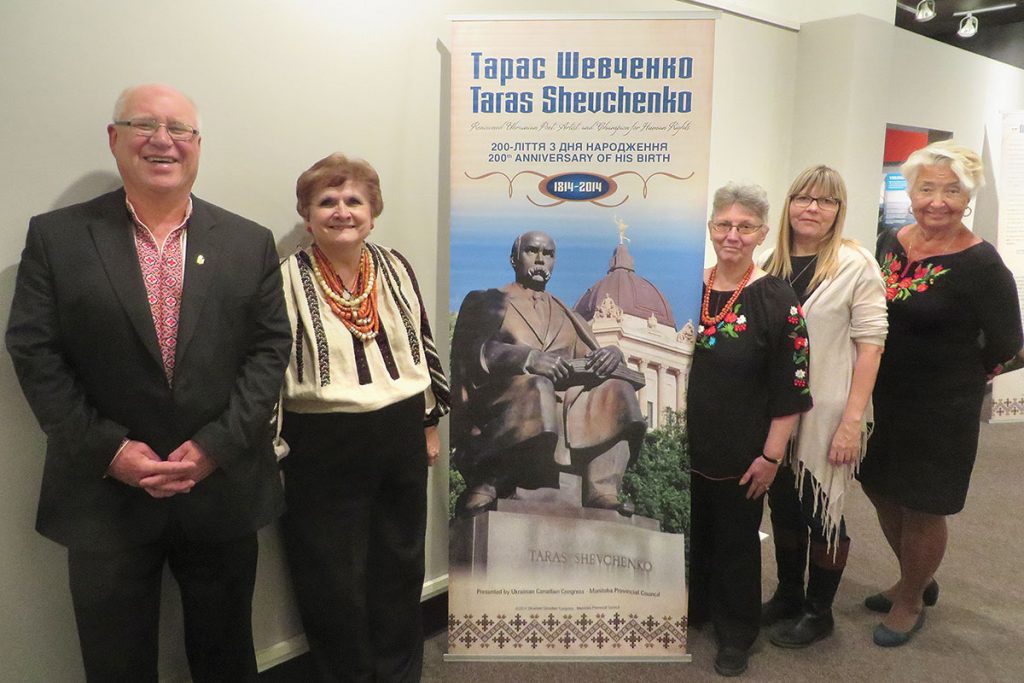 WINNIPEG, Manitoba – Shevchenko Year culminated in Winnipeg on March 8, with a gala concert, as the Ukrainian community in Manitoba celebrated the 200th anniversary of the birth of Taras Shevchenko (1814-1864). Shevchenko was an artist, a writer, a fighter for human rights – and Ukraine’s greatest poet. His influence on the Ukrainian nation was such that his poetry and his image were prominent during the Maidan protests of 2013-2014 in Kyiv.

The celebrations will continue well past March, with the most recent event being the opening April 2 of the traveling Shevchenko exhibit at the New Iceland Heritage Museum in Gimli, Manitoba. Speaking at the opening were Gimli Mayor Randy Woroniuk, the museum’s Executive Director Tammy Axelsson, and the curator and writer of the exhibition Orysia Tracz. Committee members Oksana Shulakewych and Joan Lewandosky also made the trip from Winnipeg, with Lubomyr Borys Shulakewych being volunteered as the kind driver, exhibition handler and photographer.

Under the auspices of the Ukrainian Canadian Congress Manitoba Provincial Council (UCC-MPC), many events throughout Manitoba celebrated this anniversary. A separate committee had been struck in March 2013 to plan and coordinate the activities and events of the upcoming year. The committee was chaired by Myroslava Pidnirnyj, with members Ms. Shulakewych, Ms. Tracz, Ostap Skrypnyk, Susan Zuk, Paulette Monita, Nataliya Sovinska, Dr. Orest Cap, Dr. Roman Yereniuk, Iryna Konstantiuk, Joan Lewandosky, Maria Puhach and Oksana Bondarchuk (ex officio, president of UCC-MPC). Metropolitan Archbishop Yurij of the Ukrainian Orthodox Church of Canada and Metropolitan Archbishop Lawrence Huculak of the Ukrainian Catholic Church of Canada were honorary patrons for the year-long commemoration.

The Shevchenko 200 Committee and the Ukrainian Students’ Association at the University of Manitoba showed a series of documentary films about Shevchenko from March to April 2014.

At the main Winnipeg Millennium Library on April 15-May 10, 2014, an exhibition dedicated to Shevchenko was prominently featured on the main floor display area. Similar displays were installed at the University of Manitoba Library and at the Holy Family Home.

The official naming ceremony of Honorary Taras Shevchenko Way took place on October 17, 2014. The city of Winnipeg had designated a one-block stretch of Aberdeen Avenue, between Main Street and the Red River, at the Holy Family Home. Mayor Sam Katz brought greetings on behalf of the city. City Councillor Paula Slobodian Havixbeck was instrumental in getting this portion of Aberdeen Avenue renamed as Honorary Taras Shevchenko Way.

The city of Winnipeg also designated March 2014 as Taras Shevchenko Month and flew the Ukrainian flag to mark this event. On March 10, Mayor Katz hosted a civic luncheon for 50 members of the community at City Hall in honor of the 200th anniversary.

Premier Greg Selinger of Manitoba issued a proclamation declaring March 9-15, 2014, as Taras Shevchenko Week in the province. Both the city and the province flew the Ukrainian flag on March 8-10.

The official unveiling of the Taras Shevchenko Traveling Exhibit was held on July 16, 2014, on the first floor of the Manitoba Legislative Building. Minister of Multiculturalism and Literacy Flor Marcelino, along with Metropolitans Yurij and Lawrence cut the ribbon that officially opened the exhibit. The 10-panel exhibit was displayed at the Legislative Building until July 28, 2014, and was seen by over 5,000 visitors to the building. The display not only focused on the historical Shevchenko, but also emphasized the Manitoban and Canadian connections to Shevchenko, as well as his current influence in contemporary Ukraine.

The traveling exhibit was displayed at Canada’s National Ukrainian Festival in Dauphin, Manitoba, on August 1- 3, 2014. It returned to Dauphin schools and nearby communities in March of this year.

Additionally, the exhibit was showcased at the UCC-MPC Folklorama – Kyiv Pavilion on August 3-9, 2014, in Winnipeg. Some 30,000 pavilion visitors had the opportunity to view the exhibit. This year, on January 29-31, the exhibit was at the at the Lieutenant Governor’s Winter Festival Ukrainian Pavilion in Brandon, Manitoba, and in the Library of Brandon University.

It was also displayed during National Human Rights Day ceremonies on the campus of the University of Manitoba, at the Ukrainian Self-Reliance Association Provincial Conference held at St. Andrew’s College, during the Ukrainian Canadian Congress national annual general meeting in Winnipeg, and as part of the “Bratstvo: Hoosli Male Chorus and Taras Shevchenko Bandurist Chorus Concert” at the Playhouse Theater in Winnipeg. Later this spring and summer it will be at the Shevchenko School in Vita, Manitoba, and at the 50th jubilee of the Gardenton Ukrainian Museum at its festival on July 11-12.

The Shevchenko Committee assisted with the organization and execution of the annual commemorative activities of youth organizations which take place at the Shevchenko monument on the grounds of the Manitoba Legislative Building. These observances included the Alexander Koshetz Choir conducted by Myroslava Paches and a children’s choir composed of the students of Ukrainian Saturday schools and R.F. Morrison’s bilingual program (through the Manitoba Parents for Ukrainian Education). Metropolitans Lawrence and Yurij were present, as were politicians representing the federal government (MP James Bezan) and the province (Minister of Mineral Resources Dave Chomiak). Ukrainian Youth Association in Canada  and Plast Ukrainian Scouting Organization led the event as per tradition. A larger than usual crowd was in attendance, and the event enjoyed media coverage from local television stations. Minister Chomiak hosted a reception in the foyer of the Legislative Building.

Dr. Myroslav Shkandrij delivered an innovative keynote address on Shevchenko’s importance to the world. Winnipeg artist Orysia Sinitowich-Gorski presented her lithograph of Shevchenko to City Counsellor Mike Pagtakhan; it will be displayed at Winnipeg City Hall.

In coordination with the Shevchenko Anniversary Committee, the Manitoba Parents for Ukrainian Education (MPUE) initiated an art project that spanned all grade levels throughout the 12 English-Ukrainian Bilingual Program (EUBP) schools in Manitoba. Over 600 students from kindergarten to Grade 9 worked under the guidance of five commissioned artists to create a child’s interpretation of Taras Shevchenko’s contributions to Ukrainian cultural identity. Their combined efforts resulted in six fabric-based murals, four feet wide and eight feet in height. These murals were also exhibited throughout Manitoba. (See http://mpue.ca/, scroll down to “Taras Shevchenko: 200th Celebration Through Art”.)