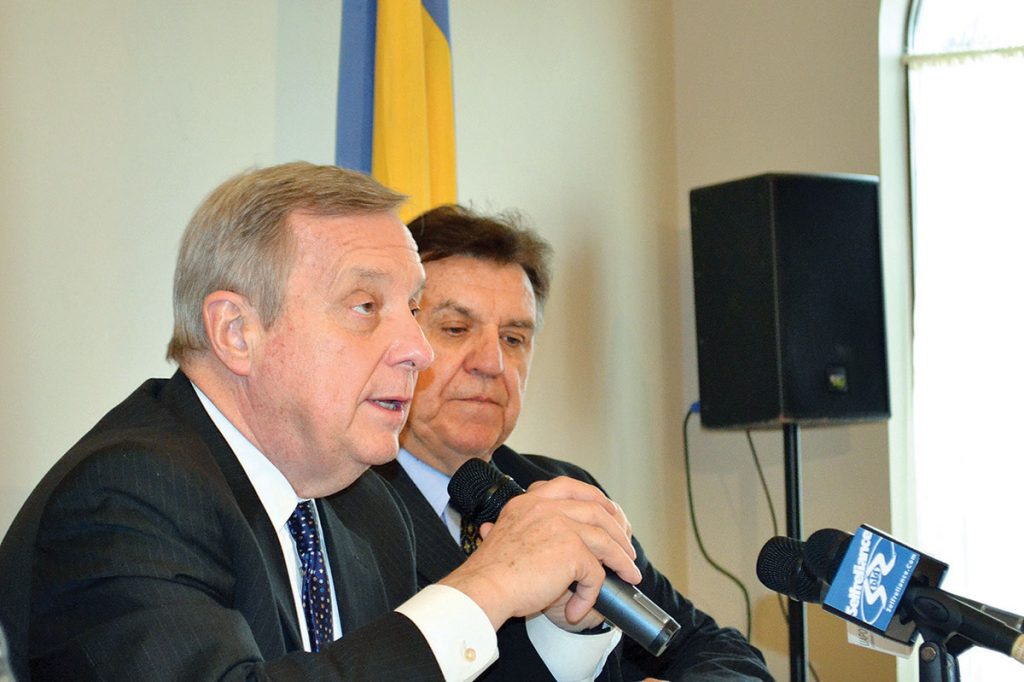 CHICAGO – Sen. Dick Durbin (D-Ill.)recently briefed representatives of the Ukrainian, Polish and Baltic communities in Chicago on his participation in a five-day international conference held by the Aspen Institute in Berlin.

Six senators and nine House members from the Republican and Democratic parties, alongside members of the Bundestag, as well as the Ukrainian and Russian delegations, contributed to a dialogue on the state of affairs of the Minsk II ceasefire protocol. The Minsk II ceasefire was signed on February 11 with the participation of Ukraine, Russia, France and Germany. It was as a response to the failure of the initial Minsk I protocol agreed upon on September 5, 2014, over the self-proclaimed Donetsk and Luhansk people’s republics’ lines of control that collapsed in January of this year.

Speaking at the April 9 briefing for the Chicago community, Sen. Durbin said the Minsk II agreement is “nominally in place” and designed to “stop the killings.” Ukraine’s Prime Minister Arseniy Yatsenyuk, the nation’s chief representative at the conference, underscored that, in spite of the ceasefire, “people are still dying” and “many are still being displaced within Ukraine due to fear.”

Sen. Durbin ascertained that Prime Minister Yatsenyuk is deeply concerned over the current issue, yet he is hopeful it will be soon resolved diplomatically with assistance from the West. The senator also stated that after the report titled “What the United States Must Do,” issued in February by the Atlantic Council, Brookings Institute and the Chicago Council on Foreign Relations, Democrats, along with Republicans, such as Sens. John McCain (R-Ariz.), Mark Kirk (R-Ill.) and Rob Portman (R-Ohio), among others, are actively pushing the White House and are to make a formal request to legislate the provision of nonlethal defense systems to the Ukrainian government.

Sen. Durbin accentuated the need to deliver this weaponry immediately. An arsenal of unmanned drones would significantly reduce the risks of losing military lives while tracing the rebels’ troop movements. Furthermore, a precision missile tracking system would greatly ameliorate the risks to innocent civilians in the Donbas caught in the crossfire between Russian-backed forces and the Ukrainian army.

Having discussed the ceasefire issue with ambassadors from Ukraine and the Russian Federation, as well as the foreign affairs minister from and the chancellor of Germany, Sen. Durbin stated that Angela Merkel is the foremost leader who is trying to “make the ceasefire work” through diplomatic discussions with the Kremlin. Given their territorial proximity, Sen. Durbin expressed profound skepticism and concern regarding the Minsk II ceasefire, as the Baltic states, Poland and Moldova are potential easy targets for Russia. If Russia decides to use its full force, it will overwhelm the capacity of the Ukrainian military, and advance through the entire country within days, he noted.

Considering that Russia’s military is one of the strongest in the world and that President Vladimir Putin is unpredictable, Sen. Durbin added that it is yet to be seen what the reaction of the U.S. government, as well as the European Union, would be if the Kremlin crossed the line and moved into a NATO country. However, Sen. Durbin stated that, in his view, the advancement of the so-called rebel forces into Mariupol would constitute “crossing the line” – this would clearly be a breach of ceasefire and the Minsk II Protocol would be nullified, therefore, it would require immediate action by the United States.

Over all, Sen. Durbin emphasized the peculiarity of the issues at stake. Despite clear opposition from the West, the impact of the imposed sanctions on Russia’s economy, the effect of falling oil prices on Russia’s revenues, the skyrocketing exchange rate against the U.S. dollar, and the increase in the price of consumer products, polls shows that President Putin’s popularity in Russia remains very high. According to Sen. Durbin, people support the arguments that “Russia has to stand up to the West” and that the country “should not continually be kicked around.” Consequently, any potential negligent step by the West could be considered a provocation and it could result in unforeseen consequences.

Ultimately, Sen. Durbin underlined that, even if the Ukrainian military possessed all the defense weaponry it desired, Ukraine’s defense forces, consciously diminished by the regime of Viktor Yanukovych, would not be able to counter a full-scale attack by Russia. The senator encouraged the community to continue its efforts to promote further support of Ukraine by the U.S. government.

The meeting was facilitated by the Ukrainian Congress Committee of America, Illinois Division.