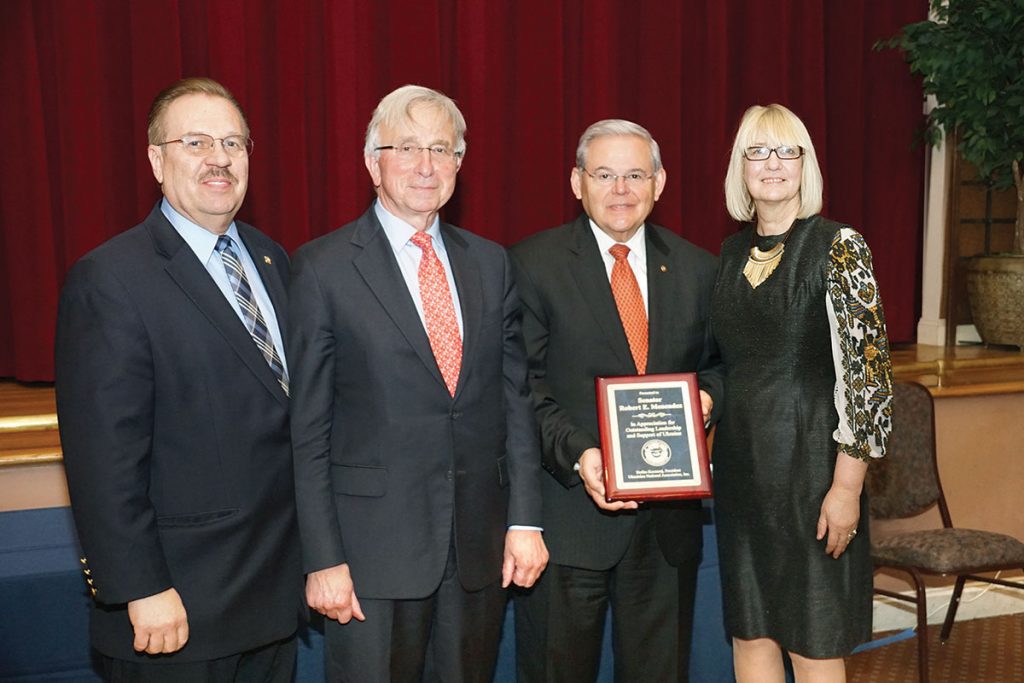 WHIPPANY, N.J. – Hailed as “Ukraine’s dedicated advocate in the Senate” and a “champion for freedom and democracy,” Sen. Robert Menendez (D-N.J.) was honored here on Saturday, May 2, at what was billed as a rally in support of Ukraine.

The New Jersey democrat, sponsor of the Ukrainian Freedom Support Act of 2014, received a plaque from the Ukrainian National Association (UNA) and the Friend of UNIS Award from the Ukrainian Congress Committee of America (UCCA). The UNA also presented the senator with a blue-and-yellow pysanka – the work of folk artist Stephanie Hryckowian.

Organized by the UNA in conjunction with the UCCA, the midday event at the Ukrainian American Cultural Center of New Jersey featured a keynote address by Mr. Menendez, the state’s senior U.S. senator, who said his analysis of the situation in Ukraine is this: “There are many experts who would contend that the complexity of the geopolitics that led to the U.S.’s retreat from Europe created an opening for [Vladimir] Putin in Ukraine.” He added, “We all want a diplomatic solution, but I believe that this can only happen when Putin believes that the cost of continuing to ravage Ukraine is simply too high.”

The public meeting was opened and emceed by Yuriy Symczyk, the UNA’s fraternal coordinator, who noted: “Right now… there are Russian troops on Ukrainian soil. There is war in eastern Ukraine. Every day there are weapons and Russian terrorists crossing the border into Ukraine. Innocent people are dying. We are gathered here today as a sign of unity and to show our support for Ukraine.”

Mr. Symczyk introduced Sen. Menendez by pointing out: “How fortunate we are that he was appointed chair of the Senate Foreign Relations Committee in 2013. His leadership role directly resulted in the Senate adopting such a supportive role of Ukraine. It was he, along with Sen. [Bob] Corker [R-Tenn.] who introduced the Freedom Support Act for Ukraine. Without his leadership, our community’s voices may not have been heard.”

Sen. Menendez spoke of the “ongoing crisis in Ukraine” and underscored that “the United States must take the lead.” He explained: “The administration should fully implement measures in the Ukraine Freedom Support Act, which the president signed into law on December 18. The legislation passed – with unanimous consent – in both houses of Congress. It authorizes the president to provide much-needed military and humanitarian aid to Ukraine. And it imposes additional sanctions against Russia.”

The senator went on to say that when he was in Ukraine last year, “I called the Russian troops in Ukraine what it is: an invasion. I called for implementation of the Ukraine Freedom Support Act” – legislation that he said “was necessary in December and is even more necessary now, in May.” Stating that “we need to ensure that we do all we can for the future of Ukraine,” he pledged, “So long as I am in the Senate, I will not rest until the last Russian boots leave Ukraine.” (Extended excerpts of the senator’s address appear on page 6 of this issue.)

UCCA President Tamara Olexy stated that Sen. Menendez’s “leadership and support over the last year and a half – during this most difficult time for our homeland, Ukraine – has been invaluable,” and presented him with the Friend of UNIS Award. The Ukrainian National Information Service (UNIS) is the Washington office of the UCCA, and the UNIS award is bestowed on those who have played a role in helping to achieve and sustain Ukraine’s independence and in promoting U.S.-Ukraine relations.

Turning to Sen. Menendez, Ms. Olexy noted: “You have understood from the start that the international community, and especially the United States, cannot remain passive in the face of Russian aggression in Ukraine, for remaining passive will only invite further aggression. Your words and promises to our community have always been followed up by deeds. You have led and continue to lead congressional efforts to penalize Russia for its invasion and illegal occupation of Crimea, and for its support of terrorists in eastern Ukraine.”

“The Ukrainian American community,” Ms. Olexy continued, “sincerely thanks you for all of your efforts and stands with you in the belief that the United States must prevail in defending the rights of Ukraine and other nations in the region to live free of unwanted outside involvement, to protect their sovereignty and independence.