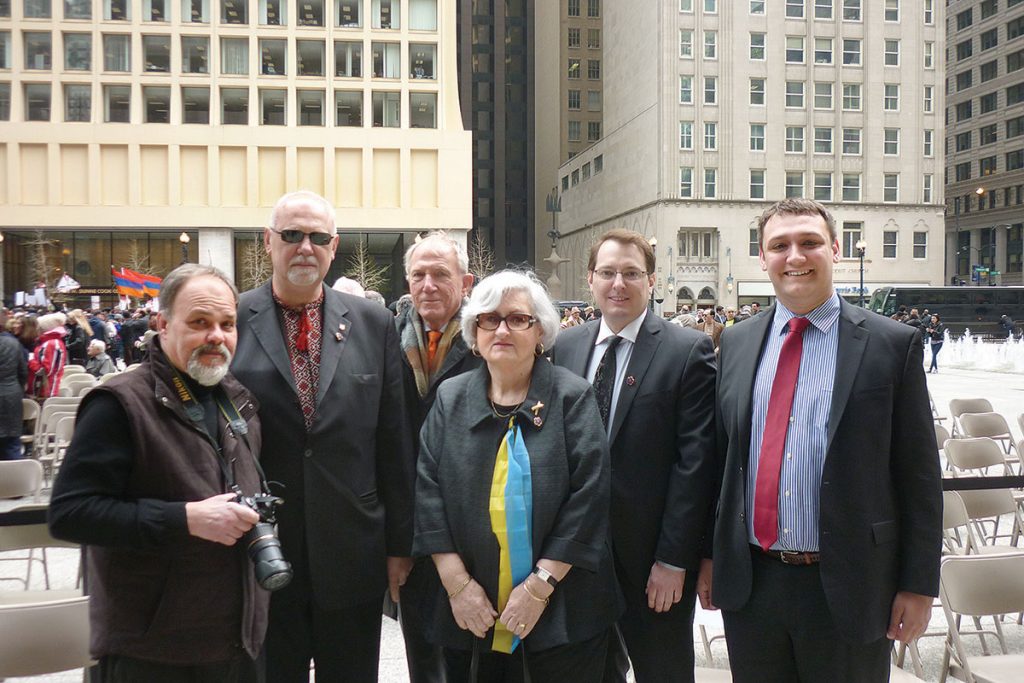 CHICAGO – On Friday, April 24, members of the Suburban Council of Ukrainian Voters-Illinois, Ukrainian Genocide Famine Foundation-USA and Ukrainian Congress Committee of America-Illinois Division gathered with Armenians, Greeks and Assyrians in Chicago to commemorate the 100th anniversary of the Armenian Genocide.

The Commemorative Rally and Memorial March was organized in remembrance of the 1.5 million victims that perished by the brutal hand of Ottoman Turks beginning in 1915. What was their crime? They were self-sufficient Christians in a land whose rule was hostile to their beliefs. Their punishment was starvation, torture and deportation. Over 500,000 Armenians were forcibly displaced. The ultimate goal was to exterminate the Ottoman Armenians.

To this day, the Turkish government refuses to recognize the Armenian Genocide and denounces those who do recognize the mass killings as an act of genocide.

Members of the Ukrainian community said they were honored to have been able to join and support the Armenian, Greek and Assyrian communities on Armenian Genocide Remembrance Day. They noted that Ukrainians know well what it is like to carry the deep and painful scars of genocide, as the Holodomor engineered by Stalin in 1932-1933 murdered millions of people in Ukraine.

The memorial program included remarks by politicians who serve on the Congressional Ukrainian Caucus and Armenian Caucus: Reps. Danny Davis (D-Ill.), Bob Dold (R-Ill.), Mike Quigley (D-Ill.) and Dan Lipinski (D-Ill.), as well as Sen. Richard Durbin (D-Ill.), co-chair of the Senate Ukraine Caucus. All expressed their readiness to continue to raise awareness of issues of interest to the communities they represent. The Office of Sen. Mark Kirk presented a written expression of support and commitment.