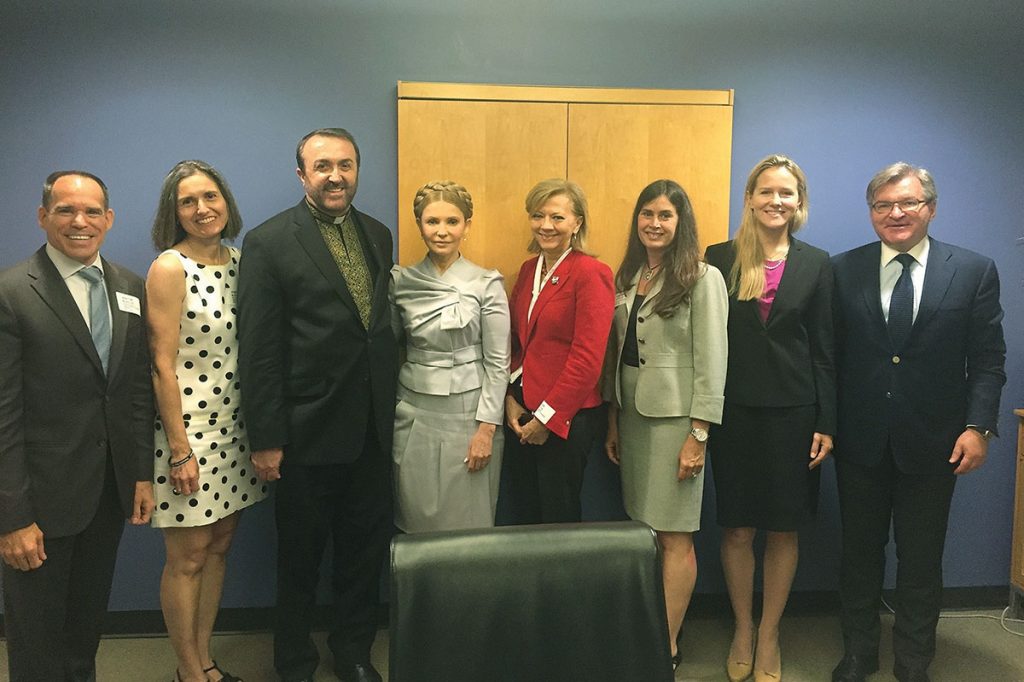 WASHINGTON – Members of the Ukrainian Congress Committee of America met on June 3 with Yulia Tymoshenko, Ukraine’s former prime minister. Ms. Tymoshenko, who was in Washington for meetings with members of Congress and government officials, asked to meet with the UCCA to discuss ways in which the Ukrainian diaspora can continue assisting Ukraine.

According to Ms. Tymoshenko, the three issues highlighted during all of her meetings on Capitol Hill were military, economic and humanitarian assistance for Ukraine.

The primary purpose of Ms. Tymoshenko’s visit was to expound upon the fact that the Minsk II ceasefire agreement has not been honored by Russia, and therefore is utterly ineffective. According to Ms. Tymoshenko, the so-called ceasefire was implemented to “neutralize the support” that Ukraine was receiving from the West for defensive weapons, to neutralize the EU’s implementation of continued sanctions against the Russian Federation, and to neutralize Ukraine’s advances in securing its territorial integrity, all of which were advancing prior to the signing of the Minsk II ceasefire agreement in February.

Ms. Tymoshenko said she believes that the only way Ukraine will be able to maintain its territorial integrity is if the West, in particular the United States, provides defensive military equipment. In her words, “strength deters and weakness provokes.” However, Ms. Tymoshenko underscored that, if provided, the equipment must be specific and sufficient to actually help deter the Russian Federation from continuing its assault on Ukraine.

When asked her opinion regarding Russia’s illegal occupation of Crimea, Ms. Tymoshenko confessed that although she feels Crimea would probably not return to Ukraine until either the Putin regime was out of power or forcibly ousted, she is pleased that the international community does not recognize Russia’s illegal annexation.

Her second point of discussion was the rapidly deteriorating economic situation in Ukraine. The devaluation of the hryvnia, as well as the high rate of inflation are just two of the main factors responsible for Ukraine’s current economic decline. She also offered some insight on how to reform Ukraine’s economy and put the country on a sustainable path of growth.

One of her biggest concerns for Ukraine’s economic future is the rigorous requirements, or what Ms. Tymoshenko referred to as “shock therapy,” placed upon Ukraine by the International Monetary Fund. She pointed out that these austerity measures were not only making the lives of regular Ukrainians worse, but were potentially sowing the seeds of dissent.

Shaking public confidence can be especially harmful, particularly during the current war, as it can generate strife on an internal level at a time when unity is of the utmost importance, Ms. Tymoshenko said, adding that President Putin was waiting for internal dissent to take hold, as it could allow him and his proxies to further destabilize Ukraine.

The third and most crucial point that Ms. Tymoshenko stressed was the ongoing humanitarian crisis that Ukraine now faces. As a result of the ongoing war, there are currently over 1.3 million internally displaced persons in Ukraine, who, according to Ms. Tymoshenko, are in desperate need of basic humanitarian assistance, including food, medicine and housing.

Ms. Tymoshenko thanked the Ukrainian Americans for their unrelenting support and urged the communty to continue advocating for U.S. assistance to Ukraine.