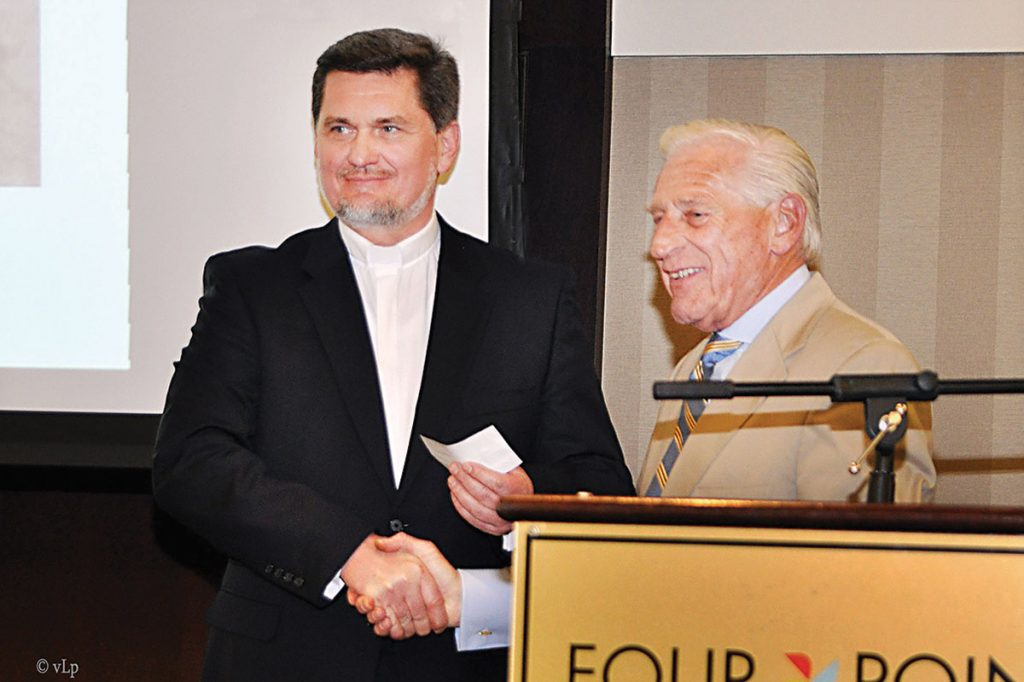 Vsevolod Petriv
The Rev. Dr. Yaroslav Nalysnyk, pastor of Christ the King Ukrainian Catholic Church in Boston, receives a check from Walter Boyko, president of the Ukrainian American Heritage Foundation of Boston, for $125,000 for the parish.

BOSTON – After extensive consultations early this spring, the executive officers and the board of directors of the Ukrainian American Heritage Foundation of Boston, acting in accordance with its charter and by-laws, voted to curtail the 95-year-old organization’s activities and to distribute the bulk of its assets between the two Ukrainian churches in the city.

The move came after a multi-year effort by most of greater Boston’s Ukrainian American cultural, educational, social and youth organizations to develop a center that could serve the entire community as a focal point for the myriad activities that occur during the year. Although a building and land had been bought in Dedham, Mass., an immediate suburb of Boston, and plans for a center were drawn up, enthusiasm and serious support never materialized and the site was sold at a loss.

As a result, at the joint pascal meal (Sviachene) of Christ the King Ukrainian Catholic Parish and St. Andrew Ukrainian Orthodox Parish of Boston which was held on Sunday, April 26, Walter Boyko, president of the Ukrainian American Heritage Foundation (UAHF) presented the Very Rev. Roman Tarnavsky, pastor of St. Andrew’s, with a check for $125,000 for his parish.

Immediately after the presentation of the check, Metropolitan Antony of the Ukrainian Orthodox Church of the U.S.A. unveiled and dedicated a plaque honoring the members of the UAHF and its predecessor, the Ukrainian American Educational Citizens’ Club of Mattapan, for their many years of service to the greater Boston Ukrainian American community in general and to St. Andrew’s Parish in particular.

Metropolitan Antony had been in Woonsocket, R.I., on Saturday, April 25, for the rededication of St. Michael Ukrainian Orthodox Church, which had almost been destroyed in a fire the previous year, and had come to Boston to participate in the Sviachene.

On the following Sunday, May 3, Mr. Boyko presented the Very Rev. Doctor Yaroslav Nalysnyk, pastor of Christ the King, with a check, also for $125,000, for his parish. The presentation was made during the course of a banquet honoring Father Nalysnyk on the occasion of the 25th anniversary of his ordination and followed the celebration of a pontifical divine liturgy by Bishop Paul Chomnycky, eparch of Stamford, Conn.

Although neither parish has announced how it intends to use its gift, each has indicated that the money will go toward capital improvements and various restoration projects, which are badly needed after the brutal winter that Boston experienced this past year.

The Ukrainian American Educational Citizens’ Club was founded in 1920 by Wasyl Chepyha, Fred Kostecki, Joseph Swidzinski, Steven Suchecki, Stanley Fedirka and Michael Melnyk in Mattapan which, at the time, was an almost rural section of Boston where many Ukrainians were beginning to settle. Their decision was astute, because within a short time more than 700 Ukrainian families had settled in the area. At the time of their settlement there were no Ukrainian organizations in the area and the only alternative for these Ukrainians was the Ukrainian church located in the center of the city and more than an hour and a half away by public transportation at the time.

The purpose of the club was to serve the needs of the entire community. It was to foster Ukrainian culture and dance; teach English to the newly arrived Ukrainian immigrants from Europe and help them become citizens; teach Ukrainian to their children, both those born in Ukraine and those born in the United States; and maintain a library of Ukrainian and American books and literature so that they could easily assimilate into their adopted country.

Within a few months, the founding members purchased a large plot of land on Cummins Highway, which was one of the main thoroughfares in Mattapan, and then dug and laid the foundation themselves by hand. They then constructed a basement and an upper hall with a stage and a number of rooms in the back, and finally laid out a parking lot. At first, the hall was called the Ukrainian Home, but over time it also came to be known as Oakland Hall to the non-Ukrainians in the area who also used it.

Many Ukrainian families in Mattapan built their homes the same way. They bought plots of land and on Friday nights came out from the center of the city, where most Ukrainians lived, and then camped out until Sunday late in the day while they painstakingly dug their foundations and laboriously built up their houses. Future neighbors helped each other, and there were times that as many as 20 to 30 people would be working on one site.

The goal of the founding members was to provide a place for the local Ukrainians to come together to socialize; to celebrate the various holidays and holy days; to hold dinners and special programs; to maintain a Ukrainian school where culture, history and language would be taught to children, grandchildren and great-grandchildren; and in general, to see to it that their rich Ukrainian heritage and traditions were passed on.

In the mid to late 1930s the school flourished and had more than several hundred students. Vasyl Avramenko came and taught Ukrainian folk dance, and in the early 1940s there was an all-male chorus, the Kobzars, that made several recordings and was the only chorus chosen to sing at the Boston mayor’s inaugural in 1950.

The Ukrainian Home also developed a reputation for all of the political rallies that were held there, and for a good number of years it was expected that the major candidates for Boston City Council, mayor, as well as governor of the commonwealth of Massachusetts would make appearances there. Several members of the Kennedy family appeared in the early years of the clan’s rise to power.

In the late 1960s a new men’s chorus was formed, boasting some 30 members. The chorus gave regular concerts not only at the hall but throughout greater Boston. At the same time, great emphasis was put on attracting and keeping the youth of the post-war generation. Regular dances were held and some of the best Ukrainian bands in North America, including Syny Stepiv and Vodohrai, came to perform. Between 500 and 600 young people would regularly turn out for these events.

Throughout the 1970s the ethnic composition of Mattapan rapidly changed. Membership dwindled, and fewer and fewer functions were held at the Ukrainian Home. Finally, in 1984, the Ukrainian Home was sold and was converted into an Abyssinian Orthodox Church.

For almost three years the Ukrainian American Educational Citizens’ Club held occasional functions in St. Andrew Ukrainian Orthodox Church hall and then in 1987 it purchased a home in Needham, Mass., a suburb west of Boston. The building was suitable for members’ meetings and small gatherings, but was not a function hall and could not serve the wider Ukrainian American community. The building was sold in 1992.

For the next eight years the club again resorted to holding its meetings and occasional functions in St. Andrew’s hall. Finally, in 2000 the membership and board of directors voted to form a new non-profit, the Ukrainian American Heritage Foundation Inc. of Boston.

As in 1920, the membership wanted the new non-profit to continue to support the advancement of the Ukrainian heritage in the greater Boston area and stipulated that its mission was to support, financially and morally, cultural activities for youth of Ukrainian descent and to administer stipends in connection with these programs; to support Ukrainian American heritage studies; to grant scholarship assistance to worthy college students of Ukrainian American descent; to allocate grants and donations to charitable organizations that promote Ukrainian culture and/or educational activities; in general, to foster such cultural, educational and artistic endeavors that contribute to an appreciation of Ukrainian heritage among the public at large, as well as among Americans of Ukrainian descent; and, finally, to provide moral, and when possible, financial support to the country of Ukraine and its population for such charitable needs as the victims of the nuclear disaster in Chornobyl, the refugees from Donetsk and Luhansk, the wounded soldiers from the fighting in Ukraine’s east, children’s hospitals, orphans and needy students.

The membership also saw the need for a new center for the greater Boston Ukrainian community to act as a hub and magnet. It partnered with a number of other Ukrainian American organizations in an effort to make that vision a reality, but after 15 years had not achieved that goal. At the same time, the membership realized that the younger generations of Ukrainian Americans in greater Boston, including the more than 70 who had received scholarships, were not particularly interested in joining the Ukrainian American Heritage Foundation and the same proved true for the new young people coming from Ukraine.

After looking at all of the variables, it was decided to use the bulk of the foundation’s assets to support the two Ukrainian institutions in Boston that have a mission similar to its own.

And, although this action is a great help to the two Ukrainian churches in Boston, observers say it is unfortunately still a tragedy for the Ukrainian American community of the region, which now numbers more than 80,000 people and really does need a world-class facility where it could showcase Ukrainian culture and arts; where it could preserve and hand down Ukrainian language and traditions to coming generations; and where it could interface with non-Ukrainian power brokers, community leaders and politicians not only for the benefit of the local and national communities but for the benefit of Ukraine itself.