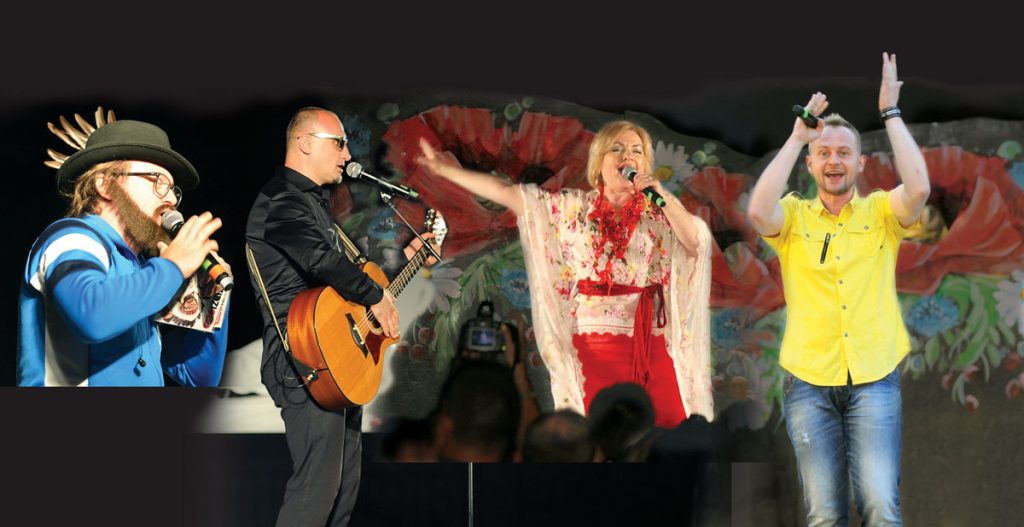 KERHONKSON, N.Y. – Approximately 6,000 people attended the ninth annual Ukrainian Cultural Festival under the theme “Solidarity with Ukraine” during a beautiful summer weekend on July 10-12 at the Soyuzivka Heritage Center.

That spirit of solidarity could be seen all around the Soyuzivka grounds, not only the stage show, but among the vendors, the delicious food, the exhibits and film screenings, with the sounds of “Glory to Ukraine, Glory to the Heroes” echoing throughout the festival.

The schedule of events offered festival-goers a variety of things to enjoy.

Friday’s evening stage show got under way promptly at 6 p.m. with emcee Marta Czurylowicz, a Canadian television journalist. Two top-notch dance groups shared the festival stage: the Roma Pryma Bohachevsky Ukrainian Dance Workshop and the Lehenda Ukrainian Dance Company from Australia (which had just wrapped up a multi-city tour in the U.S. and Canada).

The workshop dancers (based during a two-week camp at Soyuzivka) are under the direction of Orlando Pagan, artistic director, Anya Bohachevsky-Lonkevych, and Larissa Pagan, assistant director.

Based in Melbourne, Australia, and under the direction of Melanie Moravski Dechnicz, the Lehenda Ukrainian Dance Company includes 50 dancers (all of whom paid their own way for the tour). A CD, “Kazka,” is available for sale of their music, produced by Nicholas Buc and the Macedonian Radio Symphony Orchestra. The ambitious troupe was formed just 16 months ago and demonstrated high talent in its selections.

Patrons listened to a presentation on the war in Ukraine, the wounded veterans from the war and how the diaspora can help. The gala was well received by attendees, with many remaining late into the night. The donations collected are designated for humanitarian needs of Ukraine, in support of the establishment of a rehabilitation center for the victims of the war. The center will be named in honor of Markian Paslawsky, a West Point graduate who died during fighting in Ukraine.

Following the conclusion of Friday’s stage show, the evening’s dance (zabava), with music by Svitanok of New York, kept the festival atmosphere going well into the early morning hours.

Saturday afternoon’s concert was opened by the singing of the Ukrainian and U.S. and Canadian national anthems by Swiatoslawa Kaczaraj, who was joined by members of the Ukrainian American Veterans, who formed a color guard. Performers included Olya Fryz, a recording vocalist with a recent children’s album release; the Korinya folk ensemble of New York, who were named National Artists of Ukraine in 2012 after winning first place at the Boyko Festival; rising star vocalist Anya Kosachevich, who debuted at the 2014 Soyuzivka festival’s Young Artists Concert; a first-timer to the Soyuzivka stage, vocalist Yulia Busko, who was runner-up in the 2015 Chervona Ruta Music Festival. The three-piece Udech musical collective demonstrated its wide repertoire of Ukrainian folk music; and the Women’s Bandurist Ensemble of Connecticut, under the direction of Irene Kytasty Kuzma, enchanted listeners with its musicianship.

Also returning to the Saturday afternoon stage were the Roma Pryma Bohachevsky Ukrainian Dance Workshop and the Lehenda Ukrainian Dance Company, as well as Mr. Popadiuk.

It was a beautiful day to take a swim in the pool, or enjoy a beverage on the Tiki deck or on the Veselka patio, where the Zabava band from New York entertained the crowds in preparation for the varenyky-eating contest.

Late on Saturday afternoon, Yuriy Zakalyuzhnyy, a resident of Philadelphia who hails from Lviv, was proclaimed the 2015 varenyky-eating contest winner. Alex Gutmacher, who has been running this contest, as well as professional eating contests for many years, hosted this lively and well-attended event.

Facing a tough board of 11 competitors (including Trevor from Jamaica), it was unclear in the first round who was the winner, so a play-off final round was held between Vitali from Boston (the second-place winner) and Mr. Zakalyuzhnyy.

After the first round, competitors were asked how they felt after downing 25 varenyky, with many saying they felt fine, some wanting a beer, some still hungry, while others saying that they could not eat another bite.

The champion for 2014, Paul Czerepacha, 70, from Connecticut, also competed, but came in third place this year.

Saturday night’s concert was co-emceed by Foma of the band Mandry, who also lent his talents for the show, and Ms. Czurylowicz.

Returning to the stage were the Roma Pryma Bohachevsky Ukrainian Dance Workshop, the Lehenda Ukrainian Dance Company, the Dumka Chorus and the Cheres ensemble, Mr. Popadiuk, Foma and the Women’s Bandurist Ensemble.

Dzidzio’s feature performance was very popular with the audience. Mr. Tabakov was joined by Volodymyr Voznyak for a variety of selections. Also from Ukraine, Oksana Bilozir brought her pop music sound that appealed to all ages.

The zabava on Saturday night featured music by Svitanok, which fueled the crowd in dancing up a storm.

Throughout the weekend, vendors showcased a wide selection of beadwork, embroidery, music recordings and artwork. The many organizations, credit unions and activists groups working for the diaspora community, as well as assisting Ukraine during this difficult time, also set up information booths.

Natalia Pavlenko and Yuri Mishchenko were joined by artist Halyna Nazarenko in promoting the exhibit “Petrykivka: The Soul of Ukraine. Ukraine’s UNESCO Treasure.” The booth featured works from private collections and is on display at The Ukrainian Museum with more dates in the future planned throughout the United States.

The food selections available at the festival had something for everyone. Items included Ukrainian traditional fare such as borshch, varenyky, holubtsi, shashlyky, but also standard items such as hamburgers, fried chicken and corn on the cob.

Also on Saturday afternoon, Ukrainian films were screened in the Veselka hall, including films by contemporary filmmakers from Ukraine.

A Ukrainian village, or “selo,” was recreated near the Main House, providing visitors a taste of village life in Ukraine.  Live demonstrations included pottery, pysanky, gerdany, embroidery, wool spinning/weaving, motanky (traditional cloth dolls), and other active aspects, all under the coordination of Halyna Shepko of Shawangunk Ridge Farm.

Organizers have called this year’s festival “a record-breaking success” and we are looking forward to next year for the 10th anniversary Ukrainian Cultural Festival at Soyzuzivka.