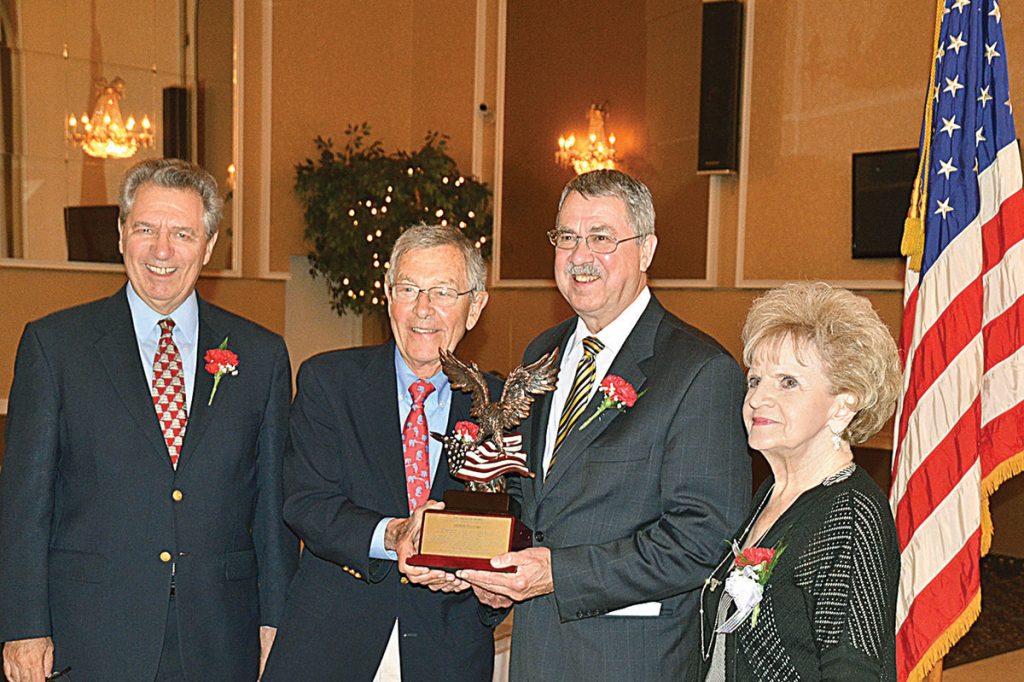 CLEVELAND – On July 16, at the annual Captive Nations Dinner in Cleveland, the American Nationalities Movement bestowed its Freedom Award on Andrew Fedynsky citing his “magnificent lifetime achievements: …talent as a scribe publishing outstanding articles supporting human rights for freedom loving people” and “exceptional sensitivity and efforts supporting his rich Ukrainian heritage as director of the Ukrainian Museum-Archives (UMA) and for support of the goals of the Nationalities Movement.”

George Voinovich, a retired U.S. senator who was also two-term governor of Ohio, presented Mr. Fedynsky with the award. In his remarks, Sen. Voinovich related how, as mayor of Cleveland in the 1980s, he and his staff had worked closely with Mr. Fedynsky when he was senior legislative assistant to Cleveland Congresswoman Mary Rose Oakar. He praised Mr. Fedynsky for his creative work bringing millions of federal dollars during a time when the city was undergoing severe economic difficulties.

The senator also noted Mr. Fedynsky’s numerous initiatives on behalf of Ukraine and other oppressed peoples when he worked in the U.S. House of Representatives and prior to that as a legislative assistant to Sen. Bob Dole.

In his own remarks, Mr. Fedynsky thanked the American Nationalities Movement for the honor noting that it was not his alone to enjoy. He noted that previous generations at the UMA had assembled a world-class collection of rare publications and memorabilia which the government of Ukraine is now interested in having the UMA digitize. Today, Mr. Fedynsky said, the UMA depends on the efforts of dozens of volunteers and friends and contributions from hundreds of individuals. He acknowledged the presence of three tables full of Ukrainian American friends and fellow activists who attended the dinner.

Mr. Fedynsky also provided perspective on the Captive Nations movement, which goes back to the late 1950s, noting how it confronted the Soviet Union at its most vulnerable point. It’s no accident, he said, that the Soviet Union fragmented along its historic fault lines.

Closer to home, he noted the many political leaders whose careers were launched and sustained with the support of the American Nationalities Movement, including Sen. Voinovich and Rep. Oakar.

Echoing the words of his fellow-honoree, Latvian American leader Maris Mantenieks, Mr. Fedynsky underscored that the work of the Captive Nations movement must continue in light of Russia’s ongoing aggression in Ukraine and its provocative actions targeted against the Baltic states, Scandinavia and other NATO countries, including the United States.

[Editor’s note: Readers of The Ukrainian Weekly know Mr. Fedynsky as a long-time columnist of this newspaper.]