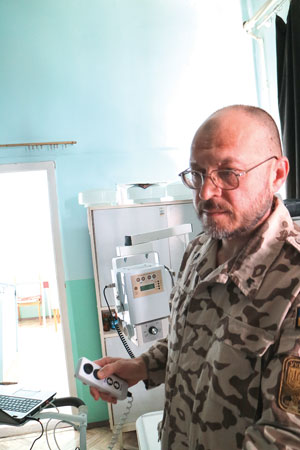 Ukrainian Weekly Editor | The Ukrainian Weekly | Subscription
Grigory Maximets, a medic with the Aidar volunteer battalion, became the first to inform the public about two captured Russian reconnaissance officers in a post on his Facebook page on May 17.

Special to The Ukrainian Weekly

SHCHASTIA, Ukraine – Grigory Maximets, a medic of the Aidar volunteer battalion of the armed forces of Ukraine, was the first to inform the public about the capture of two Russian reconnaissance officers on May 16 in Shchastia, a town near the conflict line in the Luhansk Oblast.

When being examined by Mr. Maximets, the soldiers revealed themselves to be Yevgeny Yerofeyev and Aleksandr Aleksandrov from the 3rd Special Forces Brigade of the Main Reconnaissance Administration of the Russian Joint Staff, based in the city of Tolyatti in central Russia.

After Mr. Maximets took their x-rays, Ukrainian military officers questioned the soldiers and released video on the Internet on May 17 to confirm the activity of Russian military on Ukrainian territory. Capt. Yerofeyev and Sgt. Aleksandrov said their battalion of 200 soldiers arrived in Ukraine on March 26 and was based in Luhansk, a city with a pre-war population of 424,000 that is occupied by the Russian-backed terrorists.

In response to their claims, the Russian government said both soldiers were dismissed from service, which they denied was the case. Meanwhile, Sgt. Aleksandrov’s wife told Russian television she didn’t know where her husband was, even after he was shown on television as a prisoner being held in Kyiv.

Since their capture, both men have been charged with terrorism-related crimes. One is in a Kyiv hospital, while the other is incarcerated in pre-trial detention, Vitalii Naida, the head of the counter-reconnaissance department of the Security Service of Ukraine (SBU), said on June 17.

In an interview conducted in late May in Shchastia, Mr. Maximets told The Ukrainian Weekly why he decided to publish the photos and news about the soldiers’ capture on his Facebook page on the afternoon of May 17, hours before the video of their questioning was released, without consulting with officers of the armed forces of Ukraine.

Under constant bombardment by the Russian-backed terrorists, the Ukrainian forces based in Shchastia – a town with a pre-war population of about 13,000 – engage in daily gun fights with their reconnaissance and sabotage units. In one of many morbidly ironic aspects of the war, Shchastia means “good fortune” in Ukrainian.

(The interview was conducted by Yana Sedova, who also translated it into English; the text was edited by Zenon Zawada.)

How did you find out that two Russian soldiers were captured in Shchastia?

For many months, I had been working in the local hospital with a group of medics of the Aidar battalion. This happened on the afternoon of May 16. A Ukrainian soldier, Vadym Pugachev of the 92nd Brigade of the Ukrainian armed forces, was brought to the city hospital. Pugachev was in a coma. We attempted resuscitation, but after 30 minutes we had to report that he died from six bullet wounds. Right after we reported his death, two more wounded soldiers were brought to the hospital.

At first I didn’t even know that they were Russian soldiers. I was working as a radiologist and saw the first guy, Yevgeny Yerofeyev. The main bone of his upper right arm was broken. We have to record all the patients, which is why I asked his name. He answered and added that he was a soldier of the Russian Special Forces. He also said that their military unit was based in Tolyatti and that he lives in Samara, which is close by. Yerofeyev also said their military subunit came to Luhansk in March.

On that day, he said the troops of their unit came to Shchastia in order to confirm whether Aidar left the thermoelectric power station that it was supposed to be guarding. Their mission was to check this information. Truly, it was the boys from the 92nd Brigade, also based in Shchastia, who waged a battle with Russians and captured them. Vadym Pugachev was among them. The Aidar guys heard the shooting and joined the group from the 92nd Brigade, who had already captured Yerofeyev. It was Yerofeyev who told them there was one more wounded Russian. The Ukrainians started to look for the second wounded man and found Aleksandrov, not far from where the battle took place.

Why did Yerofeyev decide to tell you his story?

As far as I understood, after their capture the Russians started to shout that they are Russian soldiers because they didn’t want to be shot dead right there, right at that moment.

So if someone discloses that he is a Russian soldier, does that guarantee him life?

I do not know, but they presented themselves as being from the special forces brigade of the reconnaissance division. Not mercenaries, not fighters.

What did they say when you provided them with first aid?

They were in shock from severe bullet wounds. Yerofeyev’s main bone was broken; Aleksandr Aleksandrov, whom I later took to the operating room, had a broken left femur. I didn’t have time for chatting with them. I just performed x-rays, and they were taken away. When we took them to the surgery room, they asked not to be anesthesized. The reaction of all Russian soldiers is similar regarding this surgery. They literally ask the same question, “You won’t cut something from my body, will you?”

I wondered why they say so and who told them that we would cut their organs. They all answer the same: that Russian commanders said Ukrainian medics from the so-called punitive battalions normally cut out internal organs. The separatists call the soldiers from the volunteer battalions “punishers.”

Did you ever meet Russian captives before?

I first met a few of them last year at the end of August, when we were leaving the Luhansk airport. We put several Russians in our medic car and removed them from being surrounded. I know for sure that there was one paratrooper. When we were in a safe place, the Security Service of Ukraine took these Russians, and I never saw them or heard about them again.

In the winter here in Shchastia, I also saw two Russian captives, one of whom had shrapnel wounds to his chest. He had a collapsed lung but was conscious. We provided him with first aid, but when we put him on a table in the operating room and the anesthesiologist came, the Russian guy asked, “Will you cut something out of me?”

So yes, I had seen Russian captives before. I check the news on the Internet all the time, but never saw news about them, though I think we must shout about each case because they are real proof of the presence of Russian soldiers in Ukraine.

Did you see just a few Russian captives, or were there many of them during the last year in the Anti-Terrorist Operation (ATO) zone?

I personally saw four of them. I often speak with Russian citizens via social networks. They seem reasonable, but keep saying, “Where did you see Russian troops in Ukraine? Prove it!” In my view, we must show them. I heard that last year a few Russian paratroopers were captured. [Editor’s note: Captured in August in the Donetsk Oblast, the Russian soldiers claimed they were lost and had no idea that they had entered Ukrainian territory.] Then our President Petro Poroshenko showed their passports when going abroad. [Editor’s note – Mr. Poroshenko displayed these items when attending a meeting in Munich in February.]

But usually, I think that Russian captives are quietly exchanged for Ukrainian captives that are held on the separatists’ side. Well, that’s important, but we must also create some publicity as well.

Did you see the passports of Russian captives?

When you revealed this information, how did the command of the Ukrainian military forces react?

I took a few photos of Russians because we repaired Aleksandrov’s leg with special equipment. [Editor’s note: A “fiksator” is a type of metal leg brace with six clamps to keep a bone in place.] This expensive equipment was bought by volunteers, and we had to report its use. Aleksandrov left our hospital with that equipment on his leg. First, I offered to my colleagues that we publish this information together, but they said it was useless and nothing would change, and refused. That is why I did it alone.

After my publication, I received a phone call from the 112 television channel. They asked me to comment. I was on the air and heard how they said that Aidar soldiers had captured the Russians. My first reaction was to correct this information, because this wasn’t true. However, I didn’t know if I could reveal that the soldiers of the 92nd Brigade really did it. It could have been a secret. That is why at the beginning, everybody thought that Aidar captured the Russians.

Later in the evening, a few guys from the 92nd Brigade approached me. They were angry and asked why I said Aidar captured the Russian troops. I said I never claimed anything like that – neither in my Facebook post nor later on the air. Their commander, with the code name Snake, asked me to post on my Facebook page that it was soldiers from the 92nd Brigade that captured the Russians. I did that.

Did you think that Ukrainian commanders could punish you for your publication of this information? Did you actually have the right to reveal it?

I think that I didn’t have the authority to do it, but I really wanted people to know about the fact that there are Russian divisions among separatists who are fighting against Ukrainian forces.

Do you think that this information would have been revealed by commanders without your publication?

I do not know, which is why I decided to take the risk and reveal this information. That was some kind of insurance.

Are you satisfied with the result and the fact that this capture became public?

I am quite happy that everything happened in the way it should have happened. I think that we needed this publicity. I am sure that this story will influence many things. I think that these Russians should face a public trial and, afterwards, they should be exchanged for Ukrainian captives. That would be the right scenario, in my mind.