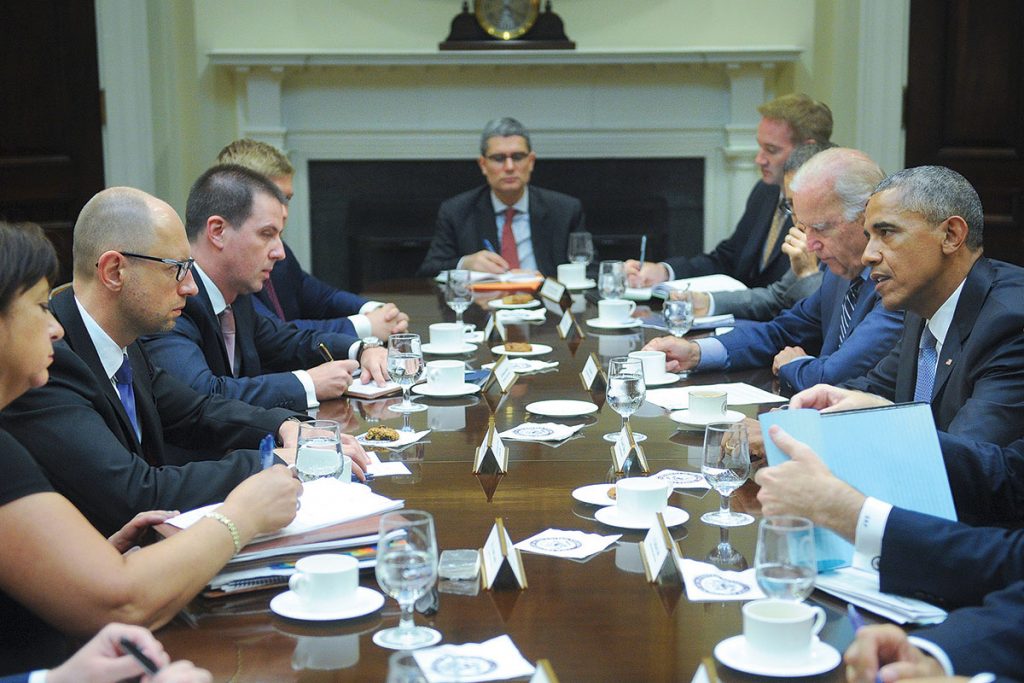 kmu.ua.gov
Prime Minister Arseniy Yatsenyuk and his delegation in discussions at the White House with President Barack Obama, Vice-President Joseph Biden and other U.S. officials.

As noted in a White House statement, the president “dropped by” a meeting at the White House between Vice-President Joseph Biden and the Ukrainian prime minister, both of whom earlier that day participated in the U.S.-Ukraine Business Forum, a large gathering of government officials and business leaders focused on improving Ukraine’s economic situation and its relations with the United States and the West.

According to a statement released after the meeting, the president and vice-president also “underscored the U.S. commitment to maintaining sanctions on Russia until it fully implements its obligations under the Minsk agreements,” which are intended to resolve Ukraine’s conflict with the Russia-backed separatists in Ukraine’s eastern regions. President Obama and Vice-President Biden commended the Ukrainian government for the steps it has taken to implement its obligations under the agreements, including the submission to Ukraine’s Parliament of “draft constitutional amendments on decentralization.”

The American leaders also welcomed the Ukrainian government’s “ambitious economic reform agenda” and its “strong stand against populist measures that could undermine Ukraine’s financial stability” – which were also among the primary issues discussed at the U.S.-Ukraine Business Forum.

“The leaders agreed on the importance of Ukraine passing additional reform measures, including in the energy sector, to fulfill its commitments to the IMF [International Monetary Fund] and other international financial institutions,” the White House said.

The U.S.-Ukraine Business Forum was organized and co-hosted by the U.S. Department of Commerce and the U.S. Chamber of Commerce in its headquarters building, across Lafayette Square from the White House. In addition to Prime Minister Yatsenyuk and Vice-President Biden, the estimated 250 forum participants included high-level government and business leaders from both countries.

On the Ukrainian side, this included Finance Minister Natalie Jaresko, Economic Development and Trade Minister Aivaras Abromavicius, Agrarian Policy and Food Minister Oleksii Pavlenko, Infrastructure Minister Andrii Pyvovarskyi and the chairman of the State Fiscal Service, Roman Nasirov, among others.

The U.S. side was led by the president of the Chamber of Commerce, Tom Donohue, and Secretary of Commerce Penny Pritzker.

After the forum, the U.S.-Ukraine Business Council hosted a reception at the nearby Willard InterContinental Hotel.

Prime Minister Yatsenyuk was also scheduled to meet that day at the State Department with Secretary of State John Kerry. But Mr. Kerry could not return to Washington for that meeting from the still ongoing Iran nuclear talks in Vienna, which finally reached a successful agreement that evening.

Ukraine’s prime minister left Washington for Canada later that evening, while other members of his delegation stayed behind for more meetings and discussions in Washington, including the July 14 signing at the State Department of the Open Skies agreement by Ukrainian Infrastructure Minister Pyvovarskyi and U.S. Undersecretary for Economic Growth, Energy and the Environment Catherine A. Novelli.

The State Department noted that this agreement is designed to strengthen bilateral economic ties and facilitate the growth of civil aviation between the two countries. “It is an example of the strong bonds of friendship and cooperation between our two countries.”

The United States says it now has more than 115 such Open Skies agreements worldwide.

Prime Minister Yatsenyuk – accompanied by Finance Minister Jaresko – last visited Washington a month ago for three days of talks with U.S. government officials, congressional leaders and the IMF, as well as a White House meeting with Vice-President Biden.