Poroshenko grants Ukrainian citizenship to Ulana and Marko Suprun of the U.S. 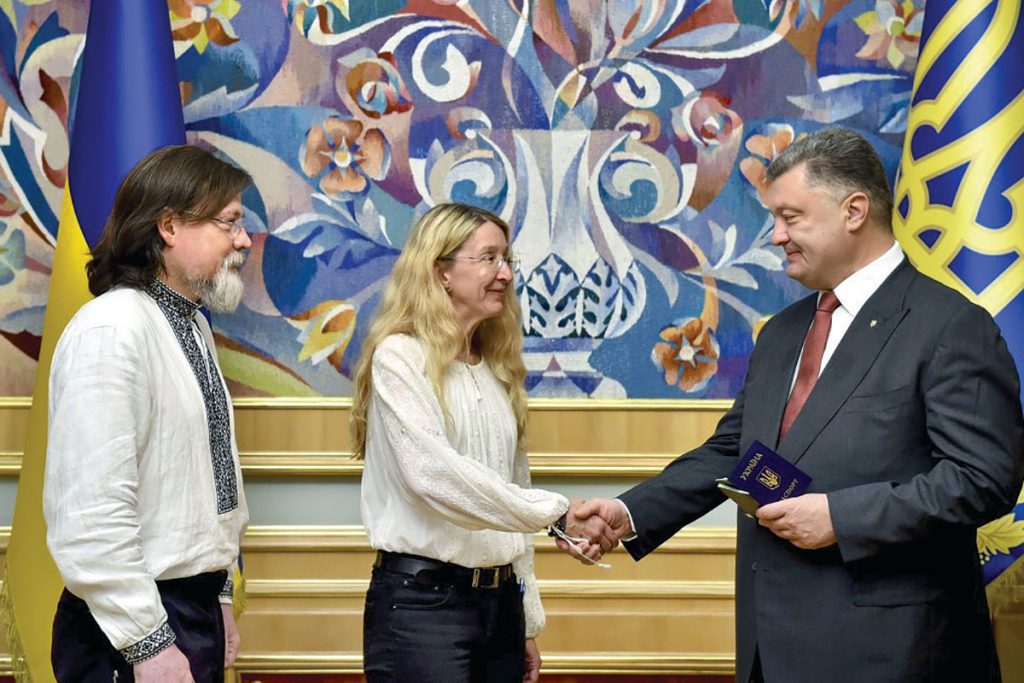 ‘Your efforts saved thousands of lives,’ the president notes

KYIV – President Petro Poroshenko signed decrees granting Ukrainian citizenship to Dr. Ulana Suprun and Marko Suprun. At the meeting, the president expressed appreciation to the Supruns for their sincere support and assistance to Ukraine when the country really needs them. The head of state presented passports of Ukrainian citizens to the couple.

According to the July 11 decree, it is in the state’s interest to grant citizenship of Ukraine to Ulana and Marko Suprun.

The president emphasized that the Supruns have made a great contribution to providing Ukrainian military officers with the international-level individual first aid kits and a tactical medicine training program. “Your efforts saved thousands of lives,” Mr. Poroshenko said.

The president also noted Dr. Suprun’s and Mr. Suprun’s participation in the training program for the new Ukrainian Police Patrol Service. Mr. Poroshenko said that, thanks to such knowledge, new police officers have already saved a human life.

The president emphasized the critical role of volunteers in providing Ukraine’s armed forces with what they need. “Ukraine is lucky to have such a unique phenomenon as the volunteer movement,” he said. “The Ukrainian armed forces were revived this year, and your efforts also added value to this revival,” he told the couple.

Mr. Suprun recalled meeting with the president amid unfolding events of the Maidan. “I remember December 1 [2013] when the Maidan events were emerging on Bankova Street and we fought for the common goal of protecting the protesters. Then, the distance between us was around five to 10 meters. I realized then that we have to be close and stay side by side with you to develop a new country,” Mr. Suprun said.

Dr. Suprun presented President Poroshenko with an individual first aid kit (IFAK) – the same kit is saving the lives of Ukrainian soldiers in the Donbas. She invited him to take the tactical medicine training program’s course for fighters and rescuers.

The Supruns, founders of the Protection of Patriots Volunteer Project, moved to Ukraine a week after the beginning of the Revolution of Dignity. Dr. Suprun, a physician, joined the medical service as a volunteer and was at the Maidan during the most difficult of times. The Supruns are active members of the Ukrainian World Congress, an international NGO uniting the Ukrainian diaspora around the world.

Since the early 1990s, the couple has been visiting Ukraine on various missions. As part of the Protection of Patriots Volunteer Project, over 19,000 soldiers and over 2,000 cadets completed the tactical medicine training program. Supported by this initiative, the army was provided with more than 16,500 kits made exactly to NATO standards and activities aimed at the rehabilitation of those injured during the Revolution of Dignity were arranged.

(Editor’s note: Dr. Ulana Suprun’s work was featured in a front-page story in The Ukrainian Weekly on July 20, 2014.)