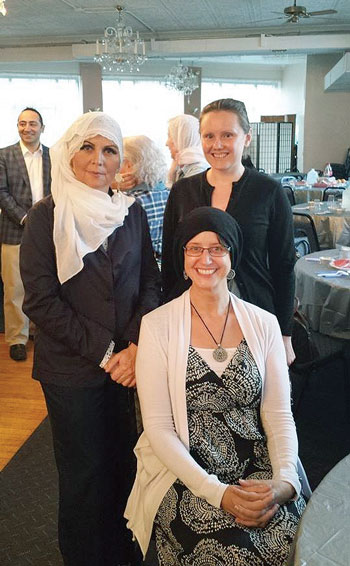 NEW YORK – On Saturday, July 11, America’s Brooklyn-based Crimean Tatar community invited members of the Ukrainian diaspora to join them for their Iftar at the American Association of Crimean Turks Mosque in New York City.

Representatives of the Ukrainian Congress Committee of America (UCCA), the nation’s largest representation of Americans of Ukrainian descent, attended the meal for the second consecutive year, along with members of Razom, a Ukrainian American human rights organization.

The community Iftar is the evening meal when Muslims end their daily Ramadan fast together at sunset. Prayers preceding the meal were led by Imam Adem Sakarya, who made a special inclusion that evening, praying for the well-being, health, strength and courage of Nadiya Savchenko and Akthem Chiygoz.

Ms. Savchenko, Ukraine’s first-ever female air force pilot, an Iraq war veteran, a member of Ukraine’s Parliament and a delegate to the Parliamentary Assembly of the Council of Europe, was captured in southeastern Ukraine in June 2014 and abducted to Russia. Russian authorities have illegally detained Ms. Savchenko in isolation for over a year while she awaits her trial in Russian court.

Mr. Chiygoz, deputy head of Crimean Tatar Mejlis, stands accused of participation in a pro-Ukrainian rally near the Crimean Parliament in February 2014, and has similarly been held without trial for over a year on trumped up charges of murder and “organizing mass disorder” against his homeland’s illegal occupiers. The Russian Federation has cracked down on dissent since taking control of the Crimean peninsula, and the indigenous Crimean Tatars are continuously being targeted by Moscow’s system of oppression.

The UCCA noted that the Ukrainian American community is once again grateful for the efforts of Ayla Bakkalli, the U.S.representative of the Crimean Tatar Mejlis, who arranged for the invitation to attend Iftar that evening and who continuously works to strengthen the growing bond between our communities. As both communities broke their fast at the end of the Ramadan prayers that evening, the hope of restoring freedom in the Tatar homeland remained in the hearts and minds of all, united as one.