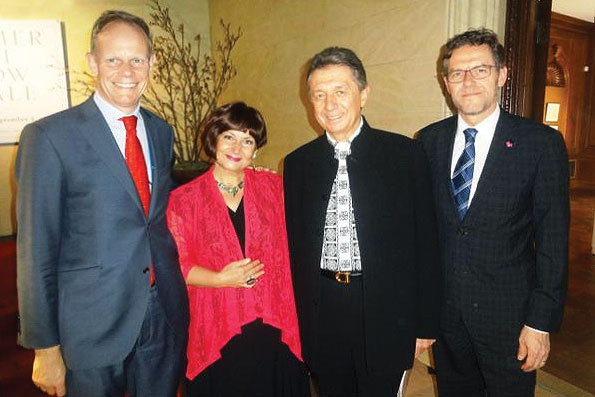 NEW YORK – On June 29, Ukraine’s Constitution Day, the Ukrainian Congress Committee of America and the permanent representative of Ukraine to the United Nations co-hosted an evening reception at the Ukrainian Institute of America. The event was organized for the U.N. diplomatic corps and leaders of the Ukrainian American community to commemorate the Ukrainian national holiday and showcase Ukrainian talent.

The evening began with opening remarks by Yuriy Sergeyev, Ukraine’s ambassador to the United Nations. Ambassador Sergeyev welcomed the over 50 ambassadors, and permanent and deputy representatives to the U.N., as well as leaders of the Ukrainian American community, stating, “Today my country is celebrating a great national holiday – the Day of the Constitution of Ukraine. For 19 years the fundamental law has been the legal basis for Ukraine’s statehood, development of society and strengthening of democracy.”

“During the Revolution of Dignity,” he continued, “the citizens came out into the streets of Ukraine to protect their constitutional rights against the usurpation of power. Today Ukrainians are also defending the unshakable values provisioned by the fundamental law: independence and territorial integrity of the country that are being severely challenged by Russia’s aggression against Ukraine.

“While maintaining its key principles and provisions, the Constitution as the fundamental law must adequately respond to the global changes and challenges posed by the dynamic historical conditions of today. Driven by the desire to bring the living standards of Ukrainians [into line with]those of the developed European countries, we are working hard on improving the provisions of the fundamental law of Ukraine,” Ambassador Sergeyev said. “We fully realize that constitutional reform is an objective necessity aimed guaranteeing the further development of our country, its full integration into the European community, the circle of successful countries of the world.”

Speaking on behalf of the Ukrainian American community, Tamara Olexy, president of the Ukrainian Congress Committee of America, stated, “…marking Ukrainian Constitution Day is significant, not only to contemplate Ukraine’s present-day system of government, but also to reflect upon the history of democracy in Ukraine.”

She noted that many people are probably unaware of “the deep-rooted democratic ideals that have forged Ukraine as a nation – from its very first Constitution written in 1710 by Pylyp Orlyk, …a Constitution which is acknowledged as the first modern European constitution.” The main theme of the 1710 Constitution, Ms. Olexy pointed out, was complete independence for Ukraine; it opened with this poignant declaration: “Ukraine on both sides of the Dnipro River must remain free from foreign domination for all time to come.”

Ms. Olexy emphasized that these opening words “continue to be the foundation upon which modern-day Ukraine rests,” adding, “Unfortunately, after almost 24 years of renewed independence, Ukraine still wrestles with the threat of foreign domination, specifically, present-day Russian occupation and aggression which continues to threaten Ukraine’s independence and territorial integrity.”

Ms. Olexy then introduced the evening’s guest speaker, Judge Bohdan Futey, one of the consultants to Ukraine’s 1996 Constitution, who was recently appointed by President Petro Poroshenko to serve as a member of the Constitutional Commission.

Being intimately involved with the constitutional process, Judge Futey touched upon Ukraine’s adoption of the 1996 Constitution, stating that it “addressed the concerns of Ukrainians about their national interests, the establishment of their statehood, as well as the suppression of rights by the Soviet Union, and, at the same time what kind of social changes a democratic future would bring. The Constitution was commended by a number of international organizations, including the Venice Commission, particularly for its guarantee of many human rights.”

He continued by providing an overview of the constitutional process through the current crisis, stating: “President Poroshenko, by decree, has established a Constitutional Commission with the mandate to amend three areas of the Constitution: decentralization, human rights and the judiciary. The aim is to make it more democratic, closer to international standards, as the government of Ukraine moves forward with reforms for a prompt European integration.”

Judge Futey further stressed that if Ukraine wants this to be effective then “time is of the essence.” He explained: “These amendments should be adopted in a session of the Rada by 226 votes and sent to the Constitutional Court for its decision. At the next session, if the Constitutional Court approves, the Rada needs 300 votes for the changes to be finally adopted and this should be done in September 2015, since local elections are scheduled for October 25, 2015.”

In concluding his remarks, the judge remained optimistic, stating, “Hopefully, the recent events throughout the country, the people’s revolutionary expression and the experience on the Maidan during the Revolution of Dignity will be an irrevocable incentive and mandate for the implementation of individual constitutional rights. And that will make us proud to be part of this Ukrainian experience as the country moves forward with reforms to integrate with the European Union.”

The artistic portion of the program, titled “Transforming Shared Vision into Action for Peace,” commenced with a special concert featuring young talents from Ukraine. Three pianists from the Lysenko Special Music School in Kyiv inspired the audience with their moving performances of works by Ukrainian, European and American composers.

The first to perform was Khrystyna Mykailichenko, a 9-year-old prodigy from Crimea, who played selections from the works of Revutsky, Chopin, Debussy and Copland. Yevhen Motorenko, 15, dazzled the audience with his extraordinary presentation of pieces by Nyzhankivsky, Chopin and Silvestrov. The musical program concluded with a special guest appearance by Dmytro Sukhovienko, a renowned pianist who currently serves as artistic director of a series of classical concerts at the European Parliament in Brussels. Mr. Sukhovienko passionately performed selections from the works of Kolessa, Rachmaninoff, Gluk and Liszt.

Following a standing ovation for the Ukrainian performers, guests were invited to a Ukrainian-themed reception.