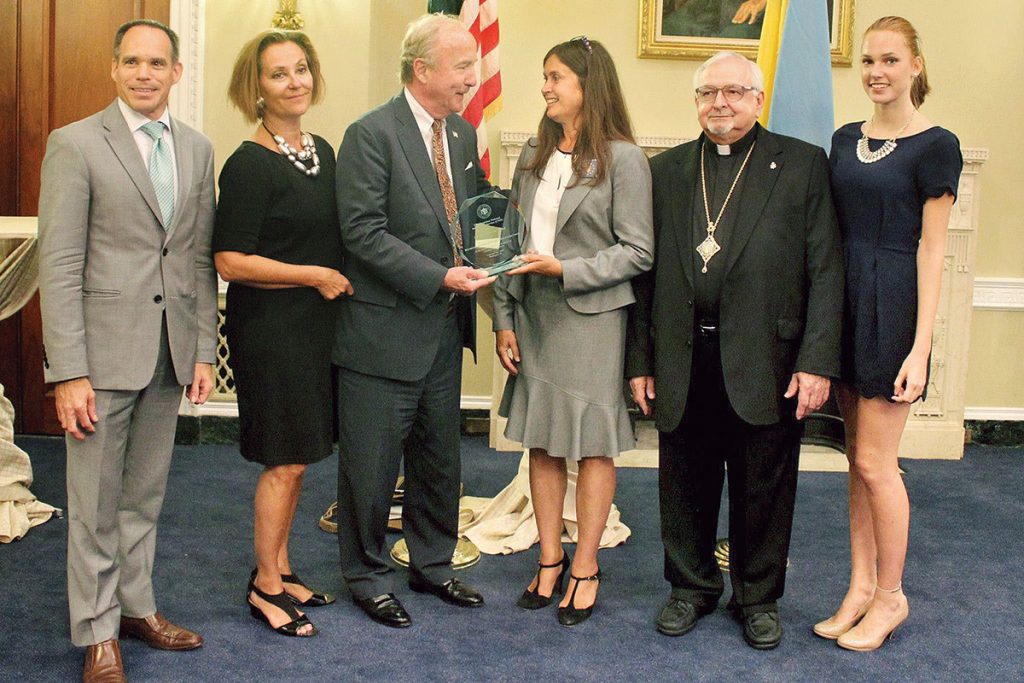 WASHINGTON – More than two dozen Ukrainian Americans from New Jersey, New York, Delaware, Pennsylvania, Washington state and the District of Columbia met on Capitol Hill on Wednesday, July 15, for the second Ukrainian Day advocacy event to be held this year.

Ukrainian Day participants met with House and Senate members or their staff at more than 20 congressional offices to press their case for more robust U.S.-Ukraine relations, including economic and military assistance. They were joined by representatives of groups that comprise the Central and East European Coalition (CEEC).

“It’s incredibly important for Ukrainian Americans from across the country to meet personally with members of Congress and their staffs so that they realize how strongly we feel about the need to defend Ukraine’s democratic future,” said Katya Sedova, representing the Ukrainian Association of Washington State.

“Normally, Ukrainian Days is held once a year and is a time during which members of the Ukrainian American community meet with our elected representatives to speak on topics related to Ukraine,” noted event organizer Michael Sawkiw, director of the Ukrainian National Information Service (UNIS), the public affairs office of the Ukrainian Congress Committee of America (UCCA). “But the past 18 months have been extraordinarily difficult for Ukraine and, once again, Ukrainian Americans must send the message that Ukraine’s fight for democracy and independence is not a battle that it can fight alone – Ukraine must be supported vigorously by the United States.”

Ukrainian Day on July 15 began with a morning briefing session that included presentations by former U.S. Ambassador to Ukraine John Herbst, currently the director of the Eurasia Center at the Atlantic Council; a senior policy analyst for Eurasia at the Open Society Foundations, Jeff Goldstein; and the coordinator of the Ukraine Crisis Media Center, Vasyl Myroshnychenko. Bishop John Bura of the Ukrainian Catholic Church led the participants in a prayer for Ukraine and the welfare of the Ukrainian American community.

Each speaker underscored that Russia’s actions threaten not only Ukraine, but also the stability of the world. All acknowledged the seeming disconnect between the strong support for Ukraine in Congress and the Obama administration’s more tepid response to the crisis. Briefing papers were distributed to participants that included several main topics of advocacy: military assistance to Ukraine; “How Congress Can Assist Ukraine” (which included an overview of legislation for Ukraine); membership in the Congressional and Senate Ukraine caucuses; and information regarding the upcoming dedication of the Holodomor Memorial in Washington, which is slated for November 7.

Ms. Sedova of Washington state had the distinct honor of being invited to a constituent coffee meeting with Sen. Murray. She also briefed Sen. Catwell about the dynamic Ukrainian American community in Washington State. Rep. McMorris Rodgers, chairperson of the House Republican Conference, also met with Ms. Sedova and Mr. Sawkiw in her Capitol office to discuss the current situation in Ukraine and how Congress might be of greater assistance.

The daytime advocacy activity was bolstered by an evening congressional reception in the House of Representatives Natural Resources Committee hearing room.

The Ukrainian National Information Service (UNIS) presented the Friend of UNIS award to the Congressional Ukrainian Caucus co-chair Rep. Fitzpatrick for his leadership at the helm of the Congressional Ukrainian Caucus and his sponsorship of House resolutions on Ukraine and support of Ukraine-related initiatives in Congress, and Rep. Frelinghuysen, chairman of the House of Representatives Defense Subcommittee of the Appropriations Committee, who oversaw the passage of HR 2685, the House Defense Appropriations Bill, which included $200 million of security assistance for Ukraine.

UNIS Director Sawkiw welcomed Ukrainian Days participants, and Bishop Bura delivered the invocation. Mr. Sawkiw then introduced a special guest, Natalie Jaresko, Ukraine’s minister of finance, who was in Washington for the first ever U.S.-Ukraine Investment Forum. Minister Jaresko spoke candidly about the situation in Ukraine and thanked “all the supporters of Ukraine in Congress and especially the Ukrainian diaspora for not forgetting about a country which is fighting for its survival and preserving its independence.” A boisterous round of applause filled the room as the minister concluded her remarks.

Afterwards, UCCA President Tamara Olexy expressed gratitude to the community members who participated in this Ukrainian Day, and to members of Congress for hearing the community’s pleas for assistance to Ukraine.

Reps. Marcy Kaptur (D-Ohio) and Sander Levin (D-Mich.), co-chairs Congressional Ukrainian Caucus, which was formed in 1997 as a bipartisan group of members of Congress dedicated to advancing U.S.-Ukraine bilateral relationship, also attended the congressional reception. Each co-chair reiterated the importance of Ukrainian American constituents and their interaction with congressional offices.

Reps. Kaptur and Levin spoke of the tremendous sacrifices being waged in Ukraine on behalf of freedom and democracy. Rep. Levin emphatically stated, “We will be with Ukraine until the end. Ukraine’s struggle is our struggle.” Rep. Kaptur spoke of her previous travels to Ukraine and the importance of engaging with the Ukrainian people. She announced that a congressional delegation comprising mostly women members of Congress will be heading to Ukraine in early August.

Rep. David Cicilline (D-R.I.) congratulated the Ukrainian community for its activism and noted the effectiveness of previous advocacy events that turned the tables in Congress, resulting in increased support for Ukraine.

Yaroslav Borsiuk, chargé d’affairs at the Embassy of Ukraine, commented on Ukrainian American activism and urged the community to continue its involvement in Ukraine’s political process. “We have a common goal before us: we are all striving to integrate Ukraine into Euro-Atlantic structures and return its former status of a prominent European state. Together, I am confident we will successfully resolve our issues,” stated Mr. Borsiuk.

Alice Kipel from the Belarusan-American Association spoke on behalf of the CEEC, a coalition of Central and East European national ethnic organizations that represent between 20 million and 22 million Americans. The CEEC has been an ardent supporter of Ukraine and its struggles against Russian aggression.

The day concluded with the singing of the Ukrainian national anthem and a group photo with the Minister Jaresko.

The next Ukrainian Days advocacy event will be held on September 16-17.