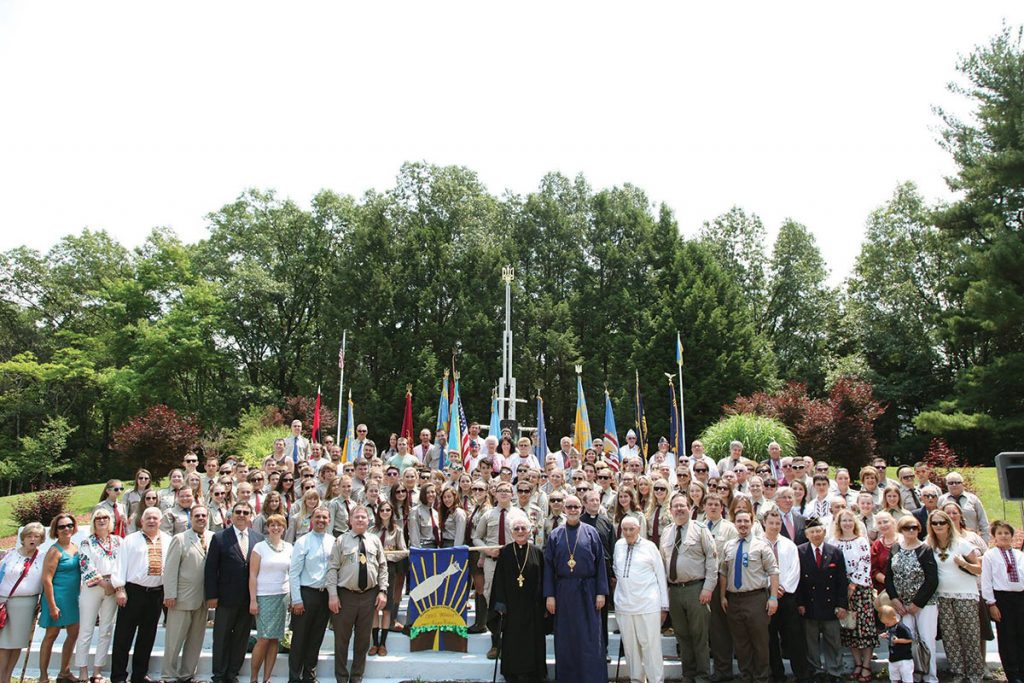 ELLENVILLE, N.Y. – “Our nation is. Our nation will always be.” With these final words of wisdom from the great Ukrainian poet of the 1960s, Vasyl Symonenko, the Ukrainian American Youth Association’s “Vyshkilnyi Tabir” (a member-only educational-leadership camp) marked both the end of a two-week adventure and the beginning of a journey in community leadership for many of its graduates.

As a camp held annually on the UAYA property in Ellenville, N.Y., the Vyshkilnyi Tabir aims to raise high school-aged UAYA members to become leaders and teachers in the Ukrainian community. In a span of two weeks, from June 28 to July 11, campers sat in on lectures by renowned UAYA “vykhovnyky” (educators) and took part in various leadership- and team-building activities.

Led by “Kommendant” (camp director) Crystyna Kobyleckyj and “Holovnyi Vykhovnyk” (chief instructor) Dmitri Lenczuk, campers were expected to learn diligently, but encouraged to have fun in the process. The main camp project was an experimental “camp council” consisting of all third-year campers and some second-year and first-year campers in between. This council took charge of organizing all camp events, including, but not limited to, a bonfire, a masquerade dance and a fund-raiser for humanitarian aid to Ukraine’s troops. The representatives in the council took leadership positions, sorting the campers into committees that organized all of the camp’s main events and projects. Each council member had a mentor from the camp’s Komanda (leaders), enabling them to experiment in their style of leadership with help from experienced professionals.

The results of this project were spectacular. The “Vykhovnyky” group of campers organized a video of support for Ukraine’s troops and a camp bonfire, which, despite the incessant rain, included a program of skits, poems and songs that was easily adapted to an indoor setting.

The “Kulturnyky,” among the largest groups in the camp, split up into subcommittees to organize a traditional Ivan Kupalo celebration and a masquerade dance, in addition to creating a symbolic camp flag and choreographing a traditional folk dance for the Nadiya Ye Festival.

The “Ratnyky,” a rival group in terms of size to the “Kulturnyky,” created a theme-based “capture the flag” game for the camp to take part in, along with a re-design of the camp’s entry gate. This group also lent a helping hand in many other projects, including the building of the aforementioned, though unfortunately unused, bonfire.

The “Mizhnarodnyky” organized a welcoming committee for the guest band from Ukraine, Lama, which performed at the Nadiya Ye Festival and visited the UAYA campers.

The “Suspilnyky” created a competition among the campers that solved two major problems: how to help Ukraine from America and how to keep the campgrounds clean. The innovative solution included several modes of collecting plastic bottles, which were later recycled and exchanged for money. The funds raised were sent to the Ukrainian humanitarian organization “Vilni Liudy,” which runs out of Kharkiv, Ukraine, and aids battalions in eastern Ukraine.

The camp, officially named “Heroyi Ukrainy imeni Ally Horskoyi” (“Heroes of Ukraine, in Memory of Alla Horska”), was structured in order to remember and honor a different Ukrainian hero each day of the week. Ranging from Volodymyr the Great to Alla Horska and from Stepan Bandera to the Heavenly Brigade, each day had a theme and a lesson in how Ukraine was led in the past. By learning from previous successes and failures, these future leaders of the UAYA and the Ukrainian diaspora are now better equipped to face the challenges of two evolving Ukrainian societies: in America and in Ukraine.

Campers had many opportunities that were unique to this camp. After being the main speaker at the tribute to Ukraine’s heroes, “Sviato Heroyiv,” held by the Organization for the Defense of Four Freedoms for Ukraine, Dr. Volodymyr Viatrovych, the head of the Ukrainian Institute for National Memory, spoke to the campers about the history of the Maidan and the importance of Bandera in the current war in eastern Ukraine.

Campers had the opportunity to view the documentary about the Ukrainian Bandurist Chorus, “Music of Survival,” along with a Q+A session with its award-winning director, Orest Sushko. Campers met and welcomed the Ukrainian rock band Lama with their own hit, “Z Dzherela,” and participated in a Q+A session held exclusively for the camp.

Vyshkilnyi Tabir performed not only for Sviato Heroyiv, but also in the Nadiya Ye Festival, presenting three songs and a dance. Last, but not least, all campers had front-row seats to performances by both DJ Stas and Lama.

Over the course of two weeks, campers learned how to lead and how to teach, not only through standard lessons, but through experience and unique opportunities. It became increasingly evident as the camp progressed that, through patience and practice, these campers will not only become active members of the UAYA community, but an active part of the Ukrainian diaspora as a whole.