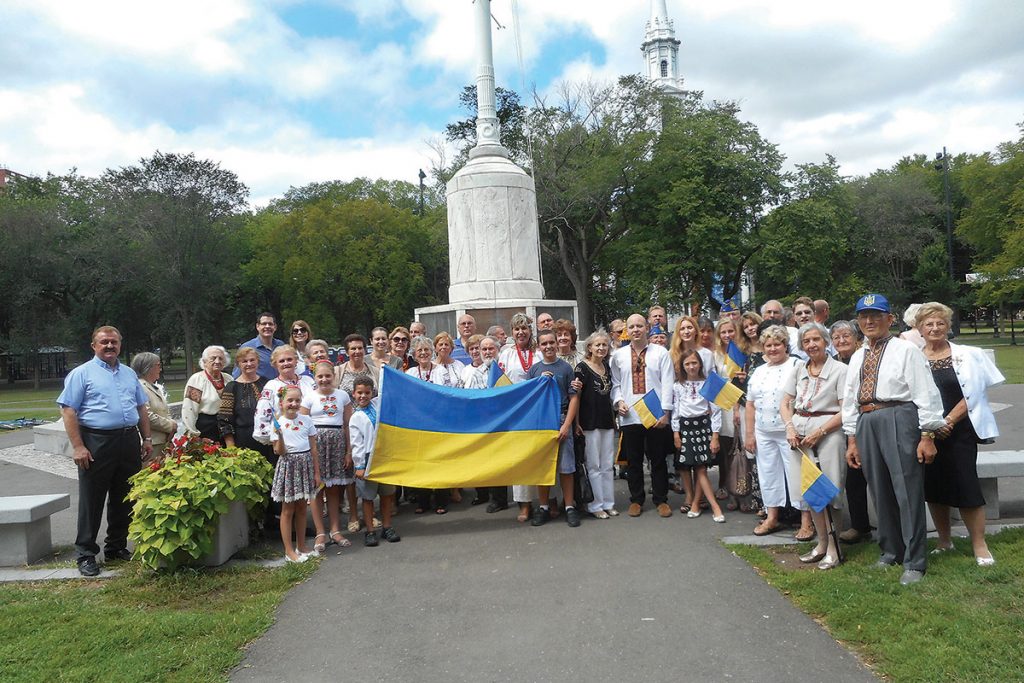 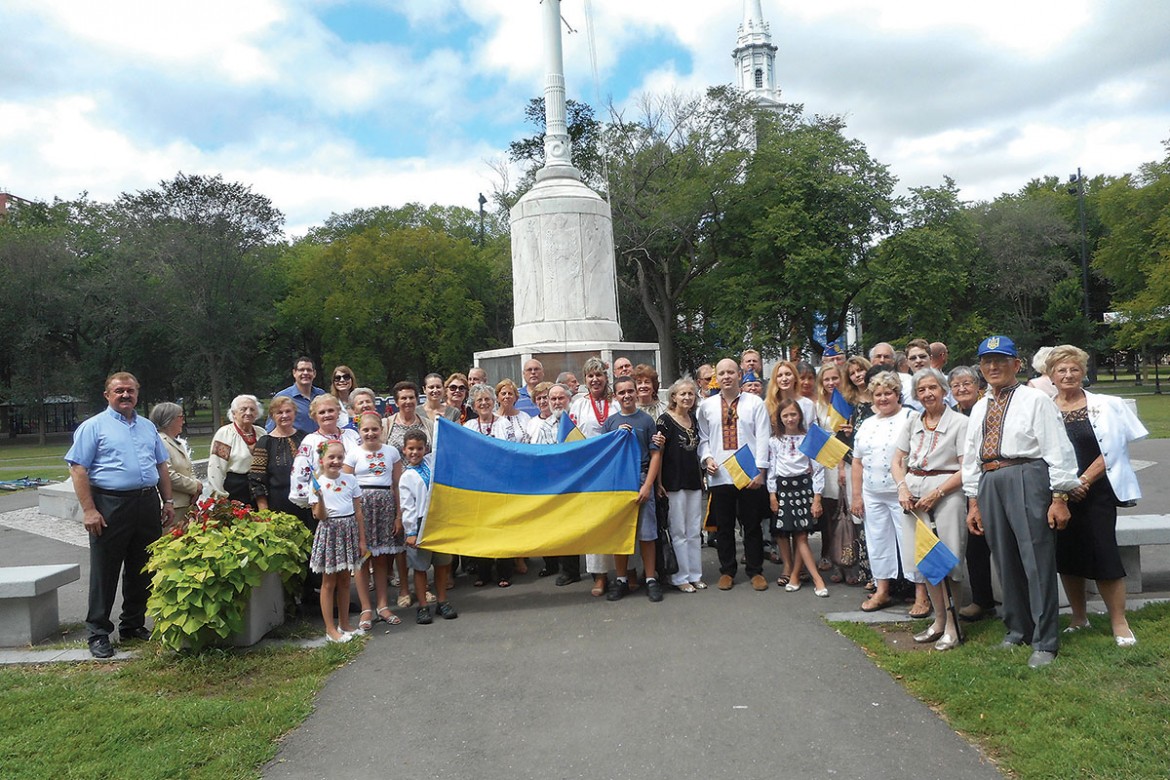 NEW HAVEN, Conn. – Local Ukrainians celebrated the 24th anniversary of Ukraine’s independence on Sunday, August 23, at the New Haven Green as the Ukrainian flag flew along with the American flag. There was a program that included the reading by Michael Muryn of the proclamation of the city of New Haven, signed by Mayor Toni Harp, declaring August 24, 2015, as Ukrainian Independence Day. It was an emotional day for the participants of this commemoration because of the war that is ongoing in Ukraine; they prayed for a better future for their ancestral homeland. 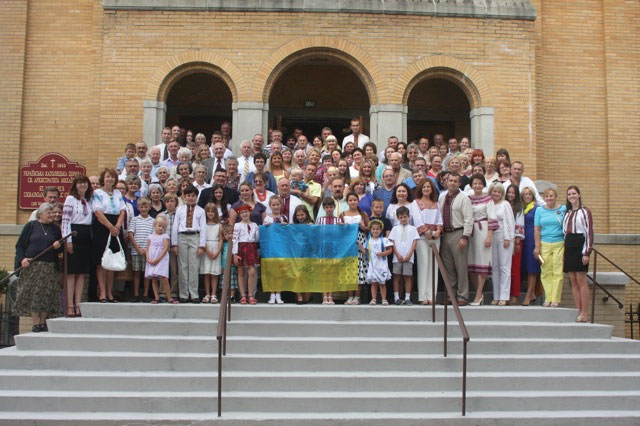 HARTFORD, Conn. – Members of the Greater Hartford Ukrainian American community commemorated the 24th anniversary of Ukrainian independence on Sunday, August 23, with a liturgy, coffee hour and short program at St. Michael Ukrainian Catholic Church in Hartford, Conn.  The blue-and-yellow flag of Ukraine was displayed at the Connecticut State Capitol Building in Hartford. 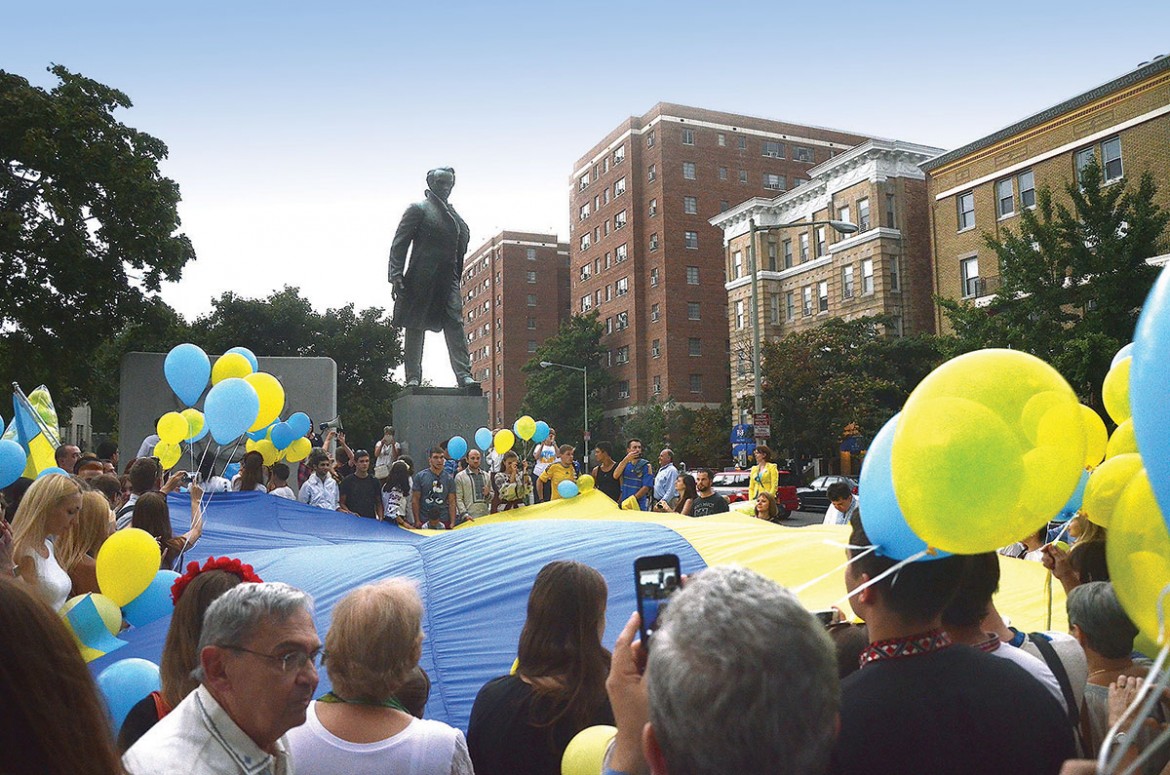 WASHINGTON – A large crowd of the Washington-area Ukrainian community gathered in front of the Taras Shevchenko monument on August 24 to celebrate Ukrainian Independence Day. Organized by the Razom organization, the people came with small Ukrainian flags in hand, joined together in front of the monument to hold a huge Ukrainian flag and some 200 blue and yellow balloons. Following remarks by Anastasia Rybytska, co-founder and vice-president of Razom, and Ukraine’s Ambassador to the U.S. Valeriy Chaly, the crowd released the helium-filled bio-degradable balloons into the sky to send “a tribute to Ukrainian heroes” fighting against Russian aggression in Ukraine. They concluded the ceremony with the singing of the Ukrainian national anthem and a few Ukrainian folk songs. The crowd dispersed when a forecasted rainstorm arrived. Ambassador Chaly also participated in another major Washington-area Independence Day gathering on the previous day – an all-day outdoor festival marking Ukraine’s anniversary at the Holy Trinity Ukrainian Catholic Church in suburban Silver Spring, Md. 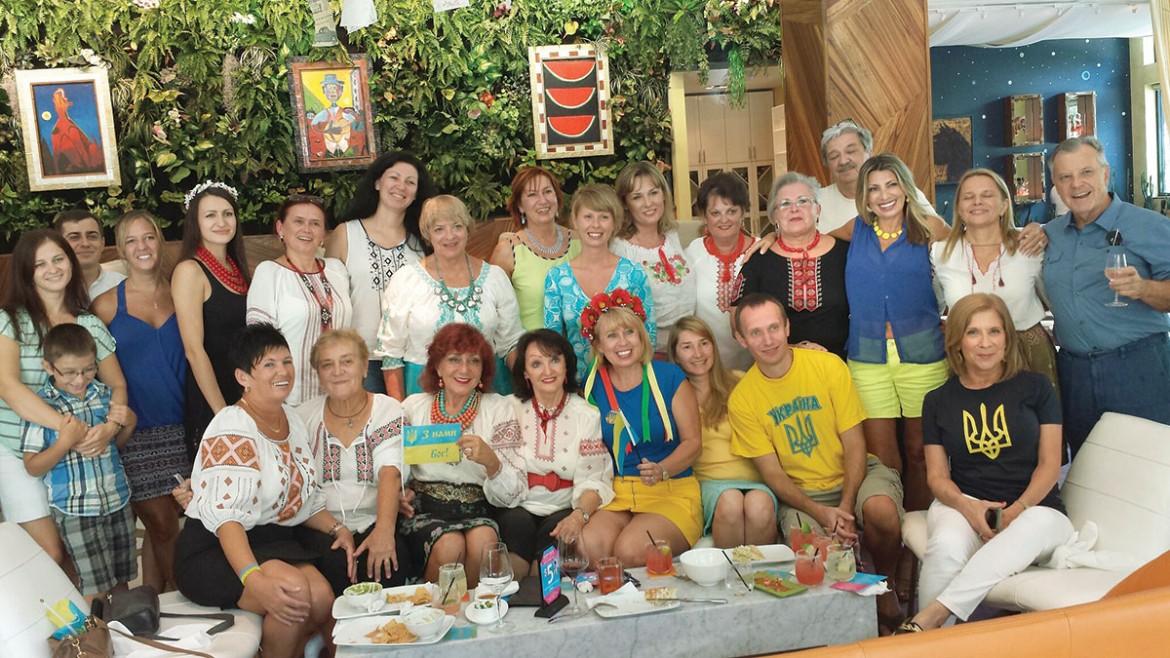 NAPLES, Fla. – Members of the Ukrainian community, particularly Ukrainian National Women’s League of America Branch 136, gathered on Sunday, August 23, to celebrate Ukraine’s Independence Day. The group is seen above at Masa, a local restaurant. The recently established UNWLA branch, whose president is Natalie Santasiero, is growing by leaps and bounds. 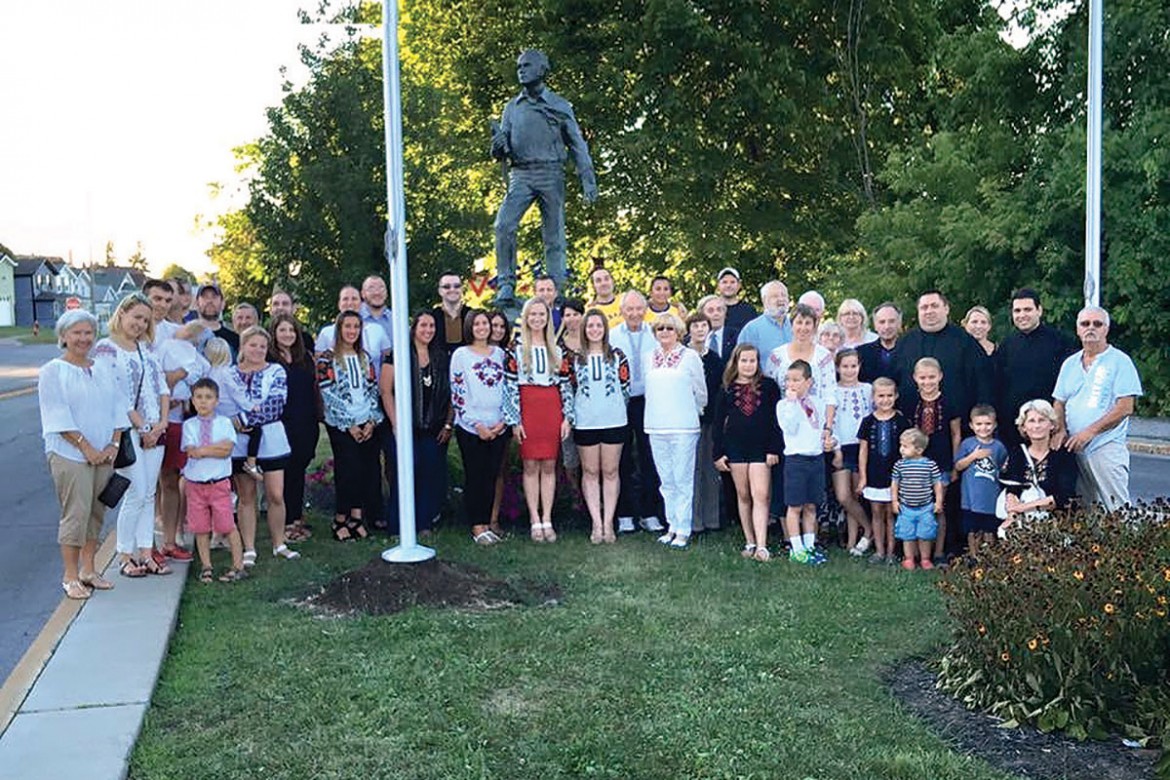 SYRACUSE, N.Y. – To mark the 24th anniversary of Ukraine’s independence, on Saturday, August 22, members of the Ukrainian community gathered at the Syracuse Ukrainian National Home and walked to the nearby Taras Shevchenko monument for a special prayer and balloon release. On Sunday, August 23, Ukrainian American Youth Association members assisted in a flag-blessing at St. John the Baptist Ukrainian Catholic Church. On Monday, August 24, the Odesa Ukrainian dancers performed at Syracuse City Hall. The segment was televised on the local news. 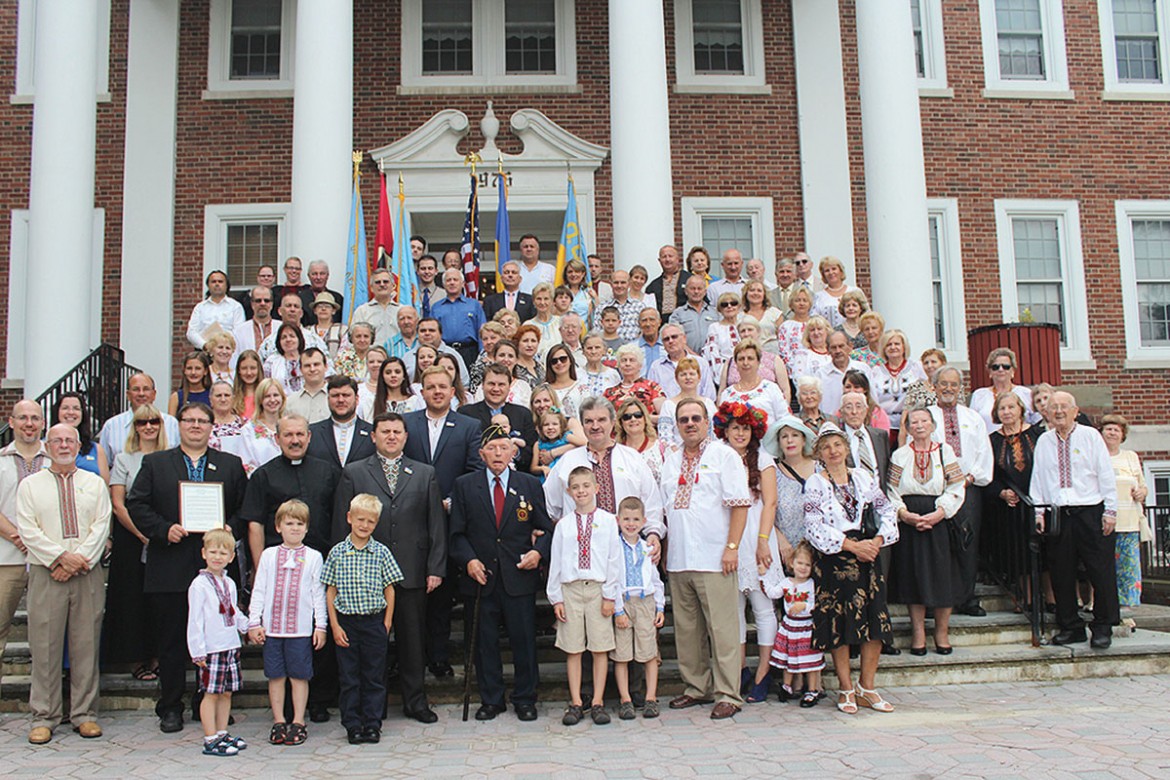 UNION TOWNSHIP, N.J. – On August 23, the Ukrainian community of Union Township and surrounding areas in New Jersey commemorated the 24th anniversary of Ukraine’s independence with the reading of a proclamation and a flag-raising ceremony outside of the Municipal Building. The main speaker at the event was Mark Howansky, president of the Organization for the Defense of Lemko Western Ukraine (OOL). A luncheon and celebratory program followed at the Ukrainian Community Center in nearby Irvington, N.J.