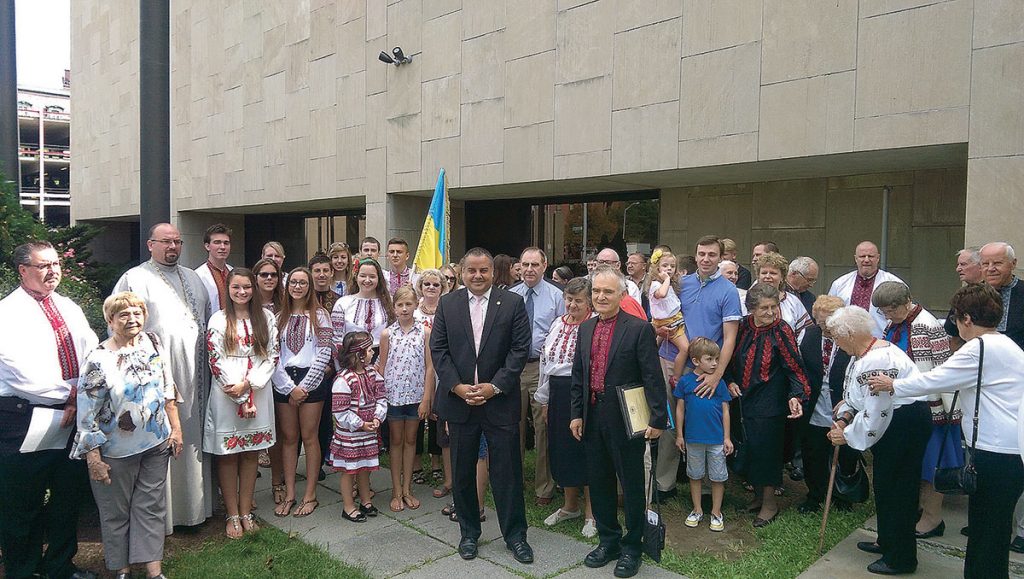 BINGHAMTON, N.Y. – The Ukrainian American community here has commemorated Ukrainian Independence Day with a flag-raising ceremony at Binghamton City Hall since the 1950s to the present, at first marking that day on January 22 and, since 1991, on August 24.

Preceding this year’s flag-raising, the chairman of the local branch of the Ukrainian Congress Committee of America, Lubomyr Zobniw, introduced Mayor Richard David, who proclaimed August 24, 2015, to be the “24th Ukrainian Independence Day” in city of Binghamton.

The Rev. Teodor Czabala, pastor of Sacred Heart Ukrainian Catholic Church, and Pastor Nikolay Ilchishin of the First Ukrainian Pentecostal Church reminded all about the power of the prayer.

Taras Stets gave a commentary based on concerns and issues relevant to Ukraine and to the Ukrainian American community. He highlighted how Russia’s rulers have tried to make Ukraine cease to exist and explained why the United States should provide lethal defensive arms to Ukraine. He also noted that this year, on the weekend of November 6-8, everyone is invited to the unveiling of the Holodomor Memorial dedication ceremony in Washington.

Victor Czumak recited in English the “Prayer for Ukraine,” which also served as an introduction to his and Stephan Czumak’s singing in Ukrainian of this wonderful prayer.

After the “Pledge of Allegiance Ukrainian youths in embroidered dress assisted the mayor in raising the Ukrainian flag while the Ukrainian anthem was sung with pride.

All Binghamton TV news channels covered this event, as did the Binghamton Press both online and in print.