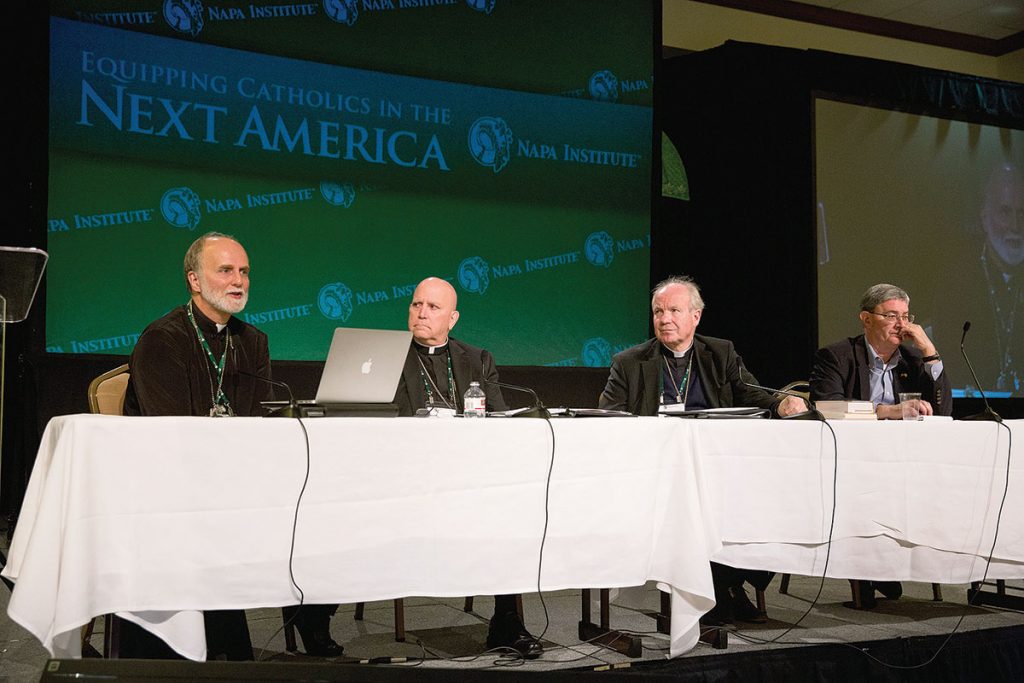 Press Service of the Ukrainian Catholic Education Foundation
Bishop Borys Gudziak, Archbishop of Denver Samuel Aquila, Cardinal Christoph Schonborn of Vienna, and George Weigel of the Ethics and Public Policy Center participate in a panel discussion at the Napa Institute on August 1.

IRVINE, Calif. – Bishop Borys Gudziak, the leader of the Ukrainian Catholic Eparchy of Paris, Benelux and Switzerland, joined a prestigious panel of Catholic theologians in a discussion of challenges facing families in the 21st century.  The roundtable discussion on August 1 was part of the annual Napa Institute conference that each summer brings together prominent clergy, business leaders, Catholic journalists, Church activists and philanthropists under the motto “Equipping Catholics in the Next America.”

The Saturday morning workshop was moderated by Papal biographer and social commentator George Weigel, the author of “Witness to Hope,” the biography of St. Pope John Paul II.  The panel featured Cardinal Christoph Schonborn of Vienna, an influential adviser to Pope Benedict XVI and chief editor of the New Catechism of the Catholic Church.  It also featured Archbishop of Denver Samuel Aquila, a strong advocate of conservative Catholic values.

Together with Cardinal Schonborn and Archbishop Aquila, Bishop Gudziak addressed an audience of some 300 guests eager to gain new insights into strategies that might strengthen families, curb the high rate of divorce and promote Catholic social values.

The panel served as a prelude to the October Synod of Catholic Bishops that will focus on issues affecting the family.

Cardinal Schonborn began his presentation by sharing “the worst moment in my life” – the traumatic experience when, at the age of 13, he learned that his parents were getting a divorce.  “What I expect from the Synod is a clear word to parents all over the world: have mercy on your children.”

Bishop Aquila shared his experiences as the bishop of Fargo, N.D., and more recently, as archbishop of Denver:  “Most of our young people and many of our families have been formed by the secular world,” he said.  “Many of them have a very superficial understanding of the truth and dignity and the beauty of marriage.  It becomes very important to present the truth with mercy and charity.”

The bishops’ panel received extensive coverage in the Catholic World Report in an article written by Catherine Harmon (August 2).

In contrast to Cardinal Schonborn and Archbishop Aquila, who painted a rather bleak picture of declining church attendance and loss of faith in Western Europe and North America, Bishop Gudziak began his presentation with encouraging news about the dramatic growth of the Eastern Rite Catholic Church in Ukraine:

“When our Church came out of the underground in 1990,” said Bishop Gudziak, “our Church had been decimated by decades of intense Soviet persecution.  The ranks of our clergy had been reduced to only 300, mostly elderly priests with an average age of 75.  Today, our Church in Ukraine, despite war and severe economic pressures has grown dramatically, with more than 3,000 priests with an average age of 38.  Our seminaries are producing hundreds of new priests every year and vocations are strong.”

This year, for instance, at the Holy Spirit Seminary adjacent to the Ukrainian Catholic University, there are 179 seminarians.

Nonetheless, Bishop Gudziak emphasized the lasting scars of Soviet rule.  “The catacombs are not romantic – the underground is real… Fear and distrust entered into the DNA of the population… We know that all relationships, particularly marriage and family relationships, are based on trust.  And over the last century, the trust of the people of Ukraine has been tried in ways we cannot even imagine.”

To help the predominantly Roman Catholic audience understand the lengths to which the Soviets went to destroy trust among family members, Bishop Gudziak evoked the disturbing example of “Pavlik Morozov” – the young boy who betrayed his own father to the secret police for making comments critical of the Stalin regime.  Bishop Gudziak pointed out that during the Soviet era, there was a street named after Pavlik Morozov in almost every Russian and Ukrainian city, and schoolteachers and propagandists hailed Pavlik as a hero for children to emulate.

“One can just imagine the degree to which fear and mistrust became a powerful force that destroyed families and undermined the authority of parents,” Bishop Gudziak noted.

Despite massive persecution, the Eastern Rite Catholic Church has become a force to be reckoned with in Ukraine.  Mr. Weigel and Bishop Gudziak both spoke of the heroism of hundreds of thousands of demonstrators who took to the streets of Kyiv to overthrow the corrupt government of Viktor Yanukovych, and to set Ukraine on a path to democratic change and ethical values.

Bishop Gudziak paid tribute to Bohdan Solchanyk, a gifted 29-year-old historian from the Ukrainian Catholic University who was killed by government snipers on February 20, the last day of the protests.  He also described the heroism of many priests, both Catholic and Orthodox, and religious leaders of many faiths who celebrated daily prayer services and liturgies on the Central Square of Kyiv and helped to maintain non-violent discipline and provided pastoral counseling throughout the dangerous standoff on the Maidan (Independence Square) from November 2013 through February 2014.

In his summation remarks during the bishops’ panel, Bishop Gudziak ended on a positive note:  “There’s a long road ahead. …There’s bewilderment, there’s frustration.  But we should trust that the Lord is working in history… Let us be peaceful and joyful in our faith in God who is the God of history, who will not let His Truth be trampled.  And as the story of the Church in Ukraine shows, he leads His people from a land of slavery to the Promised Land.”