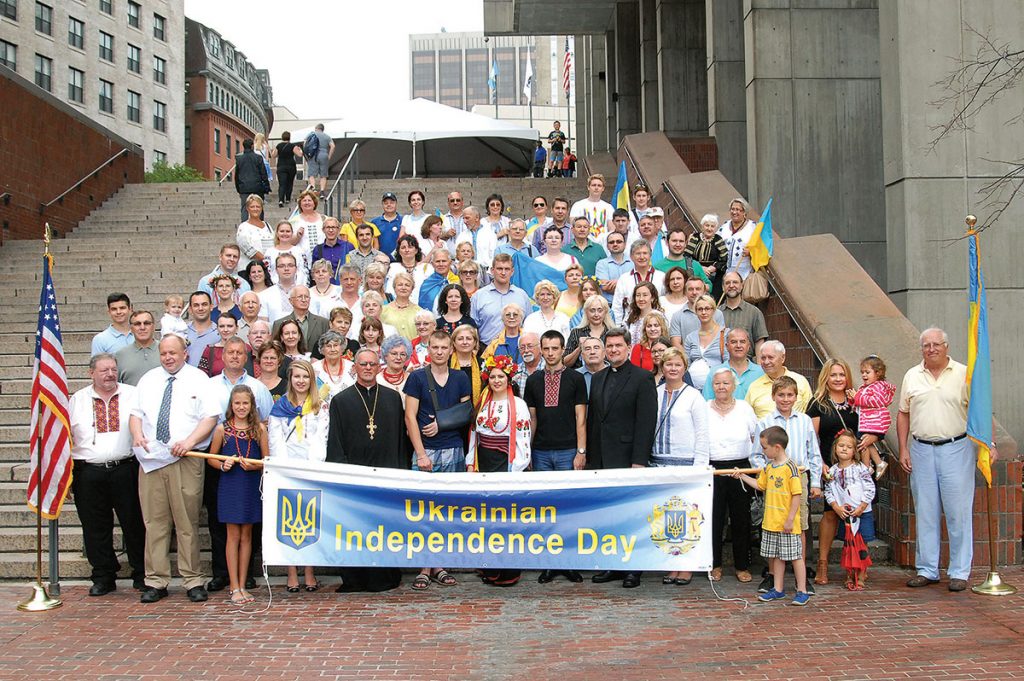 Miroslav Vintoniv
Some of the participants at the Ukrainian Independence Day ceremony and flag raising at Boston City Hall.

BOSTON – More than 1,000 people attended Ukrainian Independence Day events in Boston on Sunday and Monday, August 23-24, and contributed over $5,000 for humanitarian aid for Ukraine under the aegis of the Boston branch of the Ukrainian Congress Committee of America.

The events included commemorative liturgies at area churches; a major cultural program and picnic on the grounds of Christ the King Ukrainian Catholic Parish; a photo exhibit of wounded Ukrainian soldiers; and a program and flag raising at Boston City Hall with formal remarks by City Councilor Michael Flaherty and Ferhan Gomulu, secretary general of the Turkish Cultural Center of New England, who represented the Turkish community of greater Boston.

In attendance at both events were 20-year-old Ukrainian paratrooper Konstyantyn Klepach from Chutiv, Poltava Oblast, and his doctor, Vitaliy Haniuk. The two had come to Boston just three days earlier so that Mr. Klepach, who was the youngest commander in his volunteer division, could have major reconstructive surgery at Massachusetts General Hospital on his left arm, which was seriously damaged during an attack in Avdiyivka, Donetsk Oblast, in March.

During the formal program at the picnic, a number of representatives of various charitable organizations explained their work in Ukraine and invited attendees to visit the information booths they had set up around the grounds.

During the course of the afternoon more than 1,200 varenyky, 800 holubtsi, 12 gallons of borsch, 50 pounds of kapusta and 40 large rings of kovbasa were sold. Most of the food was the result of cooking classes that were held in the weeks leading up to the celebrations and was donated to help raise money for Ukraine.

Members of the Ukrainian American Youth Association’s Boston branch donated all of the desserts and beverages, and then manned the tables. They made over $750, which they donated to the cause.