Monument to Heavenly Brigade to be unveiled in Illinois 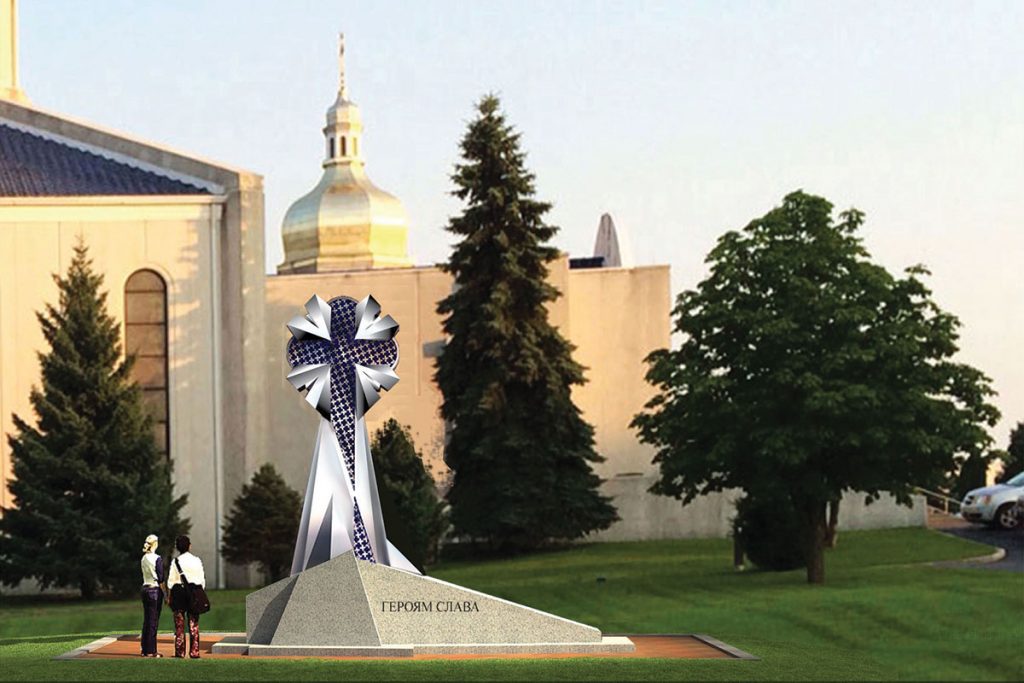 Ukrainian Weekly Editor | The Ukrainian Weekly | Subscription
An illustration of the monument to the Heavenly Brigade that is to be unveiled on the grounds of St. Andrew Ukrainian Orthodox Cathedral (Kyiv Patriarchate) in Bloomingdale, Ill.

BOOMINGDALE, Ill. – Ukrainian artist Yevhen Prokopov and his advisor and architectural collaborator Orest Baranyk have designed a monument dedicated to the Heavenly Brigade, or the Heavenly Hundred as it is commonly known. The monument will be dedicated in Bloomingdale, Ill., on September 20 on the grounds of St. Andrew Ukrainian Orthodox Cathedral (Kyiv Patriarchate).

Mr. Prokopov, a Treasured Artist of Ukraine whose works have been exhibited and are in private collections around the globe, is a Kyiv native now living in Chicago. His monument is a highly polished stainless steel stylized cross with ancient cruciform patterning on the surface of the composition.

He described the symbolism of the soon-to-be unveiled monument: “I believe that a work of art may have many allegorical meanings but there should be one leading idea that supports the content. The main idea of the monument is that one main symbol (cross) contains 100 crosses. One hundred human destinies are unified by one belief that gives birth to one undying mass movement. The blue crosses symbolize the souls of the departed and the white of those heroes whose destiny was to be spared. They stood side by side on the Maidan and were unified in their heroism. The highly polished steel surface of the monument will reflect the sky, which further supports the allegorical reference to the Heavenly Hundred.”

The dedication will take place in Bloomingdale as part of a larger 45th anniversary celebration at St. Andrew Ukrainian Orthodox Cathedral. Patriarch Filaret of the Ukrainian Orthodox Church – Kyiv Patriarchate, who will be on a pastoral visit to the U.S., will be the honored guest.

The dedication of the monument to the Heavenly Brigade is scheduled for September 20 at 1 p.m. Expected attendees include Chicago clergy of various confessions, high-ranking delegations representing the Ukrainian government, members of the U.S. Congress and representatives of the state government of Illinois.

In addition, the Ukrainian Bandurist Chorus will perform in concert on September 19 at 7 p.m. at the Ivan Truchly Auditorium, 300 E. Army Trail Road, Bloomingdale, IL 60108. Tickets are $25 for adults and $15 for children.

Tickets for banquet are $100; tickets for the Bandurist Chorus concert are $25 for adults and $15 for children.

More details on the program are available by calling 630-202-5331 or e-mailing JJaresko@aol.com.