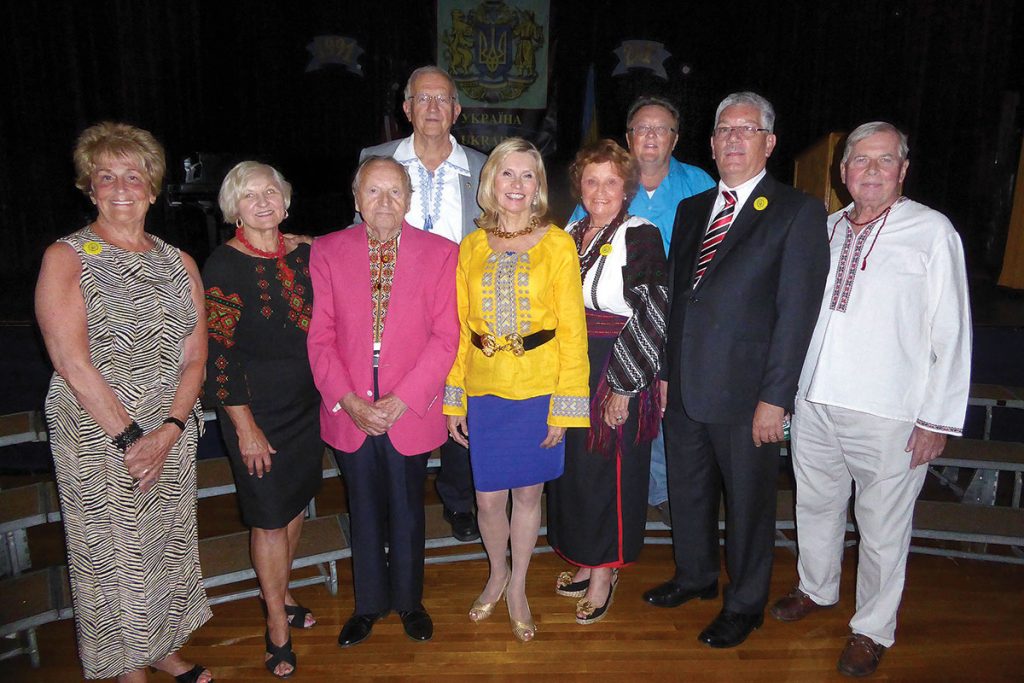 PHILADELPHIA – On Monday, August 24, the Ukrainian American community of greater Philadelphia came together to commemorate the 24th anniversary of Ukrainian independence. The gala concert took place at the Ukrainian Educational and Cultural Center in Jenkintown, Pa.

The commemorative concert was opened by Ivan Yaworsky, the head of the Community Committee to Commemorate the 24th anniversary of Ukrainian Independence. Flanked by honor guards from Ukrainian youth organizations, Mr. Yaworsky welcomed the assembled and asked for a moment of silence for the heroes of Ukraine who died in the undeclared war being waged by Russia. The assembled, led by Dmytro Terlecky, proceeded to sing the Ukrainian and American anthems. Daria Medynska then read the Act of Declaration of the Independence of Ukraine, and the Very Rev. Taras Naumenko, pastor of St. Vladimir Ukrainian Orthodox Cathedral, prayed for peace in Ukraine in his invocation.

Ulana Mazurkevich, the mistress of ceremonies, introduced keynote speaker Trudy Rubin, an award winning journalist and member of the editorial board of the Philadelphia Inquirer. Her “Worldview” column appears twice weekly on the op-ed page of the Inquirer as well as in many other newspapers throughout the U.S. Ms. Mazurkevich informed the assembled that Ms. Rubin is very well acquainted with the situation in Ukraine, having a close working relationship with the Philadelphia Ukrainian Human Rights Committee. In the past Ms. Rubin wrote about the dissident movement in Ukraine and later met and wrote about the democratic movement in Ukraine and its leaders Vyacheslav Chornovil, Mykhailo Horyn and Dmytro Pavlychko.

Ms. Rubin was warmly welcomed by the attendees, many of whom had read her numerous commentaries calling for military aid to Ukraine and exposing Vladimir Putin’s lies. In her address Ms. Rubin spoke about her recent trip to Ukraine in May of 2014. She spoke about going to the war zone in the east of Ukraine to see firsthand the situation there and to report it accurately. Ms. Rubin spoke about the manufactured war being waged by Russia and the need to militarily help Ukraine; she was very critical of President Barack Obama’s stance on Ukraine.

Ms. Rubin also recalled her trips to Moscow, where she met with Borys Nemtsov, the democratic leader who was recently murdered. She also said that when she was in Moscow in 2012 she was present at a very large press conference where only two questions were taken. Her question was “Who is Mr. Putin?” There was no answer. “’Til today,” she said, “there is no answer to this question.”

After her talk, Ms. Rubin was presented with a copy of “History of Ukraine” by Orest Subtelny. The presentation was done on behalf of the Community Committee to Commemorate the 24th anniversary of Ukrainian Independence by Ms. Mazurkevich.

The very popular Prometheus Ukrainian Male Chorus under the baton of Roman Kucharskyy (accompanied on the piano by Irene Zwarych) performed a selection of Ukrainian songs, among them the popular “Carpathian Freedom Fighters” (lyrics by Yar Slavutych, music by Hryhory Kytasty) and “Play, Bandura, Play” (lyrics by Dmytro Lutsenko, music by Ihor Shamo). The audience responded to the performance with thunderous applause and a standing ovation.

Ulana Martyniuk (violin) and Lyuba Shchuyko (piano) performed Vasyl Bezkorovayny’s “Ukrainian Thoughts No. 4 and No. 5.” They were later joined by soloist Yulia Stupen, who beautifully sang Taras Petrynenko’s “Lord Have Mercy on Us.”

The program ended with a benediction by the Very Rev. Taras Lonchyna, pastor of St. Josaphat Ukrainian Catholic Church, who offered a prayer for Ukraine and for its people.