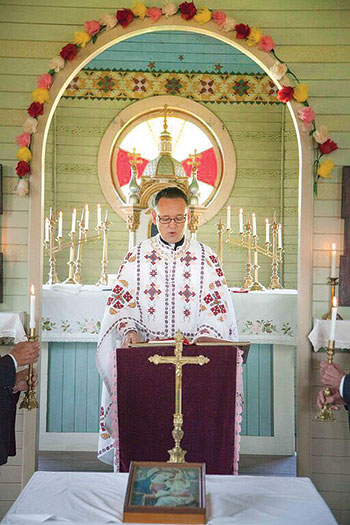 In the presence of well over 500 friends, colleagues, family, parishioners and faithful, and some 30 Ukrainian Catholic priests, deacons and acolytes from the Edmonton Eparchy and beyond, along with Bishop Emeritus Joseph Neil McNeil of the Roman Catholic Archdiocese of Edmonton, Deacon Nakonechny was ordained into the priesthood.

Following the Ordination, a banquet took place at St. Basil’s Cultural Center with over 460 people in attendance. The master of ceremonies for the event was family friend Barbara Hlus. It was a genuine tribute to Father Nakonechny to see so many in attendance; guests came from throughout Alberta and out of province. From the very young to the very senior, Canadian-born and recent immigrants from Ukraine – all were drawn together to rejoice in the sacrament of the priesthood.

Greetings were read from friends and colleagues in Ukraine, Australia, the U.S. and Canada. A heartfelt presentation was made by Martin Hryniuk from Saskatoon, Father Nakonechny’s closest friend and former schoolmate. Elizabeth and John Nakonechny, parents of the newly ordained priest, delivered a very touching greeting. Their expression of love and admiration for their son’s great achievement caused everyone to pause and contemplate the important role all parents can play in their children’s accomplishments.

However, the most poignant and personal moment of all, was when Father Nakonechny revealed an icon he had written himself during his final weeks of preparation for the ordination. The Icon of Christ the Pantokrator, a gift of thanks from a grateful son, was dedicated to his parents. As his first religious act as a priest, he blessed the icon and presented it to his parents. Tears of joy filled most everyone’s eyes.

Father Nakonechny’s journey to the priesthood began early in life, as he himself stated it took him “41 years to prepare” for the day his dream of becoming a priest in God’s Vineyard was realized. Originally from the small rural Alberta community of Mundare, the eldest of five children, Father Nakonechny stated that he felt a call to serve the Ukrainian people virtually his whole life. At the young age of 16, he left home to complete high school at St. Vladimir’s Ukrainian Catholic College/ Minor Seminary in Roblin, Manitoba. From about the same time he served as a cantor in many parishes around Edmonton and East Central Alberta.

He earned a bachelor of arts at the University of Alberta in 1996, majoring in political science with a minor in Ukrainian language and literature. He later studied architecture at the University of Manitoba and in 1996 earned a bachelor of environmental design with a focus on Byzantine church design. Between 2000 and 2002, he studied at St. Josaphat’s Basilian Monastery in Glen Cove, N.Y.

Throughout his youth and student years, the pull of serving the Ukrainian Catholic community was nurtured and continued to grow and Father Jim discerned that his vocation would best be developed as an eparchial seminarian. From 2002 to 2005, he lived at the Holy Spirit Ukrainian Catholic Seminary in Ottawa and studied at St. Paul University and the Metropolitan Andrey Sheptytsky Institute. In 2005, he achieved a Bachelor of Theology Degree in Eastern Christian Studies.

Upon returning to Edmonton, Father Nakonechny secured employment as the Heritage Conservation Specialist for the Ukrainian Cultural Heritage Village, a renowned open-air museum, directing the on-site restoration program. He has always had a passion and an eye for beautifying God’s Churches. His many projects include the interior ornamentation program at Christ the Savior Orthodox Church in Ottawa; ornamentation of the interior walls of St. Vladimir Ukrainian Catholic Church in Red Deer, Alberta, and the Dormition of the Most Holy Mother of God Church in Edmonton, and interior restoration work at St. Josaphat Ukrainian Catholic Cathedral in Edmonton. It was at this cathedral that he had been ordained a deacon in November 2009. He served three years at four different Alberta country parishes in the rural communities of Borschiw, Krakow, New Kiew and St. Michael. For the last two years, he has served at St. Josaphat Cathedral in Edmonton.

On Sunday, August 9, the newly ordained priest celebrated his first divine liturgy at the historic St. Nicholas Ukrainian Catholic Church at the Ukrainian Cultural Heritage Village where he has directed restoration for the last 10 years. He was extremely proud to be attired in hand-made embroidered vestments he received as a gift from his relatives in Ukraine.

The Rev. Nakonechny married his lovely wife, Olya, in 2007 before he was ordained a deacon. They are blessed with two charming sons, currently 3 and 4 years old. On behalf of the priests’ wives, Dobrodiyka Maria Wojcichowsky made a special presentation to Dobrodiyka Olya, warmly welcoming her into the supportive sisterhood of priests’ wives.