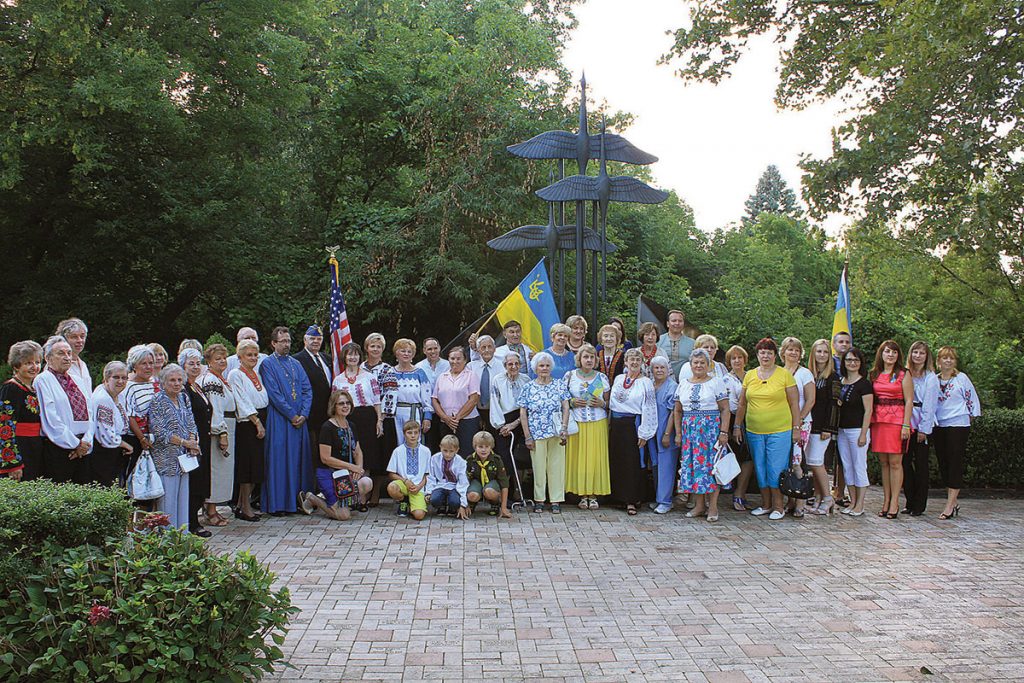 ROCHESTER, N.Y. – Michael Sawkiw Jr., director of the Ukrainian National Information Service (UNIS), was the keynote speaker at the Rochester-area community’s celebration of the 24th anniversary of Ukraine’s independence here on August 23. The event took place beside the Ukrainian Centennial Monument on the grounds of Irondequoit Town Hall.

Mr. Sawkiw, speaking in both English and Ukrainian, praised the efforts of Ukrainian Americans who rallied in support of Ukraine during this crisis-riddled year. His message was on the importance of being politically active. Political advocacy stoked the passage of the Ukraine Freedom Support Act and its signing into law, although the provision on lethal weapons aid to Ukraine requires additional attention for full implementation.

Mr. Sawkiw explained that Ukrainians need to conduct conversations with members of both political parties – Democrats and Republicans – and to hold elected officials accountable for their ideas, actions and legislation on Ukraine. Ukrainian Americans should impress upon government officials the importance of championing an independent, territorially sovereign Ukraine as a priority of American foreign policy in Eastern Europe, he underscored.

Irondequoit Town Councilman John Perticone greeted the Ukrainian community by presenting a proclamation that stated: “…we must not forget those who continue to valiantly defend Ukraine’s independence and human rights, and we empathize with the thousands of uprooted and displaced families and those still fighting for freedom.” The document also recognized the Rochester Ukrainian Group for many years of service to the Irondequoit community.

Rep. Louise Slaughter (D-N.Y.) sent good wishes, noting that she had been privileged to be on the welcoming committee for President Petro Poroshenko on Capitol Hill last year. Irena Skrobach, the chair of the ROC-Maidan Advocacy Committee and until recently a member of the Irondequoit Town Council, lauded Congresswoman Slaughter for her support of the Ukrainian community and the Ukraine Freedom Support Act, as well as her recent efforts to send secure radios to Ukraine.

Monroe County Executive Maggie Brooks praised the Sister City Poltava exchange relationship that the Ukrainian community initiated and supports. In her proclamation she declared August 23, 2015, to be Ukrainian Independence Day in Monroe County.

New York State Sen. Richard Funke sent a proclamation which referred to the human chain for Ukrainian Independence of over 300,000 Ukrainians which stretched between Kyiv and Lviv on January 21, 1990, and noted Ukraine’s declaration of independence the following year.

State Sen. Michael Nozzolio, who has ancestral ties to Ukraine, sent a letter of good wishes and reflected on the incredible adversities Ukrainian people suffered in the “name of freedom,” while State Sen. Joseph E. Robach issued a proclamation on the 24th anniversary celebration of Ukraine’s independence and “the role of Ukrainian culture in Rochester, Monroe County and the State of New York.”

Dr. John Carbone and Joseph Morelle, Jr., both Monroe County legislators, presented a certificate of recognition to the Ukrainian community.

Maritza Buitrago, who is running for Monroe County Family Court, shared her good wishes with the Ukrainian community, as did Tony Proietti, a candidate for the Irondequoit Town Council.

Zorianna Dombchewsky shared her personal reflection on Ukrainian President Poroshenko’s speech to the joint session of Congress on September 18, 2014, which was exceptionally well received, with many standing ovations from Congress. Later in the day, Mr. Poroshenko joined the Ukrainian rally a short distance from the White House. There he spoke with Ukrainian Americans, gestured unity and strength by crossing his raised hands, and then joined the group in singing the Ukrainian national anthem. The moment was electric, Ms. Dombchewsky recalled.

Master of ceremonies Olena Dilai, president of Branch 120 of the Ukrainian National Women’s League of America, an assistant professor of mathematics at Monroe Community College and treasurer of RUG, introduced the following presenter, Tamara Denysenko.

Ms. Denysenko, board member of the Ukrainian Federal Credit Union (UFCU), president of the Ukrainian-American Community Foundation Inc. and president of Rochester Global Connections, informed the community of the “Hands and Hearts for Ukraine” event at the Ukrainian Community Center in Webster, N.Y., on October 17. There will be a dinner meeting with Ihor Pasichnyk, rector, and Dr. Eduard Balashov, director of international studies, both from the National University of Ostroh Academy in Ukraine. At the end of October, Rochester Global Connections will host an exchange with an Open World delegation from Ukraine.

Greetings were also conveyed by Barbara Gutierrez, UFCU treasurer of and a member of its board of directors; and Yaroslav Fatyak, also a member of the UFCU board, sent a letter written in Ukrainian commemorating Ukraine’s independence. The UFCU is a co-sponsor of the event.

Wolodymyr Pavlyuk, chair of the ROC-Maidan Humanitarian Aid Committee, followed up with a summary of donations that the Ukrainian community in Rochester has made to wounded soldiers, orphans, and internally displaced persons in Ukraine. This assistance – together with medical supplies and equipment, including three ambulances now en route to Ukraine – reflects the generosity of our people, he noted. Mychailo Babchuk and Yaroslav Kirik secured, refurbished, outfitted and dispatched the vehicles to Ukraine.

The American and Ukrainian National anthems were sung by Lydia Dzus, a member of the Ukrainian Centennial Committee and former Town Council member and receiver of taxes in Irondequoit. She is also the president of the Church Council at St. Mary the Protectress Ukrainian Autocephalous Orthodox Church.

Yuriy Denysenko, Markian Dwulit and Luckash Lewyckyj, members of Plast Ukrainian Scouting Organization, laid flowers at the foot of the monument and a moment of silence was observed in honor of the Heavenly Brigade and the victims of the downing of Malaysia Airlines Flight 17.

Two songs sung by Julia Pavlyuk, Oksana Andreiko and Petro Andriyaschuk provided a musical interlude to momentarily soothe the sorrow of the long struggle for an Independent Ukraine.

The event came to a close when Ivan Tymchyshyn, the music director of the church choir of the Ukrainian Catholic Church of the Epiphany, directed the audience in singing the spiritually uplifting “Prayer for Ukraine.”

Guests adjourned to the Ukrainian Community Center in Webster for a traditional Ukrainian dinner prepared by several volunteers. Walter Wirlo, the center’s president, greeted the guests as the celebration of Ukraine’s Independence Day continued.