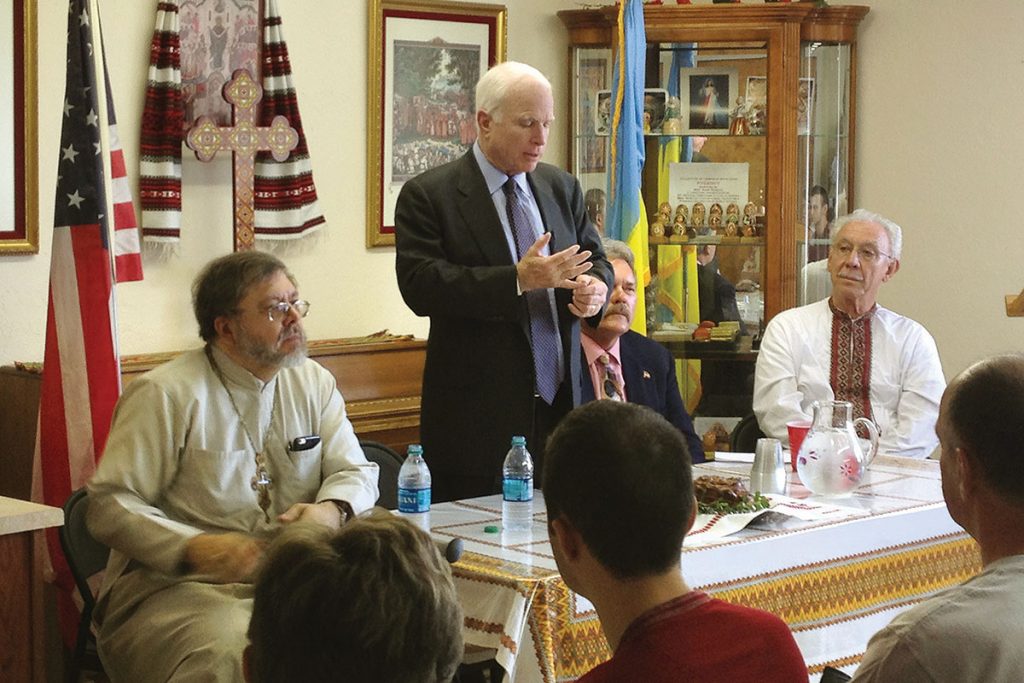 When Russia invaded Crimea and started fomenting rebellion in the Donetsk and Luhansk oblasts of eastern Ukraine, Ukrainians in Tucson, as in so many other diaspora communities, protested with a downtown demonstration, with prayers for Ukraine, and by calling on their congressional representatives to support the sovereignty and territorial integrity of Ukraine. Both Tucson and national media outlets ran interviews with the Tucson pastor, Father Andriy Chirovsky, who is also a professor at the Sheptytsky Institute in Ottawa.

Delegations from the Ukrainian community in Tucson also visited the offices of Arizona Sens. McCain and Jeff Flake.  Since Sen. McCain has been a staunch supporter of Ukraine, having appeared on the Kyiv Maidan in December 2013, and having visited Ukraine several times since, Ukrainian Tucsonans invited the senator, through his staff, to pay a visit to St. Michael’s, the only Ukrainian institution in southern Arizona.  More than a year later that invitation paid off, as Sen. McCain held a town hall meeting at the parish.

The church hall was filled to capacity, with many in the crowd wearing Ukrainian embroidered finery. A delegation of Ukrainians from the Phoenix area (over 100 miles away) supplemented the Tucson Ukrainian community. Greeted with traditional bread and salt upon his arrival by “Dobrodiyka” (the pastor’s wife) Halyna Chirovsky and Dr. Ihor Kunasz of the Ukrainian-American Society, the senator made his way to the front, taking his place next to Ukraine’s Honorary Consul, Taras Warwariw.

The American national anthem was sung. Father Chirovsky introduced Sen. McCain and welcomed him to St. Michael’s, simultaneously summing up some of the community’s concerns.

The senator then offered remarks for over twenty minutes, focusing his attention on Ukraine’s plight and demonstrating his deep expertise on the issue. The entire town hall meeting was dedicated to Ukraine and the U.S. response to Putinism. A question and answer period ensued, during which many community members were able to delve into a number of issues in some detail.

Along with other issues, attention was paid to the question of securing U.S. assistance for seriously wounded Ukrainian soldiers, support for Ukraine’s struggle with post-Soviet corruption and the fate of Ukrainian pilot Nadiya Savchenko. Again and again, Sen. McCain showed himself to be very well informed and at times even ahead of the Ukrainian community on certain questions. He pledged to look into more help for wounded warriors, himself bearing the lasting scars of battle and torture as a POW during the Vietnam War.

A particularly moving moment occurred when a Ukrainian war hero, Lt. Volodymyr Hera, who is paralyzed due to spinal wounds received as he saved 400 Ukrainian servicemen from encirclement at the Luhansk airport in September of 2014, presented Sen. McCain with a shirt embroidered in Ukrainian cross-stitch with a stars-and-stripes pattern.  He thanked Sen. McCain for supporting Ukraine and asked him to continue to do so, to the emotional applause of those gathered.

Sen. McCain lifted up the shirt for the crowd to see and stated with a broad smile: “I’ll wear this the next time I am in Kyiv.”

After addressing a number of questions from the community, the senator summed up by stating: “I don’t want to leave you in a pessimistic mood.  The Ukrainian people are extremely intelligent, cultured, brave and very resilient. They proved themselves with their incredible resistance during World War II and facing enormous challenges throughout their history.  They simply will not allow aggression and thuggish behavior to prevail.”

Throughout the meeting, the senator made it clear that he thought whoever is elected to be the next U.S. president will do a better job of standing up for Ukraine than the present administration.

The afternoon event ended with the singing of the Ukrainian national anthem and group photos both in St. Michael’s hall and in the church itself.  Many in the community had a hard time deciding whether they wanted to be in the pictures or continue to snap away with their cellphone cameras.  A number of individuals were able to score selfies with the senator.