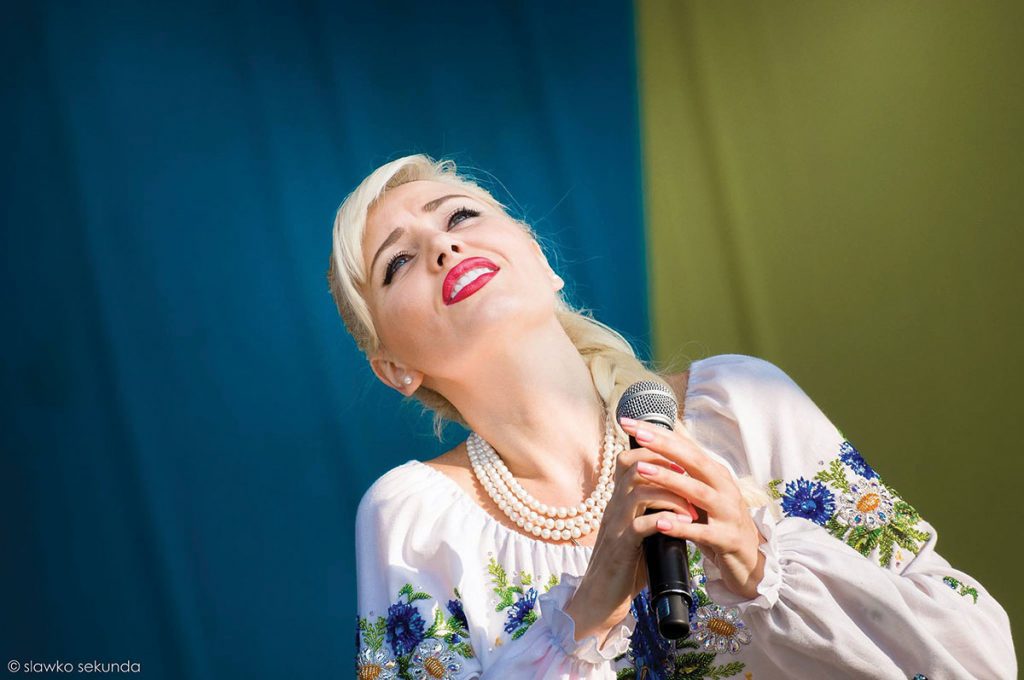 TORONTO – Citing the record turnout of 12,000 in attendance, Ukrainian Canadian Congress (UCC) Toronto Branch President Taras Bahriy said, “We are delighted with the many successes of the 24th anniversary of Ukraine’s Independence Day celebrations” held in Toronto at Centennial Park on Saturday, August 22.

Speaking from the UCC Toronto office, cluttered with banners, placards and nametags, and filled with UCC Toronto Branch members, Mr. Bahriy reflected on the six months of work that went into preparing for the event. “We are grateful to the members of our board of directors, to our 49 member organizations, and to the various non-member organizations for their active and participatory support in creating this yearly event. In particular, I would like to acknowledge the Ukrainian Canadian Women’s Council, Toronto Branch (President Stephanie Shymko) who managed the entry into the park to ensure an accurate count of attendees and to provide a program booklet to all,” he said.

The stage program commenced with opening prayers conducted by Archpriest Bohdan Hladio of the Ukrainian Orthodox Church of Canada and the Rev. Ostap Czorny of the Ukrainian Catholic Church, followed by a warm welcome from UCC Toronto Branch President Taras Bahriy. Special greetings were presented by Ukraine’s Consul General Liudmyla Davydovych, as well as Ambassador Marcin Bosacki of the Republic of Poland.

The afternoon was very ably emceed by Larysa Bajus and Myron Konyk. The program theme for this year was “Freedom Fighters – Then and Now: From Sich Riflemen to ATO.” The program was built around this theme by Lesia Movtchan, artstic director of Ukraina School of Dance, and Anna Kisil, president of the International Organization of Ukrainian Communities–Fourth Wave.

The UCC Toronto Euromaidan Committee showcased an evocative photo display of life in Ukraine today – soldiers, families, children, war at full tilt – that were sad but true. The attendees were moved to make donations to assist those in need in Ukraine and $7,660 was collected.

“This annual celebration could not have happened without the support of generous sponsorships, food and beverage sales, vendor displays and many volunteers,” said Mr. Bahriy. “Without our valued sponsors, the UCC Toronto Branch would not be able to host this event.” Platinum sponsors for 2015 were Northland Power, Buduchnist Credit Union and the Zaraska Family. Gold sponsors were Ukrainian Credit Union Limited, Horodynsky Farms, Caravan Logistics and the Ihnatowycz Family Foundation. Silver sponsors were Meest, New Canadian Drain and Plumbing, Halenda’s and Delores Yarmila Buka-Huculak.

“Volunteers begin work on Friday to set up the event, run it all day Saturday, and then take down and clean up on Sunday,” co-chairs Taras Antoniw and Lesia Bonk noted. Logistics captain Marijka Stadnyk piped in that she couldn’t do it without Roman Pryslawsky and Lydia Falcomer. Kudos went to Nadia Prokopiw and Irene Solomon, who managed the marketing and advertising and special mention was given to summer student Pawel Stech, who earned his stripes in event planning. UCC Toronto Branch executive members Markian Shwec, Peter Schturyn, Lesya Winnicki, Oksana Rewa and Olya Grod filled the rest of the key positions on the organizing committee.

To top off the day, a dance with the bands Zapovid and Hloptsi z Mista played to a capacity crowd until 11 p.m. Eugene Iwasiuk was thanked for running the stage and the sound systems.

“And so, while we are wrapping up this event, we are already planning for a special celebration next year in honor of Ukraine’s 25th anniversary of independence,” said a smiling Mr. Bahriy.