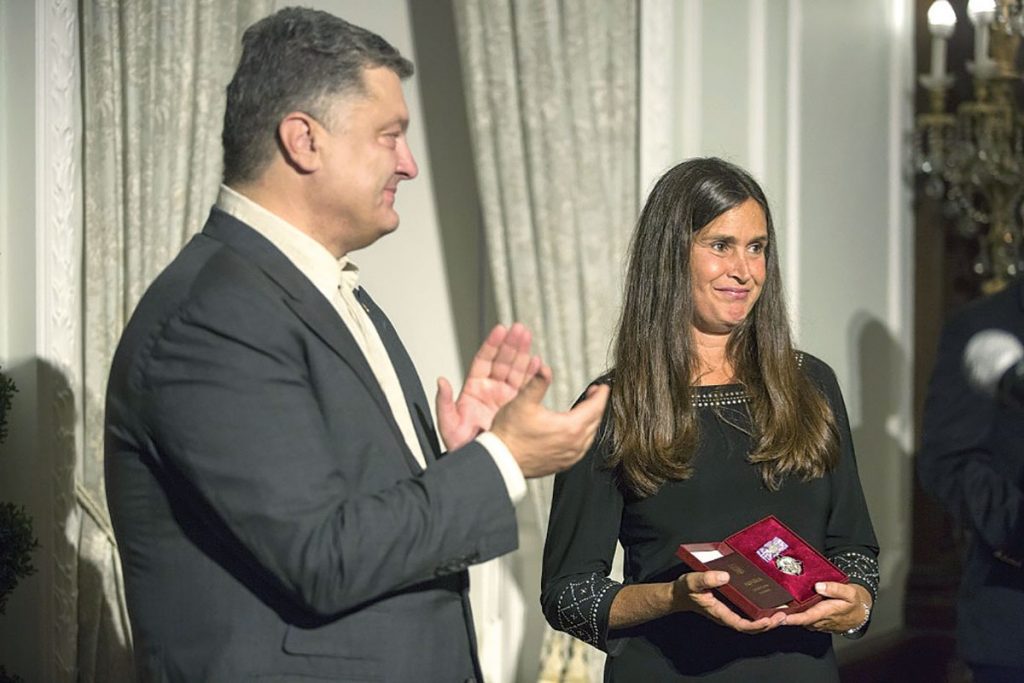 New York – The Ukrainian Congress Committee of America (UCCA) hosted a community meeting on Saturday, September 26, with President Petro Poroshenko, of Ukraine, and his wife, Maryna, at the Ukrainian Institute of America (UIA) in New York City during their trip to the United States for the opening of the 70th session of the U.N. General Assembly.

UIA Board President Dr. Daniel Swistel and UCCA President Tamara Olexy greeted the president and first lady upon their arrival and escorted the couple to the second floor, where they received a warm traditional Ukrainian welcome of bread and salt from Katya Czernyk and Sviatoslav Kukil, who were dressed in traditional Ukrainian costumes.

Following the singing of the Ukrainian and American national anthems to the accompaniment of Andrij Stasiw on the piano, the evening’s master of ceremonies, Ms. Olexy, invited Bishop Daniel of the Ukrainian Orthodox Church of the U.S.A. to deliver the invocation.

Bishop Daniel prayed for Ukraine, especially the men and women of the Ukrainian armed forces who fulfill their sacred obligation every day by preserving the national security and peace of the region. Bishop Daniel also offered words of prayerful greetings to President Poroshenko on the occasion of his 50th birthday.

“Mr. President, I feel that I can say, on behalf of all those gathered here this evening, that we will continue to do our utmost to strengthen the bilateral and strategic partnership between our two nations, and will pledge to continue our efforts to secure Ukraine’s right to self-determination,” she added.

Ms. Olexy also extended an invitation to Mr. Poroshenko to participate in the November unveiling ceremony of the Holodomor Memorial in Washington. She stated that this event will be “a truly historic moment for the global Ukrainian community…to show the world our Ukrainian unity… and solidify our common message – ‘Ukraine Remembers, the World Acknowledges!’ ”

Ms. Olexy went on to say “Mr. President, as you prepare to address the United Nations, please know that we stand in solidarity and unity with Ukraine. The time has come for the international community to uphold the founding principles of the United Nations – of maintaining peace and stability – and lend their full support and assistance to Ukraine. We wish you good health and continued fortitude in defending Ukraine’s territorial integrity, strengthening her democracy and ensuring her rightful place within the Euro-Atlantic community of democratic nations.”

In concluding her remarks, Ms. Olexy relayed the Ukrainian American community’s warmest wishes to the president on the occasion of his birthday, after which all assembled sang “Mnohaya Lita” (Many Years).

Andrij Futey, executive vice-president of the UCCA, then presented a special gift, an icon of the Virgin Mary written by well-known Ukrainian American iconographer Daria Hulak-Kulchytsky, from the Ukrainian American community to the president on the occasion of his birthday. Mr. Futey remarked, “…We know from history that the Virgin Mary was the protector from enemy hands and the key to life from the days of Kyivan Rus’ through the Kozak period to the present day. Mr. President, may the Virgin Mary always protect you and bless you in your fruitful work for the good of Ukraine and all her people… Glory to Ukraine!”

Mr. Poroshenko then took the podium and graciously thanked the Ukrainian American community, noting that it is extremely important for Ukrainians to feel unity within the world today. “We urgently need trans-Atlantic unity. We need solidarity with Ukraine, because there is nothing more important in the world today than the crisis in Ukraine. It is a civilizational struggle, not an internal conflict, as the aggressor is trying to portray,” he said.

The president also thanked the Ukrainian American community for its contributions to the development of the Ukrainian army, noting “We are fighting for the freedom of the world, democracy in the world. That’s why we will win.” According to Mr. Poroshenko, the best scenario for Ukraine would be if Russia withdrew its troops and released the Ukrainian hostages. Ukraine would then be able to restore control over its border, and peace would return quickly to the Donbas. The key element of de-escalation, he stated, is the Minsk agreements.

The president concluded that it would be a “good tradition” to begin every foreign visit with a meeting with the diaspora, calling them “true heroes who made a significant contribution to Ukraine’s struggle for freedom and are now making a vital contribution to the reformation of the country.” The diaspora contributes greatly to the international support for Ukraine, and “such support is the key to our victory,” Mr. Poroshenko said.

Following his remarks, Mr. Poroshenko bestowed the Order of Princess Olga (III grade) on UCCA President Tamara Olexy; and presented the Order of Danylo Halytsky to the family of Ukrainian American Mark (Markian) Paslawsky, who was killed in the Donbas defending the independence and sovereignty of Ukraine from militants and occupants.

The attendees honored the memory of the fallen warrior with a moment of silence. “For me, he is an example of a true Ukrainian – a patriot and a Christian. He died as a hero defending Ukraine,” President Poroshenko said.