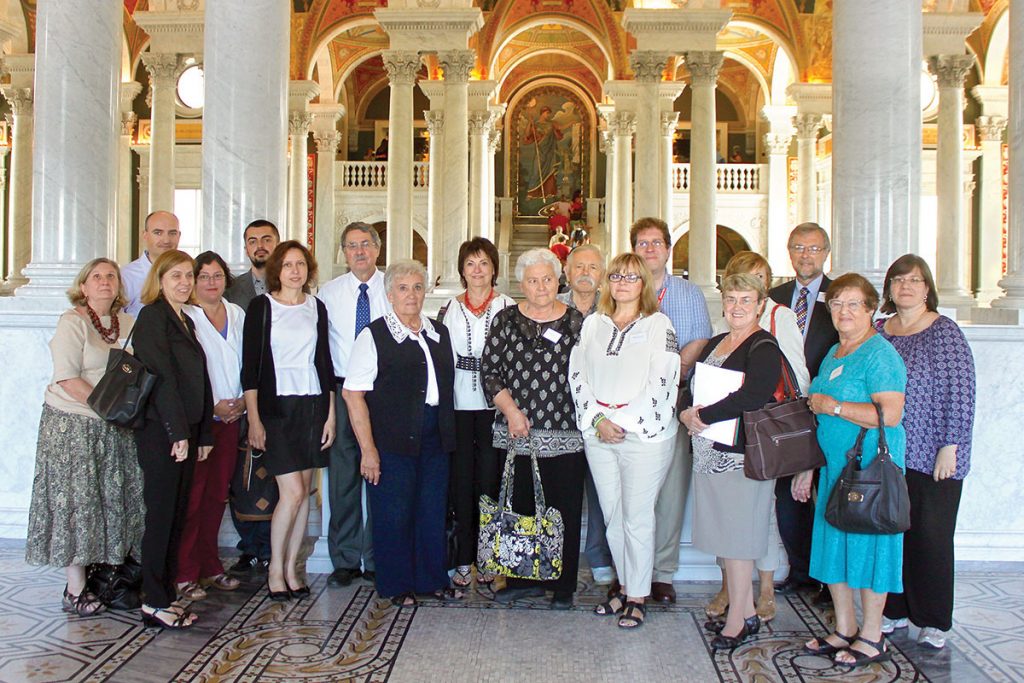 Anna Whittington
Members of the Ukrainian Heritage Consortium of North America in the Great Hall of the Library of Congress.

WASHINGTON – The Ukrainian Heritage Consortium of North America (UHCNA) held its fourth conference in Washington at the Library of Congress on September 18-20.

Congresswoman Marcy Kaptur (D-Ohio), chair of the Congressional Caucus on Ukraine and the conference’s keynote speaker, put the work of museums and cultural institutions into context. If you don’t know your past, it’s hard to craft a future, she underscored. Referring to her family’s roots in Ukraine, she offered accounts of her own startling discoveries of diaries, oral history projects and other valuable documentation.

Rep. Kaptur commended the UHCNA participants for their work, emphasizing how important it is for Americans to collect and preserve the record of Ukrainian culture and immigration to America. This is a critical element in America’s history that has a major influence on our country’s policies today, she noted, adding that this aspect is neglected by mainstream cultural and political policymakers. The conference participants are providing an invaluable service to Ukraine and America, Rep. Kaptur stated. She offered suggestions on how to make the Ukrainian story more prominent and pledged to continue her own efforts in that regard. Her keynote address and the conference proceedings were covered by the Voice of America.

UHCNA is an umbrella group of Ukrainian American museums and cultural institutions that has been meeting regularly since Cleveland’s Ukrainian Museum-Archives organized the inaugural conference in 2011 to exchange information and coordinate exhibit and collections policy. Subsequent meetings were organized by the Stamford Ukrainian Museum and Library (2012) and the Ukrainian National Museum in Chicago (2013). There was no meeting in 2014 because of the urgent need to focus on the Euro-Maidan and subsequent events.

This year’s conference was organized by Jurij Dobczansky, senior cataloguing specialist at the Germanic and Slavic Division of the Library of Congress (LC) and a long-time cultural leader in the Greater Washington Ukrainian community who called on the resources of the LC Professional Visitors Outreach Program.

The program included an informative session with Sara-Joelle Clark, Laura Ivanov and Jaime Monllor from the United States Holocaust Memorial Museum, who informed UHCNA members about the International Tracing Service that the museum operates. They put out a plea to the group to contribute stories of Ukrainian victims of Nazi aggression to their archives, as well as the stories of Ukrainian slave laborers in Germany’s World War II economy and the huge refugee wave that ended up in the post-war displaced persons (DP) camps run by the United Nations Relief and Rehabilitation Administration. Their presentation was especially poignant because it featured DP-era documents and photos of Bohdan Kantor, a conference participant and Library of Congress staff member.

Other presentations at the LC included Larisa Pastuchiv on copyright law, Mr. Dobczansky’s presentation of the Ukrainian ephemera collection from the Euro-Maidan, Cathy Kerst and Andrew Cassidy-Amstutz on military veterans’ oral history and ethnic collections in the American Folklife Center, and Brett Carnell on digitizing visual materials in the Prints and Photographs Division.

On Saturday, September 19, the UHCNA met at the Ukrainian Catholic National Shrine (even as a banner was being hung to welcome the visit of Pope Francis) to present reports on activities over the past two years. The Saturday and Sunday sessions were hosted by the shrine’s Library. The general impression was that a small number of dedicated activists have been doing an enormous amount of work to collect, preserve, display and digitize unique and priceless collections. In an informal survey, Ms. Klimchak reported that the participants present had contributed more than 250 years of service. Mr. Fedynsky quipped: “How much is that at $25 an hour?”

It was gratifying that UHCNA members were able to report not only on the exchange of information and good wishes, but also cooperation on exhibits and projects. In connection with the conference, participants visited the Holodomor Memorial to be dedicated on November 7 and the 13th Washington Ukrainian Festival on the grounds of St. Andrew Ukrainian Orthodox Cathedral in Silver Spring, Md.

The conference concluded on Sunday, September 20, with breakfast and a wrap-up session at the Ukrainian Catholic National Shrine, followed by a divine liturgy. UHCNA participants agreed to meet in October 2016 for their fifth conference, which will be jointly sponsored by the Ukrainian Historical and Education Center in South Bound Brook, N.J., and The Ukrainian Museum in New York.